When and where is the 2023 FIFA Women’s World Cup?

How do I apply for tickets from U.S. Soccer’s allotment of 2023 FIFA World Cup Australia & New Zealand tickets?

U.S. Soccer receives a limited number of tickets to USWNT matches at the World Cup, including each of the USA’s three Group Stage matches. Due to high demand, tickets will be distributed via a Random Weighted Draw exclusive to U.S. Soccer Insiders. U.S. Soccer Insiders can apply for tickets to all USWNT matches by accessing a Ticket Office portal exclusive to U.S. supporters. The application window dates will open on Monday, October 10th. The application process is not first come, first serve. Fans can apply at any point during the application window.

Pro tip: Circle Insiders will have best access to tickets (access to the first group in the draw, and each subsequent group) – so consider upgrading your Insider membership for the best chance at tickets. You can upgrade by going here.

What are the eligibility requirements to apply for tickets as a U.S. Soccer fan?

First, you and all your guests must be active U.S. Soccer Insiders, at any level. (Guests are individuals that would use the applicant’s other purchased tickets.) If they are not already an Insider – no problem. Have them join at any Insider level by the end of October to enter. Current Insiders will have until the end of October to upgrade their membership level. Join at ussoccer.com/insiders or by clicking here.

Below is a full list of eligibility requirements to apply for World Cup tickets. Applicants must:

Does being a U.S. Soccer Insider and completing the application process guarantee me 2023 FIFA Women’s World Cup tickets?

No. Insiders who apply through the Ticket Office portal are not guaranteed tickets, as the number of tickets requested will likely exceed the allocation available. If or when this happens, a weighted random selection draw will be conducted to determine which applicants are awarded tickets. 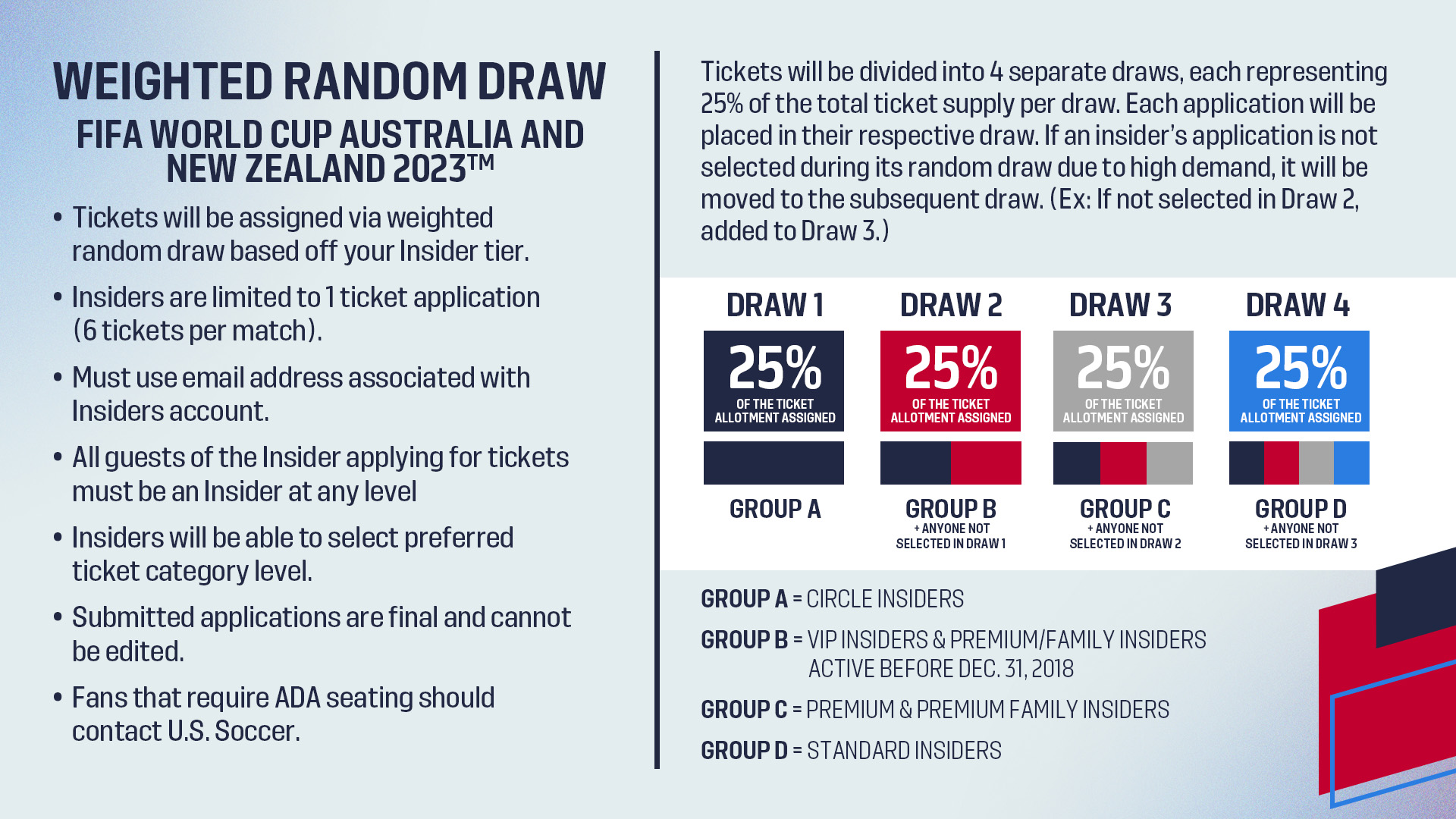 Can I apply for tickets to non-USA matches in Australia and New Zealand through U.S. Soccer’s allotment?

U.S. Soccer’s allotment is for tickets to U.S. matches only, including each of the USWNT’s three Group Stage matches. U.S. Soccer fans also have the opportunity to request conditional tickets for the USWNT’s possible Knockout Round games, including the Round of 16, Quarterfinals, Semifinals and Final/Third Place Game. Conditional tickets will only be issued if the U.S. advances.

For those wanting to purchase tickets for non-U.S. Soccer matches, you can do so directly through the FIFA Ticketing page.

Yes – though we recognize it may not be for everyone. The U.S. Soccer Patrons Program to Australia and New Zealand is the Federation’s most exclusive travel program, which includes accommodations, match tickets, behind-the-scenes access, ground transportation, U.S. Soccer gear, and more. Availability is very limited and participation is made possible through a meaningful donation supporting the U.S. Soccer Development Fund. Contact vip@ussoccer.org for details.