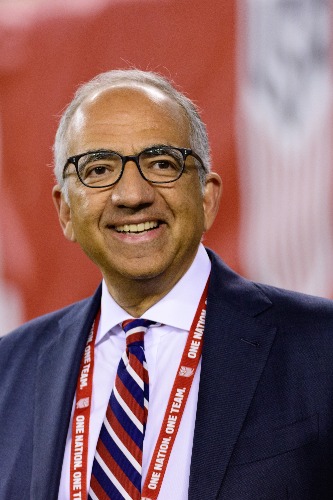 A lifelong soccer fan, I served U.S. Soccer as a volunteer for more than a decade. I’m running for U.S. Soccer President because I believe that the years ahead will be the most important period in the history of our Federation and a once-in-a-generation opportunity to transform soccer in America for decades to come.

It was an honor to serve as U.S. Soccer President from February 2018 until March 2020, and I remain proud of the progress that our Federation achieved during this time. In particular, we won our bid to co-host the FIFA World Cup 2026™; made record investments in players, coaches and referees at all levels; increased support for our national teams; boosted resources for our youth and adult players at the grassroots; enhanced coaching and referee education; and passed important reforms to make our governance more open and transparent.

Over the past two years, I’ve continued to do everything I can to help grow the game, in the United States and around the world. As immediate past president, I remained on the U.S. Soccer Board of Directors and on the Commercial Committee until this past September. I also continued to represent our Federation as a member of the Concacaf Council and the FIFA Stakeholders Committee.

Since September 2021, I have served as an unpaid senior advisor to FIFA President Gianni Infantino, focusing on ways to grow football globally, especially how we can bring even more tournaments, opportunities and investments to the women’s game.

Prior to being elected U.S. Soccer President, I helped guide the Federation as a board member, serving as Vice President, Treasurer, Chair of the Budget Committee, and as the Federation’s first Independent Director, starting in 2007.

A business executive with more than 30 years of experience in international finance, I was named a partner at Goldman Sachs in the early 1990s and later appointed vice chairman for Asia. I advised governments, global corporations, and international financial institutions across Europe, the Middle East and Africa (EMEA) as well as Asia. Now retired, I continue to serve as an honorary, unpaid advisor to the firm. From 2005 to 2015, I was an independent director of BHP, the world’s largest natural resources company, where I focused on governance, finance and risk management.

Born to a Colombian mother and Portuguese-Indian father in 1956, I immigrated to the United States from India with my widowed mother and three siblings at the age of 15. I became an American citizen 10 years later. I am a graduate of Miami Beach High School, Harvard College and Harvard Business School. A dedicated philanthropist, I have supported nonprofit causes that reflect my commitment to education and healthcare and have held director-level positions at several charitable foundations.