Bedoya’s journey has taken him to clubs in Sweden, Scotland, France and now to his first action in Major League Soccer as a Designated Player for the Philadelphia Union where he intends to prove himself once again for a new club and for his country.
May 27 2015
The Journey: USMNT

His destination: the Philadelphia Union.

After spending his entire professional career in the top flights of Sweden, Scotland and France, Bedoya returned Stateside on deadline day, becoming the newest and highest profile member of a Union side in the midst of an intriguing turnaround.

“It’s been a long time coming,” he told ussoccer.com upon his arrival to Washington, D.C. where he was meeting his new team ahead of the next day’s match against D.C. United. “I’ve been longing to come back and play Stateside in front of my family and friends. Being in Europe, it’s so far from my family. It’s my first time playing in MLS, so I’m really looking forward to the experiences.”

It’s not the first time Bedoya had entertained the idea of joining MLS. The Philadelphia Union came close to bringing him to MLS in January, but things fell apart when they were unable to move up in the league’s allocation ranking in order to earn his signature. Though the Union had put in a lot of leg work to bring him home again, two other clubs – Chicago Fire and Columbus Crew SC – also made their interest known as deadline day approached.

“This whole process happened very quickly,” said Bedoya. “It was confusing, complicated, annoying, but I guess that’s the way the MLS system works out.” 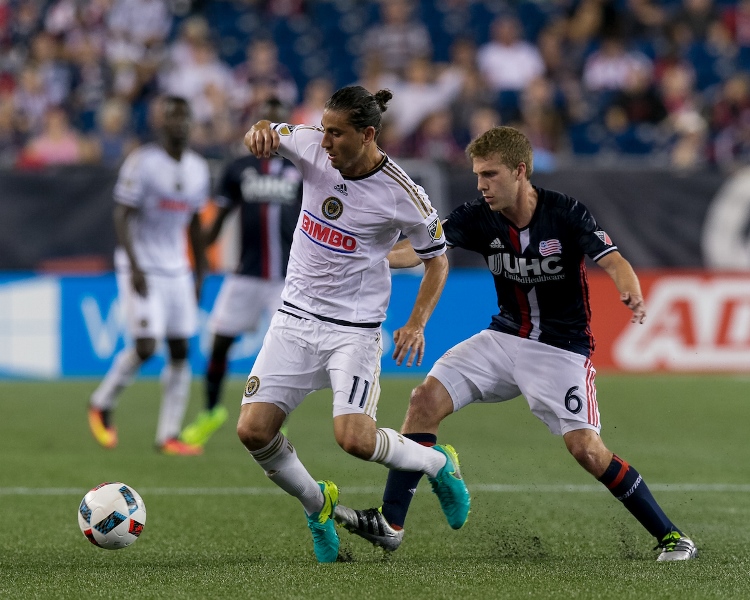 Bedoya in his first action after joining the Philadelphia Union; the team won 4-0 vs. the New England Revolution.

On Thursday, July 31, Bedoya received a call from his agent saying Major League Soccer was interested in bringing him home. He took the weekend to review the offer and by August 1 – two days before deadline day – things had accelerated quickly.

“Tuesday was when talks started coming down seriously between the teams and the league. There were three teams interested at the top of the list trying to make things happen with the allocation order and trades behind the scene.”

Though Philadelphia had seemed to do the most leg work to bring Bedoya home – head coach Jim Curtin and Technical Director Chris Albright met with him during a trip to Nantes to sign Fernando Aristiguieta – MLS rules made things more complicated for them to just sign him. The allocation order, a list by which MLS teams abide by in order to acquire high-profile players from abroad, gave top priority for the signing to Chicago Fire by virtue of their last-place finish the previous season.

“Calls with the coach of the Chicago Fire [Veljko Paunovic] personally, that went well,” Bedoya said. “The way everything works, I was sure I was going to Chicago, I was set up to go there. That got put on hold for whatever reasons. Tuesday night, I stayed up all night. At 12:30 a.m. I got a call again that said Columbus was interested. An hour later I got a call saying they were out, for whatever reasons it didn’t work out.”

After having his potential destination change multiple times in the span of a few hours, by 2:30 a.m. another call came.

“Philly was back on and maybe something could happen,” Bedoya explained. “I went to bed and woke up the next morning to news that Philly’s going to try to go ahead and do it.”

The Union had negotiated a trade with the Chicago Fire for the top allocation spot, opening the door for the New Jersey-born attacker to remain close to home.

“Philly was interested in me last year, so I really appreciated that,” he continued. “With their loyalty and having a lot of faith in me, it was the place I wanted to go to. You want to go to a club that really wants you and believes in you and thinks you’re going to make a difference.”

After a number of years missing out on the MLS Cup Playoffs, the Union have bounced back in 2016. Bringing in long-time U.S. international Earnie Stewart as Sporting Director during the offseason, the side sat on top of the Eastern Conference early in the season and currently sits fourth, just four points back of pole position in the tight East table.

“We’re trying to do things in a different manner and trying to build that foundation for years to come,” Stewart told ussoccer.com. “With a good draft in the winter, this transfer period we thought it’d be good to add something: the American player that brings his lunch pail to work every day, and Alejandro checks all those boxes. He’s a player that fits the profile of a Philadelphia Union player. He comes into work every single day. He does not like losing, which is a good characteristic.”

Already with a solid nucleus, Union head coach Jim Curtin was high on bringing Bedoya’s experience, versatility and strong character into his side.

“Alejandro is a player that I’ve always had an eye on,” he told ussoccer.com. “He is a guy who has done it at the highest level in Europe for our National Team. He’s very consistent, can play multiple positions, and he’s had success at all of them. You talk to Jurgen Klinsmann and he’ll say he’s one of his guys that every day he brings it in training; he can count on him and rely on him and I see the same things.  You get talking to Alejandro off the field and you get an idea of how good a person he is. That matters to me. As a coach I want guys with high character, and Alejandro checks that box.”

Bedoya joined a Philadelphia Union team that already featured his former Rangers teammate Maurice Edu as well as Chris Pontius, who he’s spent time with in past MNT camps. Just as he learned he would be headed to Philly, he got a call from another close friend, Charlie Davies.

The two Boston College products had never played together collegiately. Davies, who left the Eagles to sign a professional contract with Swedish club Hammarby in 2007, helped advise Bedoya on his own potential move to Sweden years later.

“While I was at BC, he’s the one that told me a lot about how living in Sweden was and how he thought it was a great league to jumpstart your career in Europe,” Bedoya said about Davies. “That’s who I went to go visit in Sweden to get a glimpse of what it was like. Not just living in Sweden, but Europe and what the soccer was like. I stayed with him for a week before my senior year and I knew that’s where I wanted to be.”

Davies had heard the news of Bedoya’s pending move to Philadelphia from a teammate at the New England Revolution a couple days before it happened. On deadline day, Davies himself learned that he’d be joining Bedoya and the Union via trade from the Revolution.

“After I got my medical in Paris, Charlie facetimed me and said, ‘I’m getting traded. Do you want to guess where?’”

Davies has had his share of trying experiences over the years. Following a 2009 car accident that claimed one life and nearly his own, Davies made a miraculous recovery, returning to professional soccer a year later. Earlier this year, when getting a scan done on a groin injury, doctors discovered a cancerous tumor.

Through both life-changing instances, Davies found a supportive friend in Bedoya. Now united in Philadelphia, the speedy attacker is looking forward to his on-field partnership with his friend.

“He’s a guy I could confide in and trust,” Davies told ussoccer.com “He’s just a genuine, hard-working guy. On the field, we’ve only been able to play together at various National Team camps. I think now it’s great to finally be able to play with him on the same team. His work ethic is second to none, and he’s a guy that will provide me with a lot of chances to score. The future is bright for us here in Philadelphia.”

As for his move back to MLS and what it means for his role with the U.S. Men’s National Team, Bedoya made sure to discuss his decision with Jurgen Klinsmann prior to finalizing the deal.

“I called him immediately when I knew about the interest and told him it could be a possibility if it was the right situation,” Bedoya said. “Jurgen was pretty honest with me. He just let me know he was happy for me and he understands it’s important for me. He was very open and let me know as a player he always knows I give everything. No matter what, I’m a competitor and me coming back here wasn’t like I was coming to settle and just be with my family and be comfortable. For me it’s about coming back to prove something.” 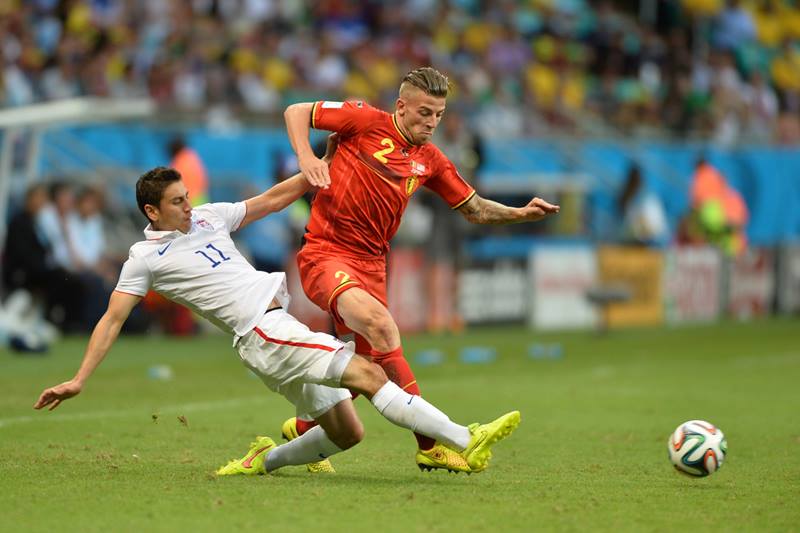 Bedoya, in knockout round action vs. Belgium, featured in every game of the USA's run to the 2014 FIFA World Cup Round of 16.


While the immediate goal is helping the Union back to the MLS Cup Playoffs for the first time since 2011 and securing the club’s first trophy in its history, Bedoya’s long-term sights are set on helping the U.S. reach its eighth-consecutive FIFA World Cup at Russia 2018.

“The 2018 World Cup is definitely a goal I have in mind. I want to play in my second World Cup. The last World Cup was an incredible experience and I want to be a part of it. Obviously making this move, that was in the back of my mind. Last World Cup I know that almost half the team was coming from MLS, and I’ve done my thing in Europe. I’ve stood my ground there, I battled, I’ve been challenged and I was able to find my way into one of the best leagues and be one of the only Americans abroad that play consistently week in and week out on a club team in a top league.

“I’m very proud of that, and I know I have to come here to MLS and prove myself again. Prove myself to Philly, the coaching staff, my teammates, to fans, and to the league that I’ve still got what it takes to be a factor at the 2018 World Cup. Nothing’s going to change. [Clint] Dempsey, ever since he came back to the States, he’s been scoring goals for the National Team, still doing a lot, and same with some of the other guys who have been contributing a lot.

“It doesn’t change anything. I’m probably going to have to work a lot harder, but I’ve always been the guy that’s never going to back down from any challenge.”