Guzan makes the move (literally) to newly promoted Premier League club Middlesbrough, looking to fight for the top goalkeeper spot and for a fresh start on and off the field.
May 27 2015
The Journey: USMNT

Raising a family with three boys in the southwest Chicago suburb of Homer Glen, sports were at the epicenter of life in the Guzan household. Basketball, baseball and soccer took up much of the family’s time over the course of the week and when they weren’t running off to a game or practice, the Guzan used every bit of sunlight to get in one more goal, one more hit or one more shot in neighborhood pickup games with friends.

The youngest among three competitively charged boys, Brad Guzan often had to work his way into regular involvement in neighborhood games.

“He had to claw his way up into the hierarchy,” remembered Brad’s father Richard Guzan. “There were often times when there were raised voices and a little pushing and shoving, but a lot of it was clowning around.”

Developing that mentality to fight for his place would become a hallmark for Guzan, serving him well on his rise to the top for club and country.

Over the years Guzan excelled at both soccer and baseball and no matter which sport, because of his size, there were always claims that he was too old to be playing with whatever team he as on at the time. Growing older, Guzan was involved in travel and state teams in both sports and as time commitments with school became greater, he was forced to choose one sport to focus on.

Seeing his older brother play goalkeeper in high school, the idea of denying crosses and stopping goals piqued Guzan’s interest, but his size often saw coaches dictate that he played as an outfield player. Guzan began training on the side as a goalkeeper at 12 years old and did his best to maintain a high level, developing his skills there, hoping to make it his full-time position.

“Whether it was an older B team or whatever it may have been, I wanted to keep that part going in terms of being a goalkeeper one day,” said Guzan. “Eventually I started doing Olympic Development Program at the time as a goalkeeper.  Long story short, I made it to the state team and the regional team, but I still wasn’t playing goalkeeper consistently with my club team. I was invited to ESP camp and did well there as a goalkeeper, and that’s when a lot of colleges started to ask, ‘Who is this guy? We’ve never seen him play before.’

His skill as a goalkeeper led to interest from a number of big soccer schools, and being in Chicago, Guzan said he was tired of diving around on indoor soccer fields and concrete, opting to looking at schools that had warmer weather.

He made official visits to the University of Virginia and Cal Berkeley before deciding on the University of South Carolina. With a view towards becoming a professional, heading to Columbia in 2003 allowed Guzan ample playing time early on in his collegiate career.

Guzan was a standout for the Gamecocks, playing every minute of the school’s 38 matches during his freshman and sophomore years. Between collegiate seasons, he suited up for the Chicago Fire’s PDL side, playing along with future U.S. internationals Drew Moor and Chris Rolfe as the team advanced to the third round of the Lamar Hunt U.S. Open Cup and earned the league’s regular season championship in 2004.

Guzan with then Chivas USA head coach Thomas Rongen at the 2005 MLS Super Draft in Baltimore.

His play was enough to garner a contract offer from Major League Soccer after his sophomore year, but the desire from his mother Karen, a teacher, to make sure he finished college was strong.

“When the opportunity came to pursue his dream, as a dad I wanted to see him pursue that,” recalled an emotional Richard Guzan. “On the other hand, his mother being a school teacher and knowing the importance of an education, that was an extreme battle between a mom and her son. She wanted to be sure he had the education to carry him through life.”

Worried that he could finish school at South Carolina but not have the contract offer at the end of his four-year collegiate career, Karen and Brad brokered a deal that allowed him to pursue his professional career with the promise that he would eventually go back and finish his college courses.

The promise is long running. Guzan has completed coursework here and there over the years, but hasn’t yet attained his degree.

“The family joke is that he will graduate college with his godson, who is in eighth grade,” said Richard Guzan.

“At this point, I think I’ll push it back to graduate with my one-year-old son,” joked Brad.

Drafted second overall by expansion side Chivas USA in 2005, Guzan earned early playing time in what was a woeful season for the MLS newcomers. Despite a tough rookie campaign, he impressed enough as a 21-year-old to earn his first U.S. call-up that January and first MNT cap a month later in a 4-0 win against Guatemala.

Under the guidance of Bob Bradley at Chivas USA the next year, Guzan found more league success as the club[Office1]  qualified for the MLS Cup playoffs. After Bradley departed to become the new coach of the U.S. Men’s National Team in 2007, the core he helped build saw continued success at Chivas, with Guzan winning the MLS Goalkeeper of the Year Award in 2007.

He continued to earn call-ups for the MNT under Bradley, and slated to be the starting goalkeeper for the U.S. at the 2008 Summer Olympics in Beijing, Guzan moved to English side Aston Villa that July.

The rise in competitiveness made getting time on the field tougher for Guzan at Villa. Serving as the understudy to legendary U.S. goalkeeper Brad Friedel, playing time was sparse, with his only extended run of games coming during a loan to Hull City in 2011. The situation wasn’t much different when returning to play for the National Team, as Guzan sat behind Tim Howard.

Hoping to gain the starting role with Friedel’s transfer to Tottenham Hotspur that summer, he instead played backup to Irish international Shay Given and even saw his release from the club that summer, before being re-signed by new manager Paul Lambert.

Entrenched as Villa’s number one goalkeeper, Richard and the family back in Chicago were finally able to see Brad play week-in and week-out once again. While they celebrate Brad’s achievements, his father says the times when his son is put in bad positions are the most trying.

“You watch your son be the goalkeeper and the play developing to put the goalkeeper in a bad situation, and as a dad you’re hoping for the best,” he said. “Often times the goalkeeper is not focused on one player; he’s worried about a second player. I try to put myself in that place - which decision would I make? It’s not always the right decision and sometimes it is.”

No matter the result, whether that night or a day or two after, the 31-year-old goalkeeper will phone home to speak with his father about his performance in goal that day. The ritual is always an honest one and something that keeps Guzan striving for improvement.

“We will have a conversation, and he’ll ask what I thought, and sometimes I’ll have to say that you could’ve done better,” said Richard. “But it is what it is, and it’s just time to prepare for the next game. That one’s over with and you can’t dwell on it. You just have to get ready for the next game.”

Last season, a lot of the calls probably weren’t too much fun for father or son, as Villa finished bottom of the Premier League, suffering their first relegation from the English top flight since 1987.

Unwavering, Guzan countered a tough club season by backstopping the U.S. to a fourth-place finish at Copa America Centenario this past summer, keeping him in the shop window for a move to stay in the Premier League. The transfer came at the end of July, when Guzan signed with newly promoted side Middlesbrough.

Entering a club that had also signed form Barcelona netminder Victor Valdes during the offseason, Guzan once again walked into the familiar circumstance of having to compete for a starting role. Guzan says that challenge serves as fuel to the fire for him.

“When you come into a new team, that motivation of trying to earn the respect of your teammates and coaching staff, you want to prove that you belong and you should be there and can be counted on. Day in, day out, you have to give everything. That’s not to say when you’ve been somewhere for a long time you haven’t given everything, but when you walk into a new locker room, you have to perform and earn that respect because it’s not given. That’s part of the excitement, it’s part of the challenge of coming to a new place.”

While the quest to be Middlesbrough’s number one is far from over, Guzan did get off to a good start. Making his club debut in a huge derby away to Sunderland on August 21, he made four saves, including a highlight-reel stop to deny a blistering effort from the Black Cats’ Patrick Van Aanholt to hold up a 2-1 away win. 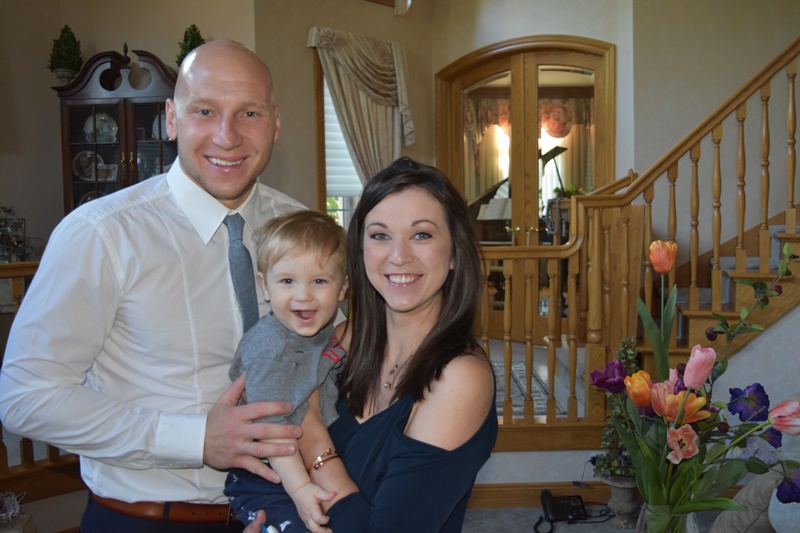 Now with a one-year-old son, balancing the challenge of competing for a starting spot for both club and country with becoming a father has changed Guzan for the better.

“Being a dad is the best thing in the world,” said Guzan. “I wouldn’t change anything in terms of all of the experiences that I’ve had via soccer and via life in general. In terms of it changing me, I think it’s calmed me down a little bit. It’s also allowed me to understand that you have to be flexible and adjustable in terms of your schedule -- my one-year-old rules the house now.”

While his career is far from over, dwelling on the impact his family has had on his life, the 31-year-old ‘keeper does have plans for making sure his son, so far raised in England, connects with his own family roots.

“The best part is when you do get to come back to Chicago, seeing your family interact with your son is the best feeling. Knowing at some point that we’ll eventually come back to this area and end up settling down. This area will most likely be home and it’ll be nice to see family on a daily basis, they can see Aiden and he can see some of the different experiences that I had growing up.”