The USA's Big Game Player Finds Inspiration from Every Moment in Life in Order to Live It to Its Fullest and Always Give his Best on the Field.
May 27 2015
The Journey: USMNT

Clint Dempsey is one of the best players the United States has ever produced and perhaps one of the least likely stars of American soccer.

The only American to score in three different FIFA World Cups and the MNT’s all-time leader in World Cup Qualifying goals with 14, Dempsey’s story began in Nacogdoches, Texas, a remote town 110 miles northeast of Houston which some of the locals call “Nac-Nowhere.” Rising from humble beginnings, Dempsey was forced to overcome some early life adversity in order to chase his soccer dream.

The commitment from his parents to his soccer dream was huge, as the family not only scraped together the money for him to play for the famed youth club Dallas Texans, but drove a grueling three-hour commute each way to Dallas, three times a week for training and matches.

When he was 12, the Dempsey family received a devastating blow when his sister Jennifer, a budding tennis sensation, died of a brain aneurysm at 16-years-old. The death hit Dempsey particularly hard, and he admits overcoming the grief and recognizing his family’s commitment to his soccer career provided the bedrock for the future MNT player.

“Losing my sister at a young age, that was a big motivation,” Dempsey told ussoccer.com. “To realize that life is short and to make the most of it. My parents driving me all the way to Dallas as a kid – three hours one way and three hours back – for training and games. Having that instilled in me at a young age, I think is what gave me a strong foundation.”

That foundation led him to Furman University, where he went on to have a successful three-year collegiate career with the Paladins. Despite the promise shown from youth level into college, Dempsey was never involved in the U.S. Youth National Team setup. In fact, he first came on the radar of the National Team program late in his time at Furman, when a U.S. scout who was there to see teammate Ricardo Clark took notice of the flair Dempsey had on the ball and intensity in his play.

He impressed enough to earn a spot on the 2003 U.S. U-20 World Cup team before being selected eighth overall by the New England Revolution the following year.

Former Revolution striker and ESPN analyst Taylor Twellman recalled Dempsey’s arrival into preseason camp with “one of the worst haircuts” he’d ever seen; but, the shaggy-haired Texan quickly made his mark on the team.

“Clint Dempsey was a rookie who showed up that was very quiet, was very to himself,” said the former U.S. MNT forward. “Then all of a sudden, the first scrimmage happened and he two-footed two senior players, scored two goals and we all looked around and said, ‘Who is this kid?’”

Tallying seven goals and an assist in his first professional season, Dempsey won MLS Rookie of the Year and even received his first MNT cap in a 1-1 draw with Jamaica in World Cup Qualifying that November. Riding high after helping the Revolution reach back-to-back MLS Cup Finals appearances and scoring in the 2006 FIFA World Cup, Dempsey set his sights on a new challenge, moving to English Premier League side Fulham in January 2007.

Once again, he would have to prove himself to earn his place on the field for the Cottagers, but his first goal for the club ended up being a game-winner in a 1-0 home victory against Liverpool, saving Fulham from relegation that season.

While Dempsey would be a consistent performer at the west London club, management was the exact opposite, as he played for five different coaches in his six seasons at Craven Cottage. The turnover at the top forced the American attacker to make his case time and again, but he responded to the challenge, most notably during Fulham’s run through the 2009-10 UEFA Europa League. In the Round of 16, Dempsey delivered an incredible chip in Fulham’s 4-1 second leg win against Italian giants Juventus before becoming the first American to play in the Europa League Final, a 2-1 extra time defeat to Atletico Madrid.

Dempsey moved to north London in 2012, taking up a decent stint with Tottenham Hotspur before shaking up Major League Soccer with his decision to return stateside to play for Seattle Sounders FC.

His form for the MNT continued as he captained the U.S. to a seventh-consecutive World Cup appearance and scored a crucial first minute goal in the team’s 2-1 statement victory against Ghana in the opening match of the 2014 FIFA World Cup.

Like so many of Dempsey’s international strikes, the opener against the Black Stars outlines a key aspect of the MNT attacker’s international resume: an ability to score clutch goals in big moments. In fact, 36 of Dempsey’s 52 international goals have come in Qualifying or tournament competition for the United States, with the .692 percentage rate ranking highest among the team’s top four all-time goal scorers.

While Father Time ticks away on the 33-year-old’s career, his international numbers of late have been nothing but stellar, with 13 of his 52 international goals – exactly 25 percent -- coming in the last two years. Eleven of those came in the CONCACAF Gold Cup, FIFA World Cup Qualifying or this past summer’s Copa America Centenario, and seven of his strikes in official competitions were game-winners.

Twellman, who credits Dempsey’s family and role as a father with helping him mature as a player, says he’s seen his serious, former teammate smile more in the past two years than in the previous 10 combined.

“I think he’s had some moments where he’s smelled the roses a little bit,” said Twellman of the outside factors that have perhaps coincided with his international goal scoring form. 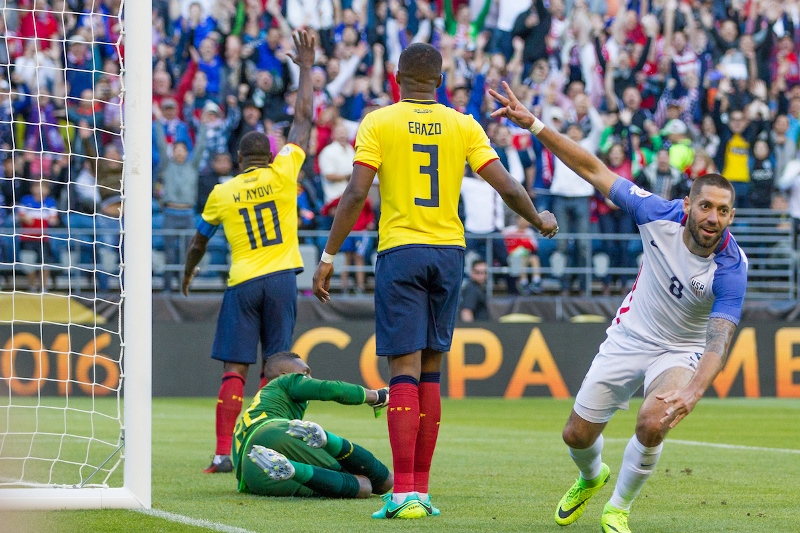 Dempsey scored the USA's opening goal vs. Ecuador in the 2016 Copa America Quarterfinals.

With his clutch goals helping the U.S. qualify for the semifinals of the historic Copa America Centenario, Dempsey ranks 2016 as one of his best years with the Men’s National Team.

“It’s up there, just because of the importance of the goals scored in the games,” he said. “A must-win game against Guatemala and being a part of helping the team get out of the group in Copa America, and then playing a part in the Quarterfinals. It’s been a great year. Hopefully I can help the team again in September.”

In the short term, those World Cup Qualifying matches in September at St. Vincent and the Grenadines and home against Trinidad & Tobago are the next tests as the U.S. looks to book its place in the Final Round of CONCACAF Qualifying for the 2018 FIFA World Cup.

Having already overtaken Landon Donovan for the team’s all-time lead in World Cup Qualifying goals, the upcoming matches provide Dempsey an opportunity to chip away at Donovan’s all-time scoring record of 57 international strikes.

“While the maturity level has changed, the one thing that Clint hasn’t changed is that there is a chip on his shoulder the size of Mt. Everest,” added Twellman. “As long as that chip remains, the kid will score goals for the National Team, he’ll score goals in Major League Soccer and he’ll ultimately be the all-time leading scorer for the U.S. Men’s Team.”

While Dempsey admits that he’s thought about the scoring record and joining DaMarcus Beasley as the only American to play in four FIFA World Cups, his ultimate goals come back to making sure the U.S. is playing at Russia 2018 and bringing glory to his club in Seattle.

“I want to try to finish my career strong and push to the end,” Dempsey mused. “Try to help the U.S. team qualify for the next World Cup and try to bring an MLS Cup to Seattle with the time I have left with the club. Hopefully that’s in the cards. We’re in a difficult situation this year and hopefully we can turn things around and get in the playoffs and make a push and if not this year, next year. We’ll see what tomorrow brings.”

Set to turn 35 by the time the 2018 FIFA World Cup rolls around, Dempsey’s current goal scoring form keeps the possibility alive that he could play a part in Russia. Either way, if it all ended tomorrow, the MNT forward says he’s at peace with everything he’s accomplished in his career.

Twellman backed up the sentiment.

“I have the utmost respect for Clint Dempsey because he’s literally maximized everything out of that body, that mind, that soul, that family and as athletes when it’s all said and done, you want to have no regrets. I can promise you one thing: Clint Dempsey will have zero regrets, and I respect the absolute hell out of him for that.”