John Brooks has come up through the youth system of Bundesliga club Hertha Berlin. After breaking into the first team as well as the U.S. National Team, the talented center back has his sights set on fulfilling his immense potential and is excited to see where it will lead him.
May 27 2015
The Journey: USMNT

There Are countless memories from a childhood spent in Berlin, but John Brooks recalls the foundation for his career with clarity and conviction. 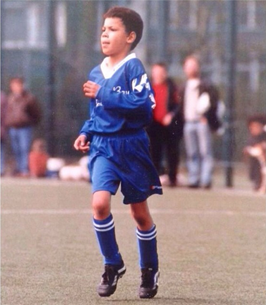 Brooks received an inquiry from his older brothers when he was just five years old. His brothers played soccer in the neighborhood surrounding the family home. One day, they asked him whether he wanted to join the game. As the U.S. Men’s National Team and Hertha Berlin defender now shares, he told them he’d give it a try.

“It was my two brothers and another guy,” Brooks told ussoccer.com recently outside his team’s training facility in Berlin. “He was a little bit older, but he still came down and played with us. It was just grass. We just played there. No goals, nothing. We just kicked the ball around and ran after it.”

From that day forward, Brooks played without fail. The game consumed him. He tucked a ball under his arm, found some free space and kicked it around wherever he went. He took a few extra minutes to return home when his mother called him inside for dinner. He soaked up the strict and vital lessons laid out by one of his first coaches and took them to heart.

Most importantly, Brooks allowed himself to step away from reality and dream about the future from time to time. When he did, he wondered whether he could one day rise to the pinnacle of the game in his hometown.

The bond between city, club and player strengthened over time. The little boy with the ball under his arm developed into a genuine prospect after he first joined a small Berlin club and eventually moved to the Hertha academy. He started as a striker and gradually worked his way back into the heart of defense as he proceeded through the ranks.

There were no guarantees as he climbed the ladder. There were only opportunities to distinguish himself from his peers and establish himself as a future professional. The magnitude of the chance struck Brooks as he reported to the club day after day.

“When I came in 2007 to Hertha, I saw everything,” Brooks said. “You didn’t have to wash your stuff at home. They wash it. They give you cleats. They give you everything here. Everything was about becoming a professional. I said now I have to go for it. Ever since you can kick the ball around and think about it, you wanted to be a professional. I was at the club and thought I would go for it.”

The first year didn’t exactly proceed according to plan. Brooks arrived from a smaller club where he played every game and served as the captain, but he spent most of his first year at Hertha on the bench. He sat and watched. The coach didn’t talk to him. He even thought about returning to the familiarity and the safety of his friends and the old club, but he stuck it out until the start of his second season. It proved a fateful decision that set him on the course he continues to follow today.

“The year after, we had a new coach,” Brooks said. “At first, he played the same XI from the last year. But then I don’t know what happened. Something switched in my head. I said, hey, you’re here, you wanted to be here, so you have to give 100 percent. I gave the first 100 percent. Since then, I’ve played every single game.”

Brooks isn’t quite sure where that mentality – the persistence required to grind through the adversity and show the steel necessary to succeed – originated, but he remembers how his father, John, shaped it.

Even through those difficult times when he didn’t feature as much as he wanted or didn’t play an integral role, Brooks muddled through with those underpinnings to guide him. Slowly but surely, the persistence paid off. He grew into his body. He learned the intricacies of the game. He tried to figure out how to make the next step and tap into the potential evident to those around him.

It is a process that continues to this day for the 23-year-old defender, even as Brooks takes his now familiar place in the Hertha starting XI. He cleared the initial hurdle when he established himself as a first-team contributor during the 2012-13 season. He meandered through the inevitable twists and turns encountered by most young professionals along the way. He shined and he struggled as he adjusted to the burdens of the Bundesliga and the expectations placed upon his sturdy shoulders.

“I’m not sure he knows what qualities he has, really,” Hertha midfielder Jens Hegeler explained. “I don’t know if he knows what potential is inside of him.”

As time marches onwards, Brooks reveals those traits consistently for club and country. His steady improvement – predicated on his focus to cut out errors and improve his consistency over the past couple of years – occasionally yields to a spectacular flourish. It is a tendency perhaps captured most neatly by his 45-minute appearance and his iconic goal against Ghana at the FIFA World Cup two years ago.

“That was the greatest moment so far,” Brooks said. “When I think about it, I still get the chills. The next thing I remember is that I told Julian [Green] and DeAndre [Yedlin] that I dreamed about it. Aron [Jóhannsson] said, “just believe it”, because he knew I dreamed about it.”

That goal offered a punctuation mark to Brooks’ ascendancy, but the past couple of years confirmed his overall development on both fronts.

Brooks batted away interest from other Bundesliga clubs and signed a new contract with Hertha in January. He also entrenched himself as a first-choice option for U.S. coach Jurgen Klinsmann, though he is ruled out for the upcoming World Cup qualifiers against St. Vincent and the Grenadines (Friday, 3:30p.m. ET, beIN SPORTS) and Trinidad and Tobago (Sept. 6, 8:00p.m. ET, FS1, Univision Networks) with a back injury.

The marked strides explain why Hertha Berlin general manager Michael Preetz projects him as a player capable of climbing even higher in the years ahead.

“For sure he is one of our best players,” Preetz said. “Of course, he has a lot of skills, which makes him one of our most popular players for the next few years, in my opinion. He is a central defender with good heading and good technical skills and, of course, with a good left foot. I think – and we all think in Berlin – that he will be prepared to be a part of one of the big clubs in the Premier League, for sure.”

Brooks hopes to push forward on the international level, too. He plans to build off his prominent role in the run to the Copa América Centenario semifinals this summer and use those lessons if the Americans secure their place in the Hexagonal with the desired results over the final two Group C matches.

“I felt that everyone was there for each other,” Brooks said. “That’s the main thing. Everybody helped each other. The back line did pretty good, but not only the back line, I think the whole team was great. “

Those sentiments fuel Brooks as he sets his objectives for a new Bundesliga season (“We want to start well like last season,” Brooks said. “I think the last season shows that our team is good and we can battle with other teams.”) and sustains his connection with Berlin for yet another year.

At this point, Brooks and Berlin are intertwined. He is a product of his hometown first and foremost, a representation of what it offers and what it provides. It is why he forges such a connection with Hertha and its supporters. It is why it remains his home for the immediate future.

There is no telling where the journey might lead in the years ahead, but there is also no doubt where it started and where it took flight. He is no longer the kid kicking the ball around on a spare patch of grass. He simply embodies that spirit now as he lives out those childhood dreams again and again with each passing day.