Veteran U.S. Goalkeeper Ready to Write the Next Chapter of His Inspiring Story
May 27 2015
The Journey: USMNT

Reflecting in the autumn of a career inevitably requires a glimpse at its outset. Tim Howard wasn’t quite Tim Howard back then. The formative moments in his career loomed half a career and half a world away.

Those first few steps for a Jersey kid at a Jersey club involved the inevitable fits and starts for a young goalkeeper over the course of five years, but they coalesced when one of the world’s largest clubs wanted to whisk him away to the Premier League.

Even at that critical point before the century of caps, the indelible place in the American soccer firmament and the decade of success at Everton, Howard grasped the magnitude of the challenge ahead at Manchester United. He always wanted to play in Europe. He always knew his preferred path wound through those famous English grounds and those magnificent European nights.

As a former Metrostars goalkeeper preparing to make the leap to Old Trafford, Howard appreciated the pioneers who made it possible. His talent and his potential earned him the move, but the success of other American goalkeepers smoothed the way for it.

“When I first came over, it was certainly helpful to me as a young goalkeeper who had no experience, who had no reputation, who didn’t have a name for himself to have great goalkeepers like Kasey Keller and Brad Friedel and Marcus Hahnemann,” Howard told ussoccer.com earlier this year. “It was basically those guys who allowed the club to take a chance on me because they knew American goalkeepers had what it takes.”

Howard suffered through the same trials and tribulations of his predecessors. He did not emerge as that steady, trusted figure overnight. He needed three halting, informative years at Manchester United to navigate through that adjustment period and wind his way to where he ultimately belonged.

It took a loan spell at Goodison Park for Howard to find permanent footing in England and locate the right situation for the achievements to follow.

“When I got here, the second I walked through the door, I knew I wanted to be a part of this club, part of the fabric,” Howard said. “I wanted to be considered – at some point before I left – an Evertonian because this is where my heart is.” 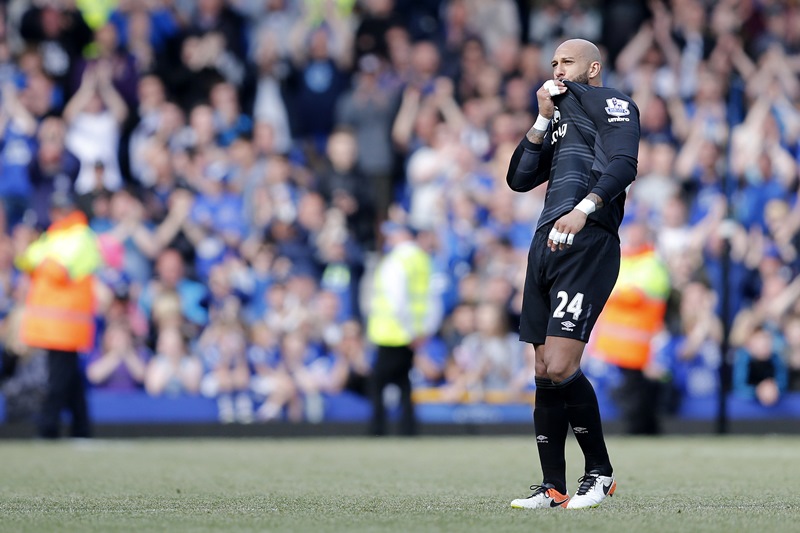 Howard became a fan favorite at Everton Football Club where he spent the longest stretch of his professional club career.

More than anything, that heart showed every time Howard stepped between the sticks. He followed in the steady footsteps of Friedel – another American with a penchant for featuring every week and producing all of the necessary saves at the right time – and solidified himself in the team more and more with each passing year.

Every stride reinforced the last. The accolades accumulated. The international honors piled up. The roles strengthened on the field and in the locker room. And Howard emerged as an influential figure with the sort of staying power often elusive at that lofty level.

“He’s fantastic,” Everton captain Phil Jagielka said. “He’s great to have behind you. His ability as a goalkeeper over the last nine years that I’ve played with him has been amazing. The standards he’s set for himself, and to keep those standards for such a long time, it’s going to be a massive miss when he goes over to the States.”

Slowly and surely, Howard wove himself into the fabric for both club and country. The successes coincided: a pair of World Cups as the number one – and one magnificent night against Belgium – and more than 100 caps for the U.S. Men’s National Team on one hand, a protracted run of 210 consecutive starts and a century of clean sheets for Everton on the other.

This symbiotic relationship between Howard, Everton and the United States continued more or less until its conclusion. There were diversions along the way, the inevitable stopping off points from time to time. Those modest hiccups never undermined the strength of that relationship. It merely underscored the benefits of it for everyone involved until its natural stopping point arrived at the end of this Premier League season.

“Coming to work every day at this club and making it my home, I dreamed about playing for a club that I could be a part of, a club that meant something to me,” Howard said. “For that club to be Everton, 10 years later, that’s all I wanted to do and all I wanted to accomplish.”

With everything more or less in place, Howard called time on his Everton career and set his course back to MLS. His future, indeterminate as it is, includes a place in the National Team for the Copa America Centenario and a new challenge ahead with Colorado Rapids upon its conclusion.

It is another act, not the conclusion to a glittering career. Howard, 37, still has years left in his career. Keller and Friedel both played into their 40s. Howard is situated to follow that same path if he so chooses.

“It’s nice that MLS will get a great goalkeeper who still has got a lot to give,” Jagielka said. “As much as he’s getting on a little bit, he’s got plenty of years left in him with the way he trains and the way he performs day-in and day-out. It’s going to be an exciting time for MLS and an exciting time for us to watch him over there.”

At this stage, there is nothing left for Howard to prove. He is no longer the burgeoning prospect whisked away to Manchester. He is an accomplished goalkeeper with a plethora of honors and several memorable performances to his name. His legacy is secure on both sides of the pond.

Perhaps most importantly, Howard protected and enhanced the reputation for American goalkeepers established before his arrival. Fellow U.S. goalkeepers Brad Guzan (Aston Villa) and Ethan Horvath (Molde) benefit from that tradition and strive to uphold it as they continue to ply their trade overseas. 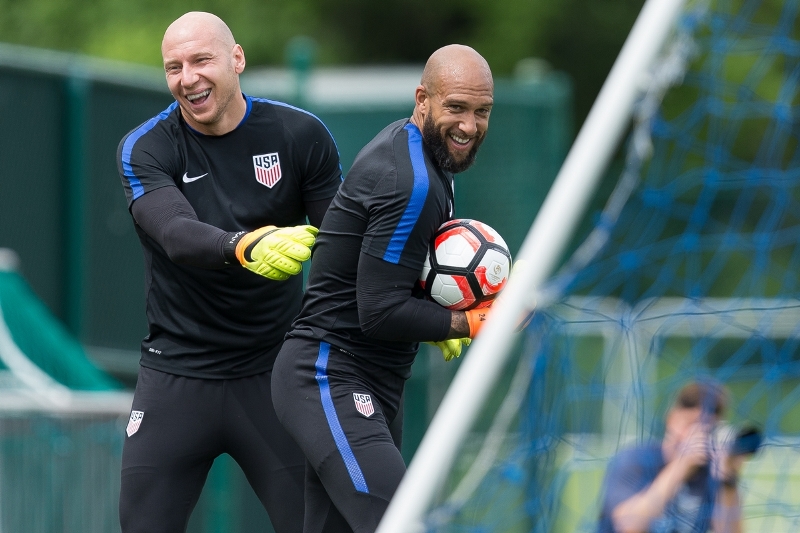 Howard (right) and Guzan head a formidable depth chart at the goalkeeper position for the U.S. Men's National Team.

“The more I got to know Tim and work with him, I got to see his path and his journey,” Guzan said. “He left Man United to go to Everton and be so successful there. It created a hunger inside of me. That’s something I wanted. He set the bar so high week-in, week-out for so long. You just want to continue the trend that he set.”

Those sentiments offer perhaps the finest measure at this stage in Howard’s career. He is not done yet. Not by a long shot. But there is enough information in hand to place everything in context and focus. The process starts in Jersey. And it ends with that reputation and that tradition firmly in place.