The U.S. Men's National Team will try to get back to its winning ways when it hosts one of its most formidable foes, Costa Rica, in a FIFA World Cup qualifier at Lower.com Field in Columbus, Ohio on Wednesday at 7 p.m. ET (ESPN2, UniMas and TUDN).

The USA (2-1-2, 8 points) suffered its first loss during 2022 FIFA World Cup Qualifying in a 1-0 defeat at Panama on Sunday night, while the fifth-place Costa Ricans (1-1-3, 4) recorded their first win of the Concacaf Octagonal in a 2-1 home victory against El Salvador.

For a country of five million people, Costa Rica has enjoyed remarkable success when it comes to the FIFA World Cup.

In eight qualifying runs since 1990, the Los Ticos  have reached the final tournament on five occasions and four times in their last five attempts.

Debuting at Italia ’90, they became the first Concacaf team to book a spot in the knockout round of a World Cup played in Europe under head coach Bora Milutinovic, who later directed the Americans at USA 1994.

Costa Rica also qualified for the 2002, 2006, 2014 and 2018 competitions. The Ticos finished an impressive eighth at Brazil 2014, with a 2-0-3 mark. They won Group D, which included Uruguay, Italy and England, with a 2-0-1 record. They survived a shootout to defeat Greece in the Round of 16 before losing in another shootout to the Netherlands in the quarterfinals. 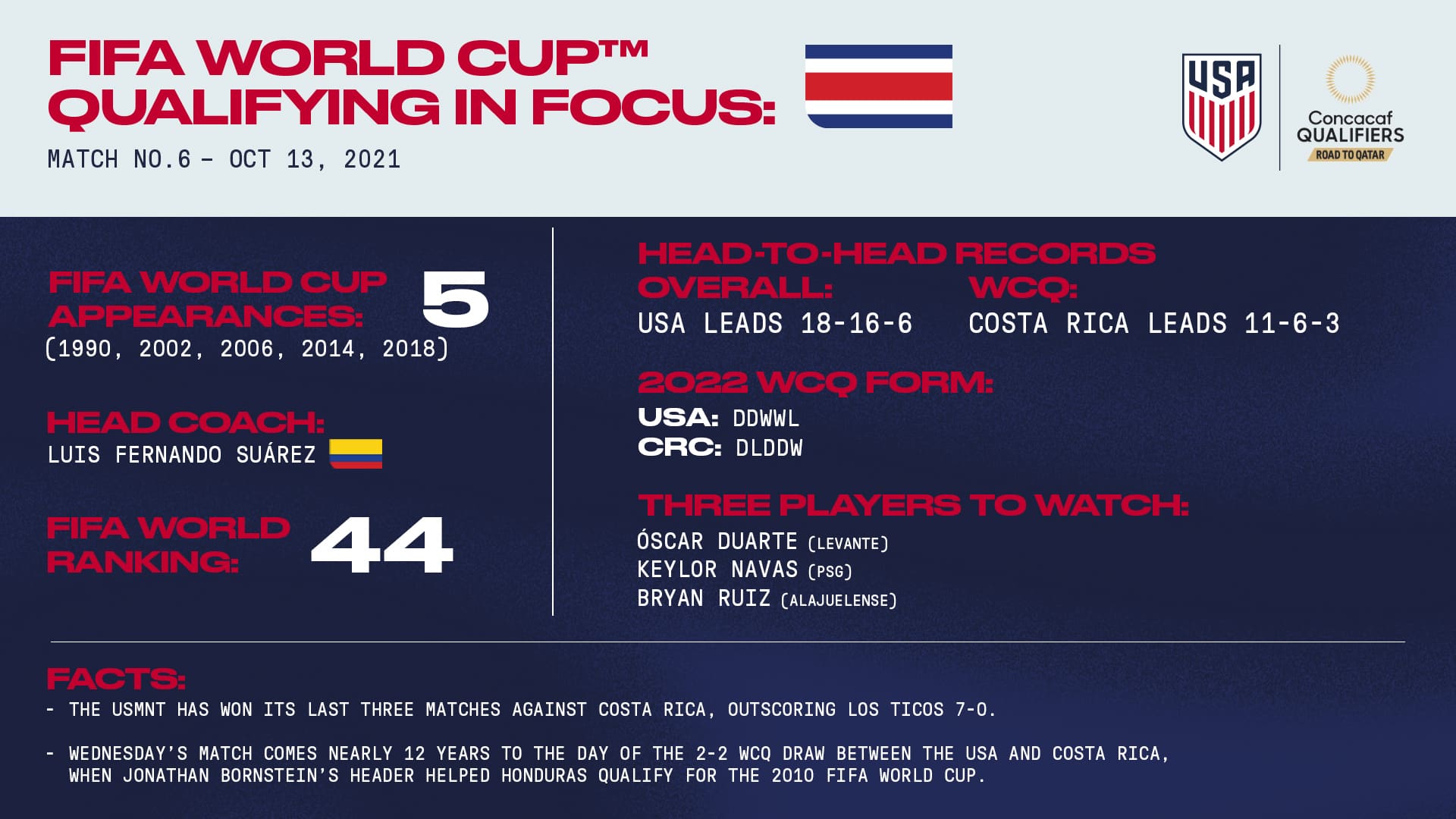 The Ticos have been a major thorn to the U.S., twice helping to deny the Americans an opportunity to reach the World Cup with wins on U.S. soil. Costa Rica recorded a 1-0 win in Torrance, Calif. in 1985 and a 2-0 victory at Red Bull Arena in Harrison, N.J. in 2017.

Still, the USMNT owns a 6-2-1 home qualifying record against the Costa Ricans.

In the second encounter in the USA, Tab Ramos scored in the second half and goalkeeper Dave Vanole made a huge save on a Mauricio Montero penalty kick to preserve a 1-0 win in St. Louis on April 30, 1989.

Ramos continued his heroics vs. the Central Americans in Portland, Ore. on Sept. 7, 1997. In his second international match since recuperating from a knee injury, Ramos connected late in the match as the U.S. secured a 1-0 win.

Though the Americans had qualified for the 2010 FIFA World Cup with a win in Honduras four days prior, they never gave up as Jonathan Bornstein's goal in the fifth minute second-half stoppage time eliminated Los Ticos from contention from the tournament in Washington, D.C. on Oct. 14, 2009.

In arguably the most difficult home conditions in which the USMNT has played, the hosts survived a snowstorm and Costa Rica en route to a 1-0 triumph which was dubbed the SnowClasico at Dick's Sporting Goods Park in Commerce City, Colo. on March 22, 2013. Clint Dempsey struck for the lone goal.

After reaching the Concacaf Gold Cup quarterfinals, Costa Rica has struggled to find the net during qualifying.

They have tallied three goals in five games for a 1-1-3 mark. Los Ticos started with a scoreless draw at Panama on Sept. 2, following that with a 1-0 home defeat to Mexico on Sept. 5. They played Jamaica to a 1-1 tie at home on Sept. 8 - Jimmy Marín scored - before securing another scoreless draw at Honduras on Oct. 7.

In their most recent match on Oct. 10, the Central Americans rallied from a halftime deficit to record a 2-1 home triumph over El Salvador. They struck twice within a six-minute span as captain Bryan Ruiz connected in the 52nd minute and Celso Borges converted a penalty kick in the 58th minute for the game-winner.

Luis Fernando Suárez was named head coach on June 22 after Ronald Gonzalez was fired following Costa Rica’s' 4-0 loss to the USMNT in the Concacaf Nations League.

The 61-year-old Colombian has a wealth of coaching experience, having directed club and national teams the past 22 years.

He has a history of coaching teams into the FIFA World Cup, leading Ecuador to the 2006 competition in Germany and Honduras to South Africa 2010.

Suarez also coached at Atletico Nacional, Deportivo Cali in Colombia, among other assignments. He was managing Atletico Bucaramanga when he got the call to take over the Costa Rican reigns.

A defender, Suarez played at only two clubs during a 16-year career at Atletico Nacional and Deportivo Pereira.

Los Ticos will bring a much more veteran side to Columbus with 12 players over 30. Three players are in the century cap club - midfielders Celso Borges (143), Bryan Ruiz (136), the team captain, and forward Alvaro Saborio (111).

Ruiz, 36, who has represented Costa Rica at the 2014 and 2018 FIFA World Cups, is close to completing a legendary career. He has played for Gent (Belgium), Twente (the Netherlands), Fulham (England), Santos (Brazil) and currently with Alajuelense, with whom he started his pro career in 2003. Ruiz leads the national side with 28 goals, followed by Borges (26) and Joel Campbell (21).