Five Things to Know About Jamaica, presented by BioSteel

The United States will play its eighth and final qualifier of the year for the 2022 FIFA World Cup when it visits Jamaica at Independence Park in Kingston, Jamaica on Tuesday, Nov. 16 at 5 p.m. ET (Paramount+, Universo).

This will be the fourth time the teams will meet this year, which ties the record for the most times the USMNT has faced one opponent in a calendar year. The U.S. faced Poland four times in 1973 and Honduras four times in 2009.

In a friendly on March 25 in Wiener Neustadt, Austria, Sebastian Lletget had a brace and Sergiño Dest and Brenden Aaronson added single goals as the USMNT recorded a 4-1 win. In the Concacaf Gold Cup quarterfinals, Matthew Hoppe tallied his first international goal in the 83rd minute leading the USA to a 1-0 shutout on July 25 en route to the tournament title. And on Oct. 7 in Austin, Texas, the Americans recorded a 2-0 triumph in a FIFA World Cup qualifier as Ricardo Pepi scored twice within a 13-minute span in the second half.

Here are five things to know about the Reggae Boyz:

Since first entering qualifying competition in 1966, the Reggae Boyz have reached the FIFA World Cup once in 11 attempts. Their shining moment in the sun came when they booked a spot at the 1998 event in France with a legendary and talented side that included the likes of current head coach Theodore Whitmore, Deon Burton, Robbie Earle, Warren Barrett and Linval Dixon. The Jamaican squad played in a team-record 20 matches during that qualifying run, registering a 3-2-5 record in the Hexagonal and an 11-3-6 overall mark. Whitmore led all Jamaican scorers with five goals.

In France, they finished third in Group H with a 1-2-0 mark. The team started with a 3-1 defeat to eventual third-place finisher Croatia, with Earle scoring the lone goal. The Reggae Boyz’ 5-0 loss to Argentina in the second match meant they wouldn’t advance from the group, but they rebounded to end the tournament as Whitmore’s brace carried them to a 2-1 victory against Japan – their first win at the FIFA World Cup.

Since 1998, Jamaica has advanced to the final round of Concacaf World Cup Qualifying on four of seven occasions. They returned this year after missing out during the 2018 qualification process.

The teams first met in a scoreless draw in Kingston, Jamaica on July 21, 1988 before the U.S. eliminated its rivals from contention for the 1990 FIFA World Cup in Italy with a 5-1 triumph in St. Louis on Aug. 13, 1988. Frank Klopas struck for a pair of second-half goals as Brian Bliss, Hugo Perez (go-ahead goal on a penalty kick) and Paul Krumpe added one each. Alton Sterling had Jamaica's lone goal.

The USMNT owns a 6-1-6 qualifying record against the Reggae Boyz, including an unbeaten 5-0-2 mark on home soil. In those seven matches, the USA has outscored Jamaica, 14-4, while earning two clean sheets.
Since that 1988 encounter, only one other contest between the teams has been decided by more than a goal -- a 2-0 win in Kansas City, Kan. on Oct. 11, 2013. Jozy Altidore and substitute Graham Zusi found the net and Tim Howard secured the clean sheet for the already qualified USMNT side. The other match was the USA’s 2-0 win in Austin, Texas on Oct. 7. Jamaica has proven tough to beat at Independence Park, better known on the island as ”The Office”. The USMNT has found it difficult to win and score goals in Kingston as it has recorded a 1-1-4 mark there. Only four goals have been scored in those six matches, four by each squad.


The Americans broke their 359-minute scoreless drought at The Office in dramatic fashion on Aug. 18, 2004, thanks to substitute Brian Ching's dramatic equalizer goal in the 89th minute for a 1-1 draw. They dropped a 2-1 result on Sept. 7, 2012. Clint Dempsey found the net only 36 seconds after the opening kickoff, but the Reggae Boyz rallied behind a pair of free kicks. Rodolph Austin equalized from 28 yards in the 24th minute before Luke Shelton added a 25-yard effort in the 62nd minute.

On June 7, 2013, the USMNT secured its lone win behind a 2-1 result. Jozy Altidore gave the visitors the lead on the half hour. After Jermaine Beckford knotted it up in the 89th minute, Brad Evans snapped a 1-1 deadlock with a dramatic finish in second-half stoppage time.

One of the most heralded players in Jamaican football history, Theodore Whitmore recorded 120 caps and 24 goals for the Reggae Boyz, good enough for third all-time in both categories. Interestingly, “Tappa” made his international debut for Jamaica in a 1-0 friendly defeat to the United States on Nov. 7, 1993 in Fullerton, Calif. 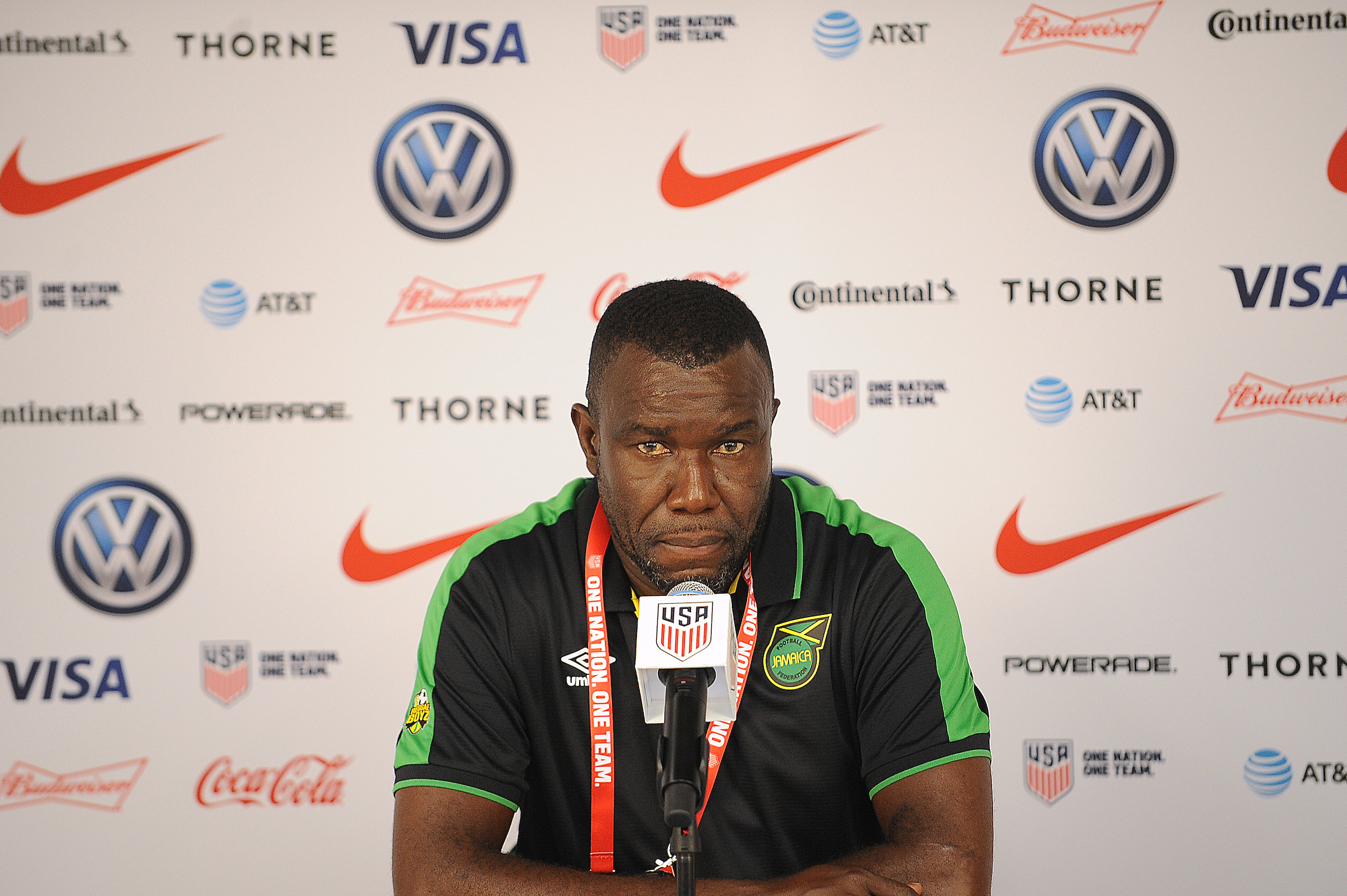 A key member of the 1998 FIFA World Cup squad, the midfielder also played part of his career in England with Hull City and Tranmere Rovers, as well as a short stint with Scottish club Livingston.
Having previously coached Jamaica from 2009-2013, Whitmore returned to the post in 2016 and was at the helm as the Reggae Boyz advanced to the 2017 Concacaf Gold Cup Final where they fell 2-1 to the United States.

Jamaica got off to a rough start in the September window, conceding the first goal in each match. They dropped a 2-1 decision to Mexico in a closed-door match on Sept. 2, lost to Panama at home on Sept. 5, 3-0, and rebounded with a 1-1 draw at Costa Rica on Sept. 8.

The October window was kinder to the Reggae Boyz, as they earned four points on the strength of a 1-1-1 record. They opened up with a 2-0 defeat against the USA in Austin, Texas on Oct. 7, as Ricardo Pepi scored within a 13-minute span in the second half (49th and 62nd minutes). 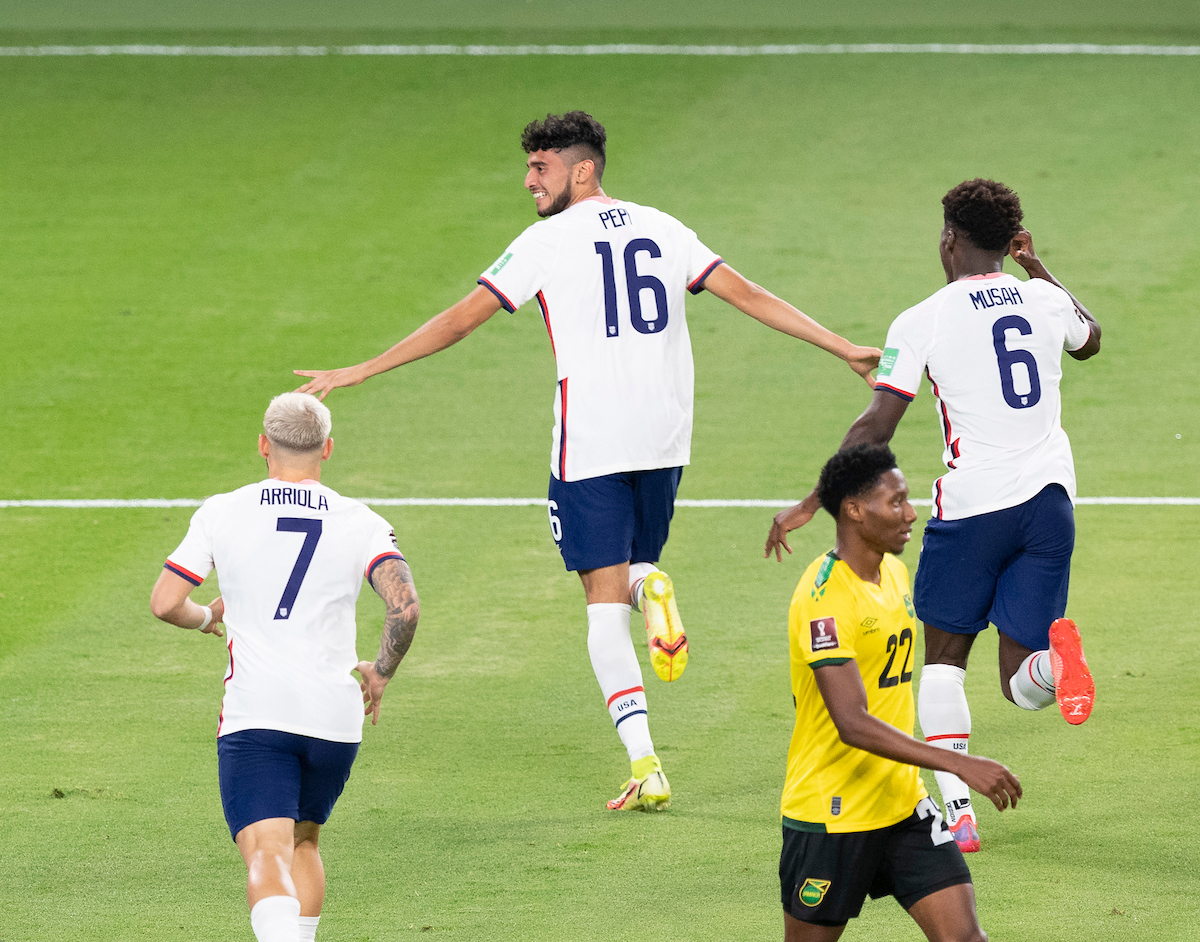 After a scoreless home draw with Canada on Oct. 10, Jamaica enjoyed its best result of qualifying as it registered a 2-0 triumph at Honduras. Forward Kemar Roofe (38th minute), in his fourth appearance for Jamaica, and Oniel Fisher (79th minute) found the range with their first international goals. Goalkeeper Andre Blake secured clean sheets vs. Canada and Honduras.

On Friday, Whitmore’s side drew 1-1 at El Salvador and almost escaped with a win. Michail Antonio had given the Reggae Boyz an 82nd-minute lead with his first international goal, but Alexand Roldan, the brother of U.S. international Cristian Roldan, spoiled the visitors' bid for three points with a 90th-minute strike.