Five Things to Know About Mexico

It wouldn't be a true FIFA World Cup Qualifier for the United States hosting Mexico, unless the match was held in Ohio.

For the sixth consecutive qualifying cycle, the teams will tussle in the Buckeye State, this time at TQL Stadium in Cincinnati on Friday, Nov. 12 at 9 p.m. ET (ESPN2, Univision, TUDN).

The U.S. Men's National Team will be gunning for its third consecutive win over its neighbors to the south. During a 56-day span this summer, the Americans secured a 3-2 extra time win in the Concacaf Nations League Final on Christian Pulisic's 114th-minute penalty kick on June 6 in Denver and then a 1-0 triumph in the Concacaf Gold Cup Final on Miles Robinson's 118th-minute goal in Las Vegas on Aug. 1.

Here are five things to know about El Trí:

Historically, Mexico has been one of the strongest teams in the region, qualifying for the past seven FIFA World Cups and 16 overall.

El Trí participated in the first World Cup in Uruguay in 1930, in which there was no qualifying. The finished 13th and last with a 0-3-0 record.

After losing to the USA in a one-game qualifier in Rome, 4-2, only days prior to the kickoff of the 1934 FIFA World Cup, Mexico started a run of reaching six consecutive FIFA World Cups in 1950. The host side finished unbeaten (3-0-0) against Cuba and the USA during a qualifying tourney in 1949.

Since then, Mexico has failed to reach the FIFA World Cup only three times, missing out in 1974 and 1982 and being banned from the 1990 competition. It has hosted the tournament twice - in 1970 and 1986 - as it was eliminated in the quarterfinals both times.

The first time these two rivals met, the USMNT prevailed in a one-match, winner-takes-all qualifier in Rome, Italy only days prior to the start of the 1934 World Cup. Aldo “Buff” Donelli scored four times for the USA en route to a 4-2 win. In the first qualifying tournament for Brazil 1950, Mexico won both games in Mexico City, 6-0 and 6-2. That started a 31-year run in Mexico WCQ dominance over the USA in which their rivals to the south forged a 12-0-3 record.

The string was broken in 1980, when the USA earned a 2-1 win in Fort Lauderdale, Fla. Including that result, the Americans have more than held their own at home against El Trí since, registering an impressive 5-1-1 mark. 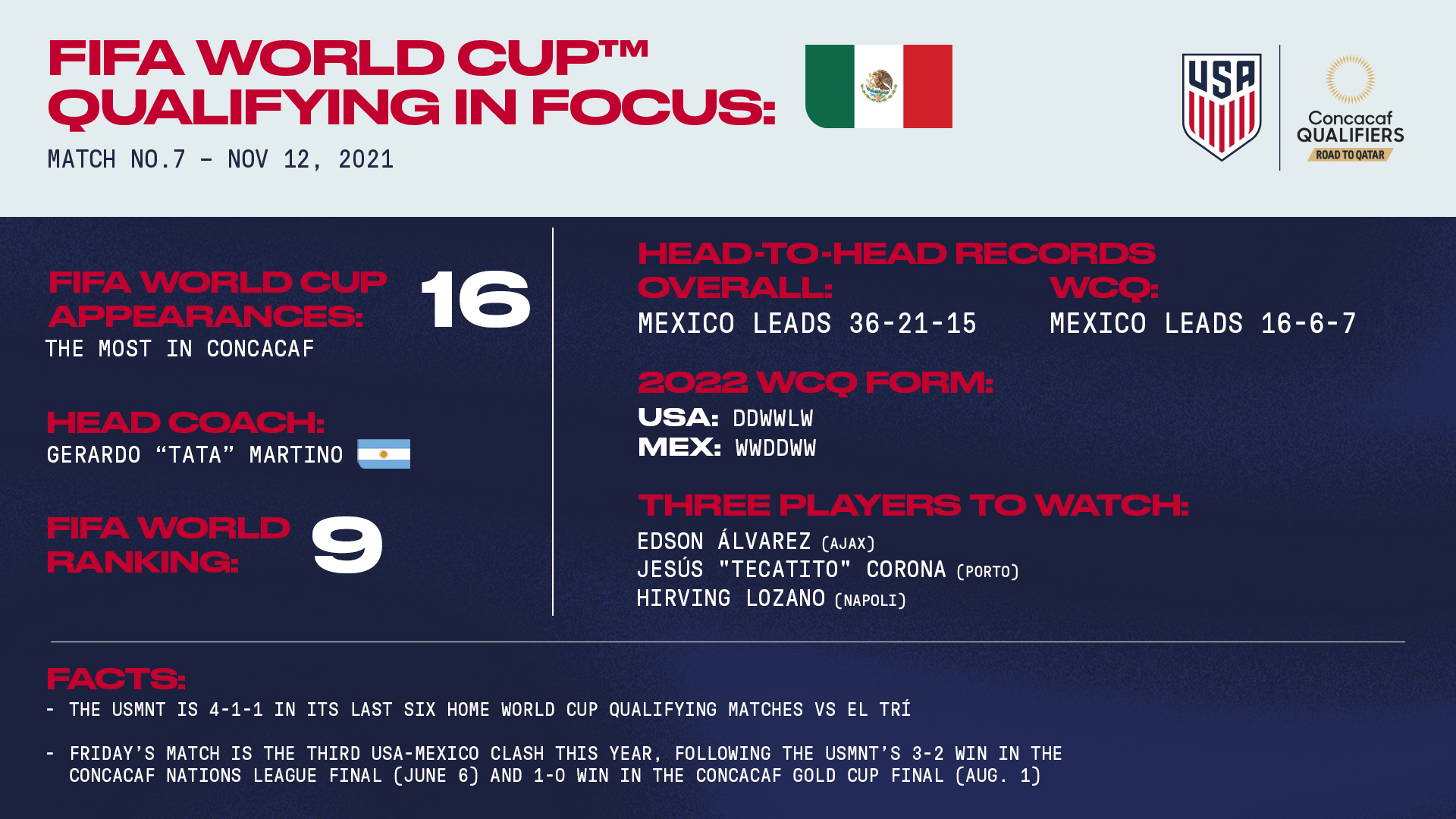 The six-game unbeaten run continued with a wild 2-2 draw in Foxborough, Mass. on April 20, 1997. Then came four of the most memorable triumphs in USMNT history – “Dos a Cero” results - at Historic Crew Stadium in Columbus.

In 2001, the USMNT’s string of 2-0 results began as Josh Wolf scored a goal and set up Earnie Stewart's tally. Four years later, they duplicated that feat as Steve Ralston and DaMarcus Beasley celebrated goals. In 2009, Michael Bradley, the son of then U.S. head coach Bob Bradley, bagged a brace. In 2013, Landon Donovan got into the act, scoring once and assisting on Eddie Johnson's goal.

The streak was broken in 2016, when Rafa Marquez tallied in the 89th minute to give the visitors a 2-1 win.

Mexico got off on the right foot in qualifying, downing Jamaica, 2-1, at Estadio Azteca on Sept. 2, as Alexis Vega and Henry Martin scored. On Sept. 5, they secured a 1-0 win at Costa Rica on Sept. 5 on Orbelín Pineda's penalty kick. Three days later at Panama, Jesus Corona's 76th-minute goal helped the team earn a 1-1 draw.

During the most recent window, Canada impressively held Mexico to a 1-1 draw at Azteca, with Jorge Sanchez scoring, on Oct. 7. Three days later, they recorded a 3-0 triumph vs. Honduras as Francisco Cordova, Rogelio Funes Mori and Hirving Lozano found the net. On Oct. 13, Hector Moreno and Raul Jimenez tallied in a 2-0 victory at El Salvador.

In its most recent encounter, El Trí dropped a 3-2 friendly decision to Ecuador in Charlotte, N.C. on Oct. 27, as Roberto Alvarado and Osvaldo Rodríguez scored.

After Friday's contest, Mexico will play at Canada in its eighth 2022 WCQ in Edmonton on Nov. 16.

Martino, 58, has been largely successful throughout his coaching career which includes stops at the helm of the Paraguay and Argentina national teams on the international stage as well as Newell’s Old Boys in his native Argentina and Barcelona at the club level. Martino has guided his teams to second place finishes in many of the sport’s most prestigious competitions, including the Copa Libertadores and La Liga at club level and the Copa America and World Cup on the international stage.

Not surprisingly, Martino selected a veteran squad for his next two matches. Eleven players are over 30-years-old.

Guardado, 35, the team captain, is the most capped player (170), followed by goalkeeper Guillermo Ochoa, 36, with 120 international appearances, and Hector Moreno, 33, with 119 matches.

Of the 26 players, Guardado and Jimenez lead with 28 international goals apiece.

No Mexican player has scored more than one goal in the team's first six qualifiers.