In Thursday night's opening night of Concacaf final round of qualifying, both teams registered draws. The USA recorded a scoreless draw at El Salvador while Canada played Honduras to a 1-1 tie at home.

This will be the 37th meeting between the rivals.

In 1985, the Canadian National Team qualified for its first and only World Cup, finishing atop the final qualifying round unbeaten at 2-0-2. They did not fare well in the 1986 World Cup in Mexico, losing their three matches to eventual semifinalist France, 1-0, Hungary, 2-0, and the Soviet Union, 2-0.

The Canadians qualified for the Concacaf Octagonal by blanking Haiti twice. Cyle Larin scored in each win, a 1-0 victory on June 12 and a 3-0 triumph on June 15. Canada added a Junior Hoilett tally and an own goal.

It is a different story on American soil as the USA is unbeaten in its last five matches against Canada, compiling an overall 3-1-2 mark.

The USA won the last two qualifiers between the sides by 3-0 scores. That included a victory in Palo Alto, Calif. on March 6, 1997, as Eric Wynalda, Eddie Pope and Earnie Stewart scored, and in Vancouver, Canada as Roy Wegerle (twice) and Claudio Reyna found the net on Nov. 9, 1997. 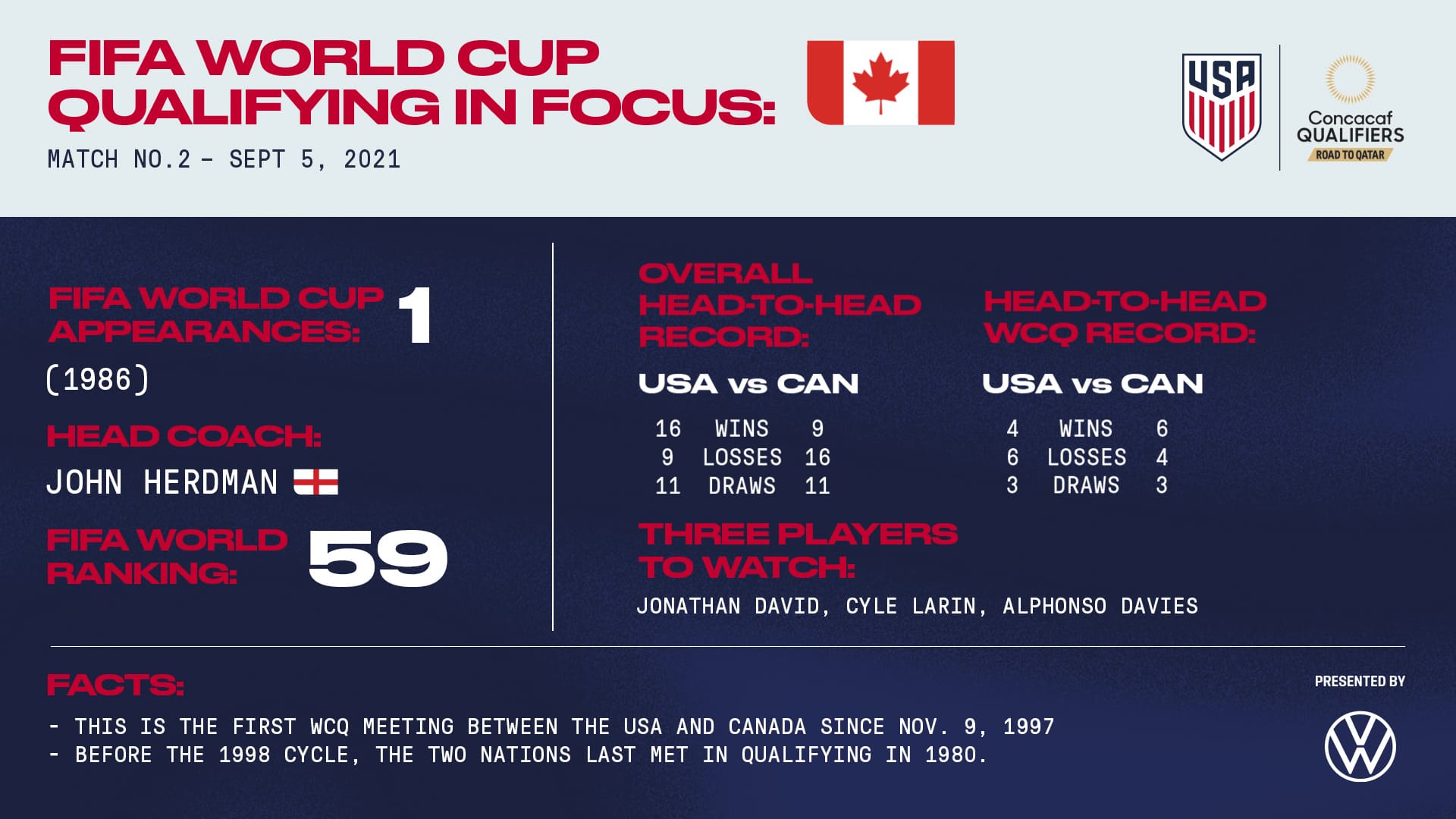 John Herdman is a rare breed, having coached both the Canadian men's and women's national teams to success. After directing the New Zealand Women's National Team from 2006-2011, the 45-year-old Englishman was named Canada women's head coach. He guided Les Rouges to the gold medal at the 2011 Pan American Games in Mexico and then back-to-back bronze medals at the 2012 and 2016 Olympics.

In 2018, in an unprecedented move for Canada, Herdman took over the reins of the men's team. Under his direction, Canada has improved and is playing some of its best soccer in years while recording a 21-6-0 mark.

The Canadians had an eight-game winning streak that started March 25 during World Cup Qualifying before losing to the USA in its final Gold Cup Group B match. During that stretch, they outscored their opposition 39-3, at one point recording five consecutive clean sheets. They qualified for the Concacaf final round by blanking Haiti twice. Larin scored in each win, a 1-0 victory on June 12 and a 4-0 triumph on June 15. Canada added a Junior Hoilett tally and an own goal.

Canada went 2-1-0 in the Gold Cup group stage, opening with a 4-1 triumph over Martinique. Larin, Jonathan Osorio, Stephen Eustáquio and Theo Corbeanu did the damage. In a 4-1 win over Haiti, Larin recorded a brace after Eustáquio put his name on the scoresheet. Hoilett closed out the scoring. 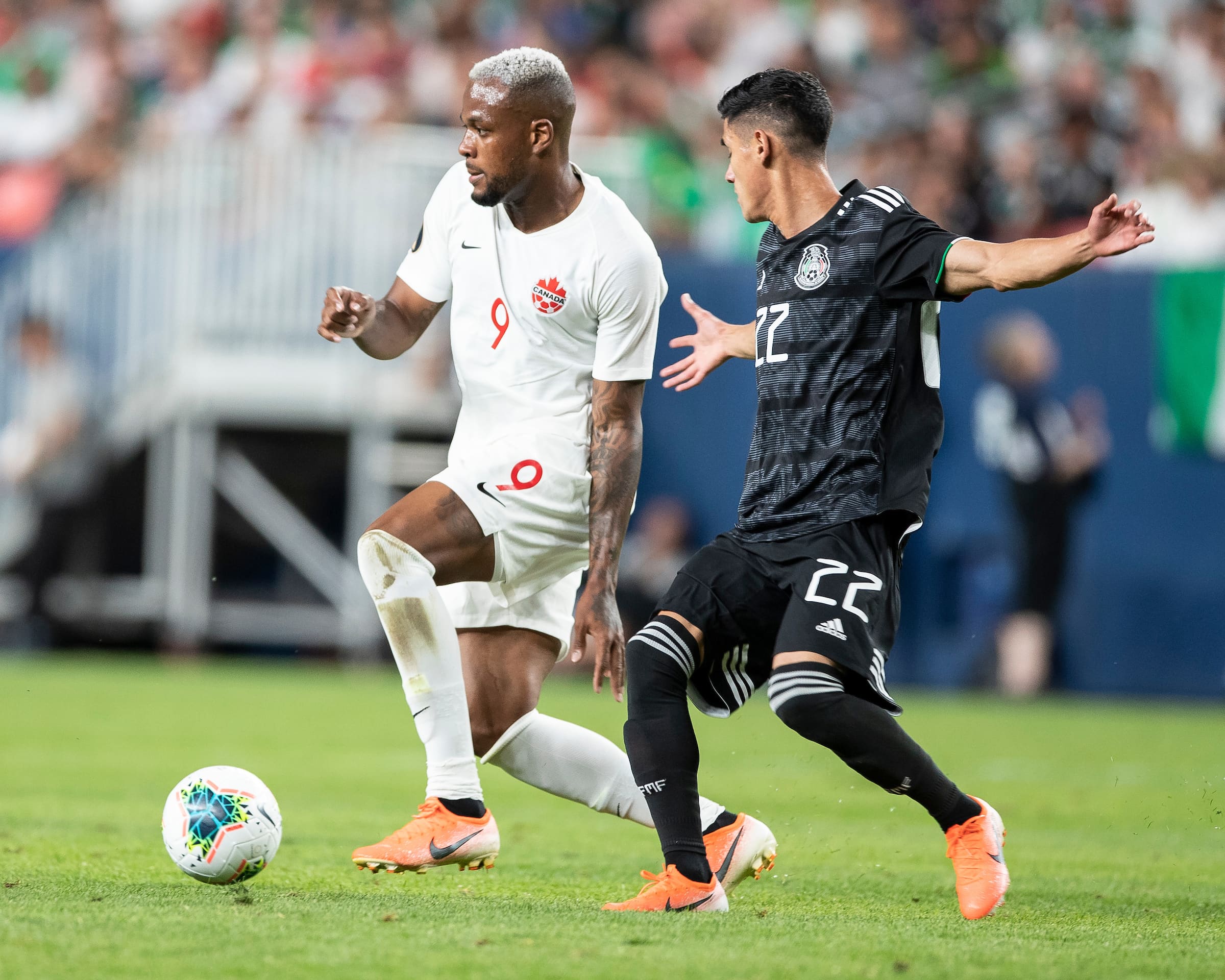 In the most recent encounter between the sides, the U.S. edged Canada, 1-0, on Shaq Moore's goal in the opening minute as the Concacaf Gold Cup Group B winner was decided in the final match.

After losing to the USA, the Canadians rebounded with a 2-0 quarterfinal win over Costa Rica as Eustáquio and Hoilett scored. In the semifinals, Mexico prevailed with a 2-1 win as Tajon Buchanan tallied Canada’s lone goal.

Canada traded penalty kicks in its draw with Honduras at BMO Field in Toronto on Thursday night. Alex Lopez tallied for the visitors in the 40th minute and Cyle Larin equalized in the 66th minute.

This is considered a golden generation for Canada, which has reached the Concacaf WCQ final round for the first time since 1998 qualifying. Players compete in 10 countries, including England, France, Germany, Portugal, Serbia, South Korea, Scotland, Turkey, the USA and Canada.

Two players who did not participate in the Gold Cup are on the roster and are expected to be difference makers. 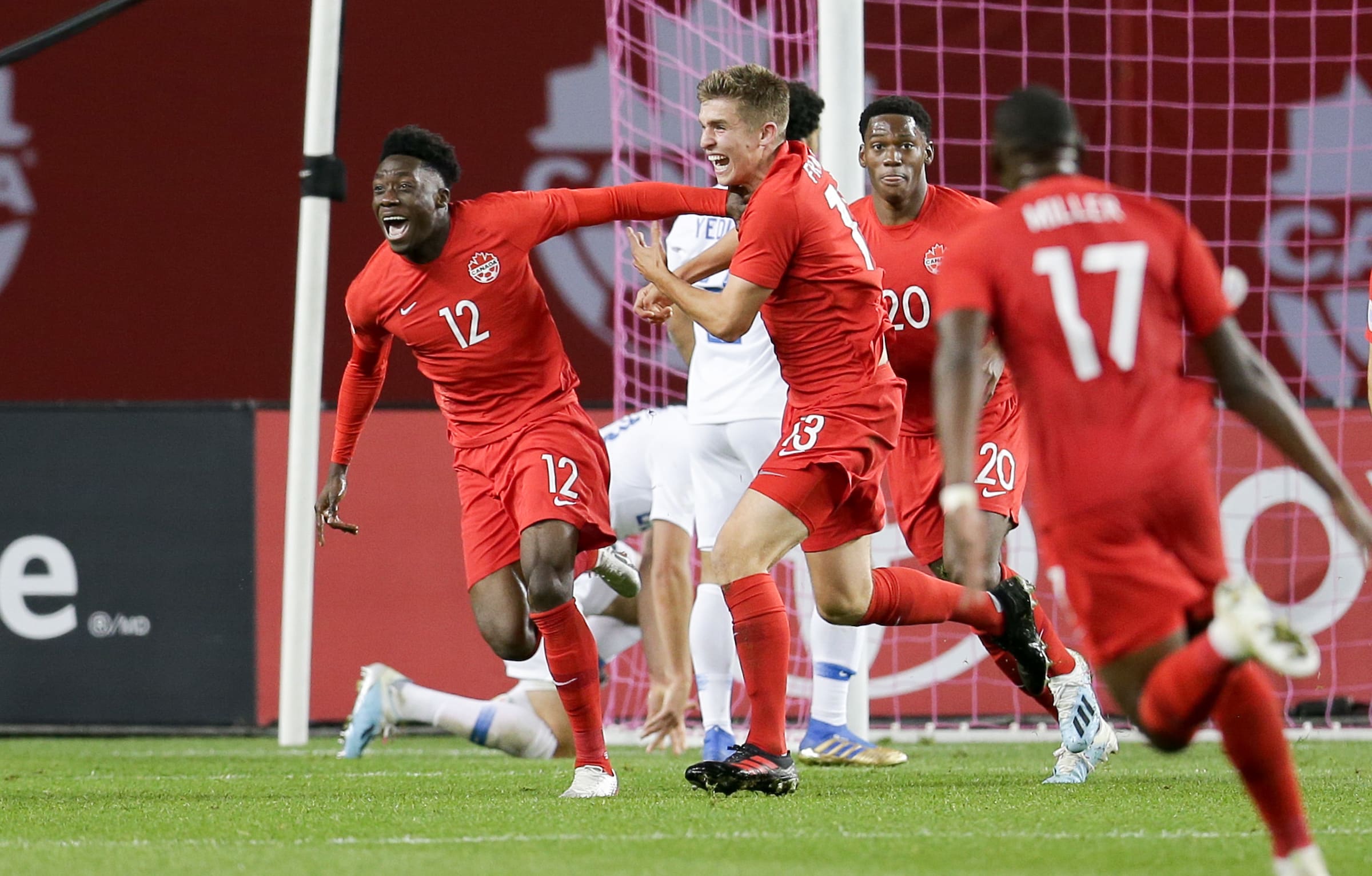 Alphonso Davies, 20, whose vision has secured Canada's backline, is a force and played the full 90 vs. Honduras on Thursday night. After injuring his ankle during training prior to the Gold Cup, the 2020 Canada Soccer Player of the Year returned to Germany to prepare for the new season with Bundesliga champion Bayern Munich.

Forward Jonathan David, who has scored 15 times in 17 international matches, was given the competition off as he prepared for another campaign with French Ligue 1 champions Lille.

American and Major League Soccer fans should be quite familiar with two players.

Former Orlando City SC standout forward Cyle Larin, 26, who struck for 19 goals in 38 matches for Beşiktaş (Turkey) in 2020-21, has been vital to the attack. He has netted a team-high 11 goals in 2021 and finished tied for second in the Gold Cup (three goals). Larin, who converted the equalizing penalty vs. Honduras, has 19 goals in 41 international matches, tying him with Dale Mitchell for second among Canada's all-time scoring leaders.

Midfielder Tajon Buchanan, 22, has emerged as an important piece of the puzzle for the New England Revolution and the national team. Named the Gold Cup's Young Player of the tournament, Buchanan was transferred by New England to Club Brugge (Belgium) on Aug. 24 and will join the team after the MLS season. Buchanan, who has recorded six goals and four assists for the Revs, was named the Canadian men’s player of the month for August.

Midfielder Stephen Eustáquio, who plays for F.C. Paços de Ferreira (Portugal), missed the clash with the USMNT in the Gold Cup with a yellow-card suspension. He played the entire way vs. Honduras.

Red Star Belgrade goalkeeper Milan Borjan, 33, did not play in the Gold Cup after backstopping five WCQs, returned to the net Thursday night. He has 54 caps.