The U.S. Men's National Team can take another step toward booking a spot in the FIFA World Cup when it hosts Panama at Exploria Stadium in Orlando, Fla. on Sunday, March 27 at 7 p.m. ET (FS1, UniMás, TUDN).

The USMNT (6-2-4, 22 points) are in second place in the Concacaf Octagonal after earning a valuable point in a scoreless draw at Mexico on Thursday night. It was the third consecutive WCQ at Estadio Azteca in which the USA earned a result.

A USA win combined with a Costa Rica draw or loss at El Salvador would see the USMNT book its ticket to the 2022 FIFA World Cup. Just a U.S. win would ensure the team at least a fourth-place finish in the Concacaf Octagonal. The top three teams qualify while the fourth-place team will meet the Oceania winner in a playoff for a spot in Qatar this November.

Fifth-place Panama (5-4-3, 19) needs a win to remain in contention for a spot. The Central American side is coming off a 1-1 home draw with Honduras on Thursday night.

Panama did not begin qualifying until the 1978 competition. The Central Americans fell short 10 consecutive times until they booked a spot in the 2018 FIFA World Cup in Russia by finishing third in the Hexagonal behind Mexico and Costa Rica with a 3-3-4 record.

The Panamanians' final qualifier, a 2-1 win against Costa Rica, was a dramatic and controversial encounter, a result that left the United States on the outside of a World Cup for the first time since 1986. Panama were awarded a goal off the head of Gabriel Torres in the 53rd minute that never crossed the goal line. Roman Torres then found the range in the 88th minute that snapped a 1-1 deadlock.

The Central American side finished 32nd and last in Russia, failing to win a game, scoring twice and conceding 11 times.

In its opener, Panama dropped a 3-0 result to eventual Group G champion Belgium. That was followed by a 6-1 loss to England, the only highlighted credited to Felipe Baloy who tallied Los Canaleros' first World Cup goal. Panama netted the opening goal by Giovane Élber in the 31st minute before Tunisia prevailed behind a pair of second-half tallies, 2-1. 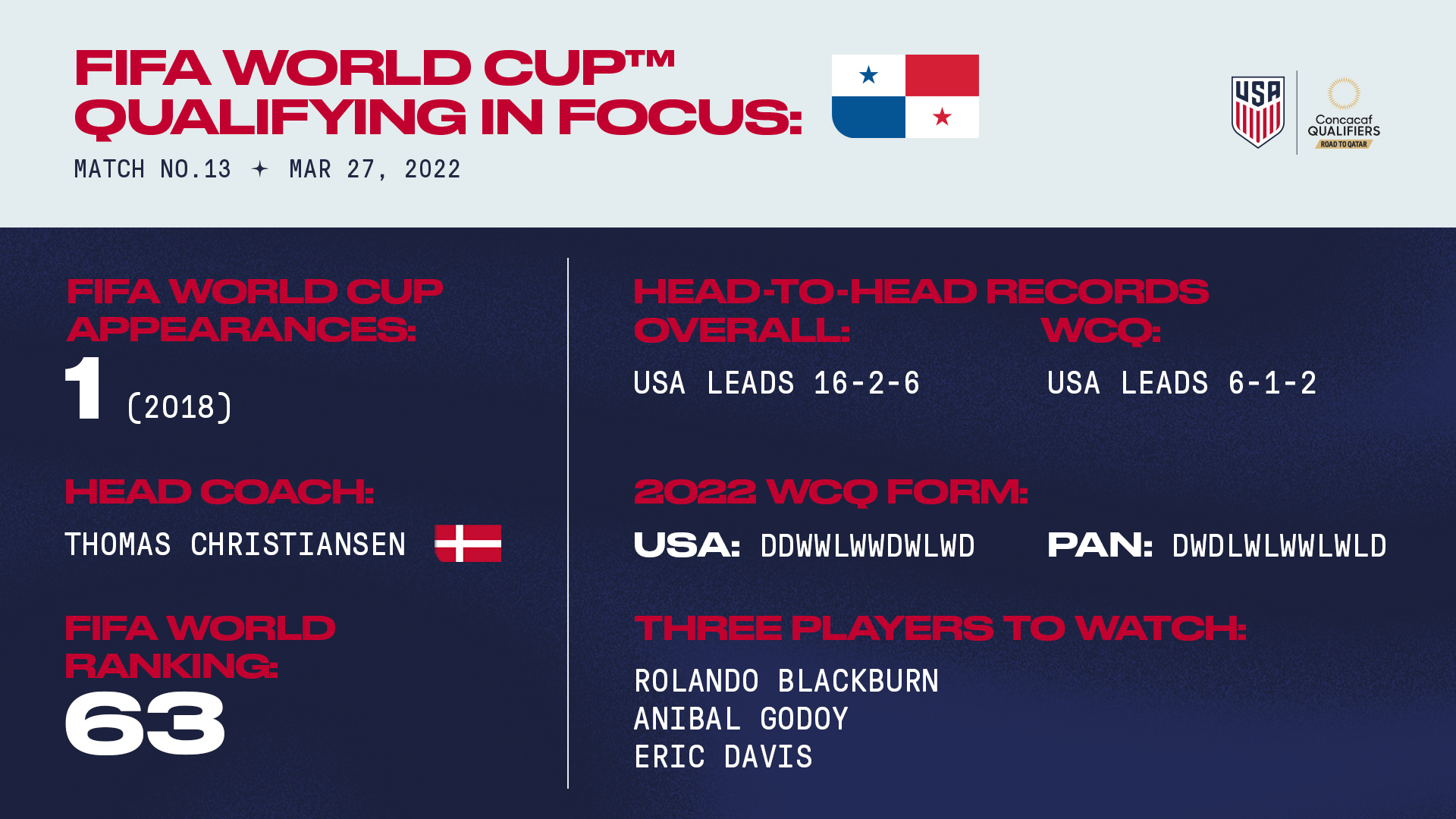 Los Canaleros recorded their first World Cup qualifying win over the USA, a 1-0 victory in Panama City on Oct. 10, 2021, behind Anibal Godoy's 54th-minute goal. Having first met Panama in qualifying during the 2006 cycle, the USA holds a strong 6-1-2 advantage and is 4-0-0 at home, outscoring the Central Americans, 14-0.

In the most recent home confrontation, the USA registered a 4-0 victory in Orlando, Fla. on Oct. 6, 2017. Christian Pulisic, then 19, sparked the USA with an early goal before setting up the first of Jozy Altidore's two scores. Bobby Wood closed out the scoring in the 63rd minute.

Against the Hondurans, the Panamanians pulled off one of their most memorable WCQ comebacks, striking three times in the final 13 minutes to turn a two-goal deficit into a 3-2 triumph. Cecilio (77th minute), Cesar Yanis (80th minute) and Eric Davis (85th minute) scored.

Four days later, the Central American side posted a 2-1 home win over El Salvador, overcoming an early deficit. Cecilio Waterman (50th minute) and Freddy Góndola tallied within a two-minute span at the start of the second half.

During the winter window, the Central Americans were victorious in only one match, starting with a 1-0 defeat at Costa Rica on Jan. 27.

They bounced back with a 3-2 home victory against Jamaica, overcoming an early 1-0 deficit. After an own goal late in the first half equalized the match. Davis (51st minute) and Azmahar Ariano (69th minute) tallied second-half goals to clinch the win.

Panama dropped a 1-0 decision at Mexico on Feb. 2.

The Central Americans allowed two valuable home points slip through their fingers while playing to a 1-1 draw with last-place Honduras on Thursday night. Rolando Blackburn lifted Panama into a 23rd-minute minute lead, but Kevin Lopez equalized in the 65th minute.

Thomas Christiansen, a native of Denmark, took over Panama's head coaching reigns on July 23, 2020, replacing American Gallego. He has guided the Central Americans to a 10-5-6 mark.

The 48-year-old Christiansen played for several clubs in his native country, as well as Spain and Germany during a 15-year professional career. His teams included Barcelona, Sporting Gijon, Racing Santander, Oviedo and Villarreal in Spain and with Bochum and Hannover in Germany.

He was the Bundesliga's joint-leading goal-scorer with Bayern Munich's Giovane Élber during the 2002-03 season.

He played twice for Spain's national team, scoring one goal.

He turned to coaching, directing AEK Larmaca and APOEL in Greece, Leeds United in England and Royale Union Saint-Gilloise in Belgium.

Godoy (Nashville SC) and midfielder Adalberto Carrasquilla (Houston Dynamo) are the only MLS players on the squad.