Heading into the second half of the 2022 Open Cup Second Round game against Memphis 901 3-1 up, Coach Rod Underwood had complete trust in his Chattanooga FC side.

“They have talent that got them to this point, to be on this team,” Underwood said of his NISA league players, who, on paper at least, were the underdogs that day. “I never want to take that away from them because it's their journey.”

History ✅
Chattanooga's professional soccer team advances to the Third Round of the @opencup. #BetterTogether pic.twitter.com/MZgz2JGSfy

For Underwood, it doesn't matter who his side goes up against or what league they’re in. He’s created a set of core values. And they fit any opponent. Going into his first season as head coach of Chattanooga FC, the new coach has put an emphasis on keeping the ball.

“If we have the ball, we can't get scored on,” he told usopencup.com with a smile. “We’re upset when we don't have the ball, so we fight to get the ball back.”

All About the Ball

But it goes a little deeper than that for the 54-year-old Underwood.

“We're only here in Chattanooga because this ball has brought us together…the ball continues to keep us connected on a fundamental level, on a personal level, and on a tactical level. It’s the link.”

Underwood, who says he always wants his players to be “free to express themselves,” never shies away from hard truths. He tells his players exactly what they need to hear in the moment, as he understands it, and he listens to them with the same respect. 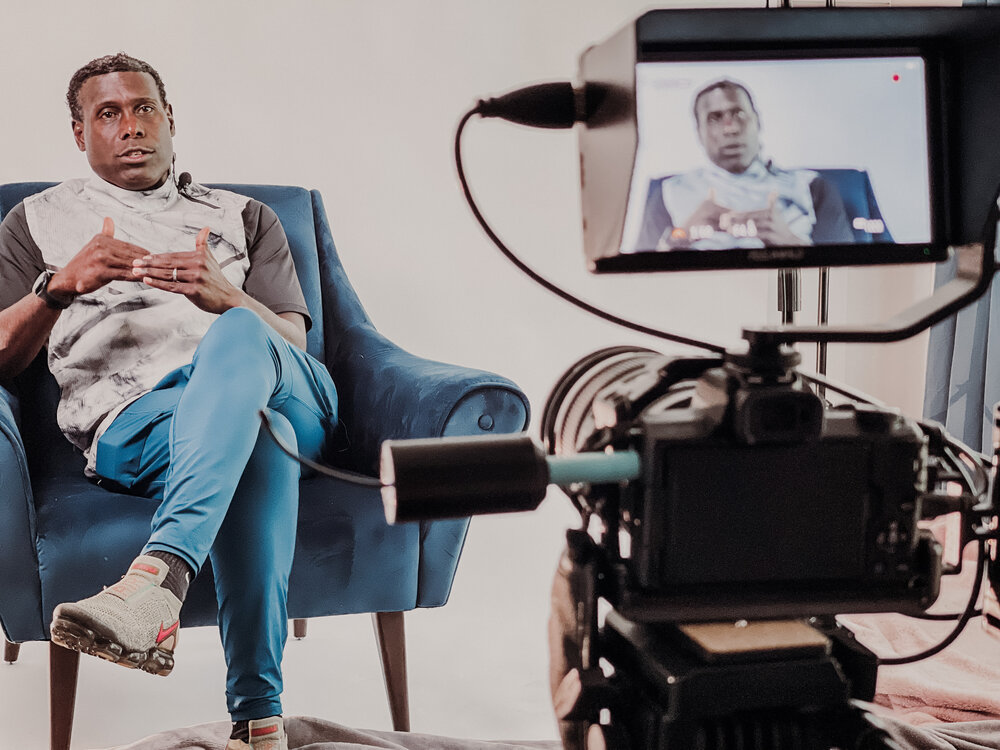 “One thing I learned, especially in my early days of coaching, was that some of these guys are smarter than me,” Underwood admitted.

The boss’s faith paid off and Chattanooga FC, and the club’s throngs of adoring fans, now face a Third-Round road date against reigning Open Cup champions Atlanta United of MLS (who won the tournament in 2019 before a two-year pause caused by the Pandemic).

To understand where Underwood developed his ideals on coaching, we have to go way back. To when he was just a kid, kicking a ball around at the local YMCA in Atlanta, Georgia (quite the coincidental venue given the current circumstances).

Growing up in the 1970s, Underwood wanted to play American football.

“My neighbor played football and his dad was a coach,” Underwood remembered. “He said, ‘Come play on our team.’ But you had to weigh a certain amount and I was too little. Then the next day – I mean, it feels like it was the next day – there was a sign up that said, ‘Come play soccer.’ And I’m like, ‘What is that? OK, sounds fun.’”

Underwood’s mom ended up coaching the team. She didn’t know much about the game – none of his early coaches did – but she was excited and passionate. And throughout his childhood, Underwood honed his craft through countless hours of wall-ball, backyard drills, and pick-up games at the Y. 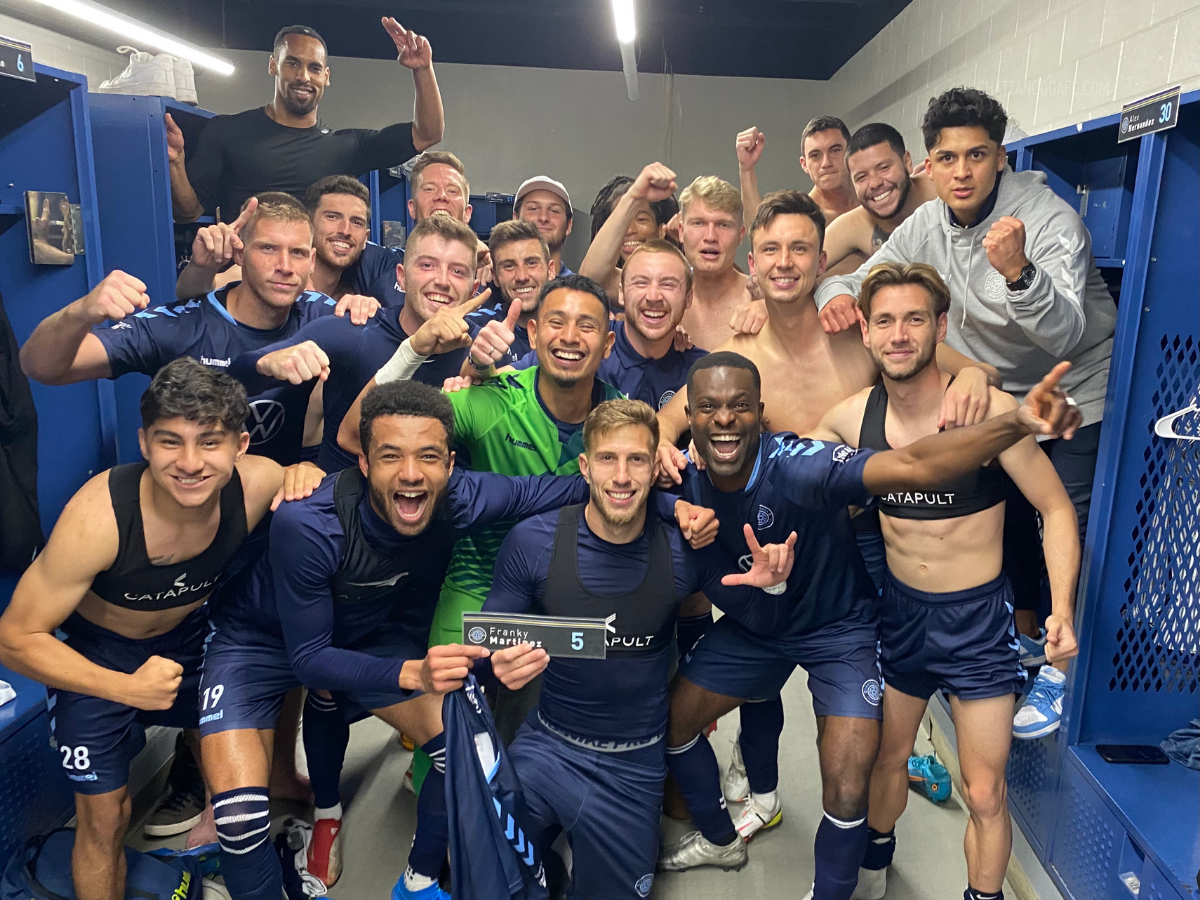 Growing up in a diverse city like Atlanta, Underwood continued, “You started running into people that grew up with the game from South America or from the Caribbean.”

Young Underwood was a sponge, sopping up all he could from whoever would teach him. It wasn't until high school that he got his first taste of a formal education in the game. It came from one Tony Whalen, whose resume includes playing for Manchester United and Manchester City both. He was in the U.S. at the time playing for the Atlanta Chiefs, a professional team competing in the North American Soccer League (NASL), which would usher in an unprecedented soccer boom in the States in the late 1970s.

Tips From an Old Pro

“He stayed with me…probably two hours after training, just working on how to strike the ball,” Underwood said of Whelan, one of several Chiefs that visited his high school practices to help impart the finer points of the game. “And that was like life-changing because no one ever showed me. We all kicked with our toe and we all wore football cleats.”

By tenth grade, Underwood was selected for the Olympic Development Program (ODP) team and recruited to play NCAA division one ball.

Underwood didn’t know it at the time but when he took the field at Furman University’s Paladin Stadium in 1982, he became the first black soccer player in the school’s history. “Growing up as a soccer player in the 70s and the 80s, there was nobody else,” said Underwood, who was the team’s top-scorer and a three-time all-conference selection during his years at Furman. “So what I was seeing at Furman was what I always saw. I was the one that was different, but it didn't faze me.”

Underwood’s mom and dad, who grew up in a small town in Mississippi, always raised their son to be himself – regardless of his environment. “And that's what I've always done,” he said. “Just be me.”

He didn't realize he was breaking barriers until long after. At the time, he was just focused on playing the game and making an impact. “Looking back on it now…at the growth of Furman University… not just athletics but the number of minorities that go to school there,” Underwood said. “‘OK, maybe you did have a hand in that.’”

Underwood turned pro the year after the glitz and glamor of the NASL imploded in on itself. Among the options open to him was a contract with the New Mexico Chiles of the APSL, which was semi-pro at the time. He happily signed.

Underwood got his first taste of Open Cup glory with the Chiles, when, in 1991, he helped the side all the way to the Semifinals. It remains the farthest a team from New Mexico has ever reached in the tournament's 109-year history. 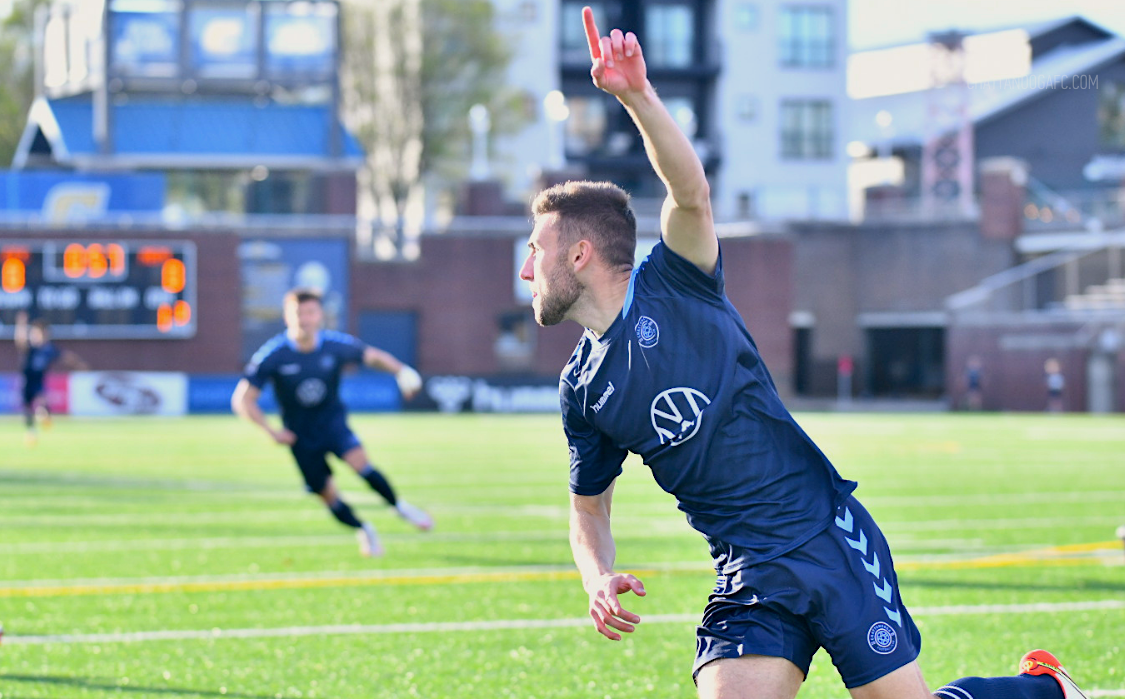 “You get on this run and you start believing…you have a little bit more energy and it doesn't really matter who you're playing,” added Underwood who lined up alongside Richard Farrer, who went on and played in MLS [158 appearances with the Dallas Burn – now FC Dallas] and UCLA standout Will Steadman. “To look back and say, we got that far, it's like, ‘Wow…that was pretty good.’”

His pro career continued with the Albuquerque Geckos (USL), where he won a championship in 1997 as player-coach. It was a year after Major League Soccer’s inaugural season. Underwood wanted to coach at the highest level, but from 2000 to 2007 the only jobs he could find were at the youth level.

“I got a lot of calls from people saying, ‘Well Rod, why aren't you in MLS? Why aren't you at a pro team?’” he said. “And you can read into that however you want…a guy that won a championship, had successful teams…but couldn't get a job at the pro level.”

After taking a job at Wal-Mart, hoping to learn more about business and management, a stint with the Portland Timbers (then in the USL) under Gavin Wilkinson materialized. After that, Underwood joined the Cleveland City Stars (USL First Division) as a head coach in 2009. 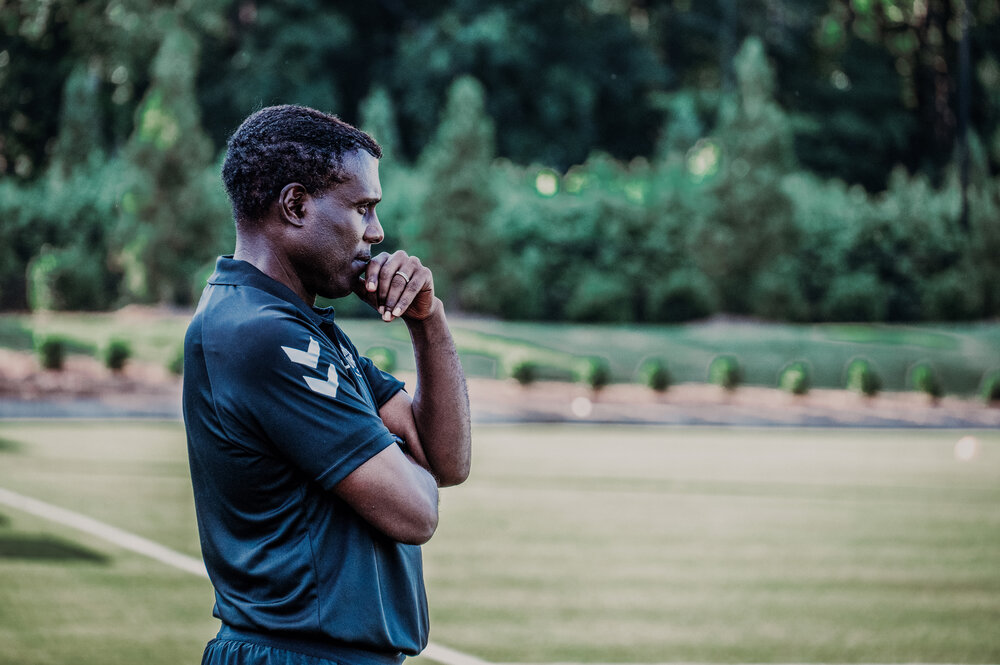 The club was owned by a mission group that operated with two main goals: to be competitive on the field and to minister. Underwood had always wanted to be part of something like this.“All my life, I’ve been looking for how I can use soccer to impact culture and change lives,” he said.

“We [had] this unbelievable bond between the majority of people there,” Underwood remembered of the club that folded after his only year there. “Soon as you walked in the door, you felt like you belonged.”

Before reaching Chattanooga in 2021, Underwood spent time coaching abroad. He always used his faith as a compass. “I went to Trinidad [North East Stars]…when I went to Jamaica [Montego Bay United FC],” said Underwood, who also had a brief coaching stint in Sierra Leone. “Yes, I’m the coach. I’m going there to win games…but I’m also there because it's my call to influence and impact.”

Identity and unity have been the key to Underwood’s Chattanooga team since he joined up in December of last year. Win, lose, or draw – they do it their way.  “The most important thing is our DNA, and ultimately we express ourselves in a way that brings joy to people,” Underwood said.

The Chattanooga FC players will take that very same attitude – honed and preached by their trailblazing boss – into the Third-Round contest against Atlanta United of MLS on April 20th.

“It's cool because it's the place where you grew up, right?” Underwood said, something wistful in his voice. “And Atlanta United is one of the clubs that has changed the face of MLS…and changed the way that the world looks at American soccer.

“So to go up against that club, it's special,” said the man who can still picture, crystal-clear in his mind’s eye, those early days kicking around at his hometown Y. “It's a blessing.” 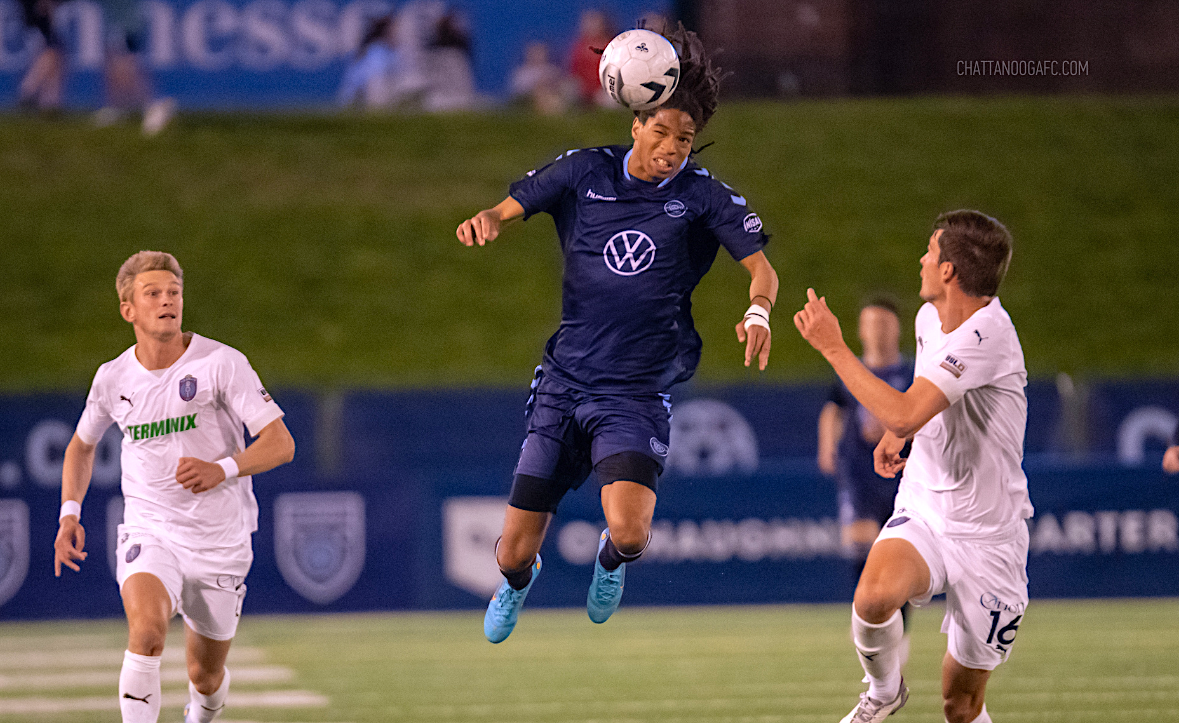