Union Omaha’s Ghana-born goalkeeper Rashid Nuhu talks about living the dream (in more ways than one) ahead of an historic Round of 32 game for the USL League One club.
Michael LewisMay 5 2022
Open Cup

Rashid Nuhu is living the dream (literally and figuratively).

Thanks to the Right to Dream Academy in Ghana, the Union Omaha goalkeeper was not only able to get an education in the United States but is now pursuing a pro soccer career too.

"I'm very appreciative about the Academy. This was an opportunity to get an education,” said Nuhu, a native of Ghana and one of the heroes of Union Omaha's cupset of the Chicago Fire in the Third Round of the Lamar Hunt U.S. Open Cup. "I'm always grateful for that. I never take it for granted. There are kids who would love to be in my shoes and play football. I have to keep working."

Which Nuhu has. In 2021, he backstopped Union Omaha to a first-place regular-season finish in USL League One, in the third tier of the U.S. professional system, before the team captured the national championship. To top it off, Nuhu was named the league's Golden Glove winner after recording 10 shutouts and a 72-percent save percentage.

Then came the stunning result against the Major League Soccer club from Chicago, three-time Open Cup winners, which vaulted the Nebraska club into the Round of 32 against the Northern Colorado Hailstorm at Al F. Caniglia Field (Univ. of Nebraska Omaha) in Omaha on May 11 at 8 p.m. ET (LIVE on ESPN+.

"He's had big-life experiences on and off the field and he's still at a very young age," Omaha head coach Jay Mims told usopencup.com. "He's got still a lot a lot to learn, a lot to go through and I'm sure many more journeys."

"He's been a blessing to have,” the Memphis-born coach admitted. “He's been great."

Nuhu, 26, would not be in the position he’s in if not for the Right to Dream Academy.

He joined the Academy when he was 12 years old. Three years later, Nuhu accepted a four-year scholarship to attend the Kent School in Connecticut. In many respects, he was following in the footsteps so his older brother, Razak Nuhu, a former Ghana international left-back who signed with Manchester City and played on loan with clubs in Norway, Cyprus and Saudi Arabia. 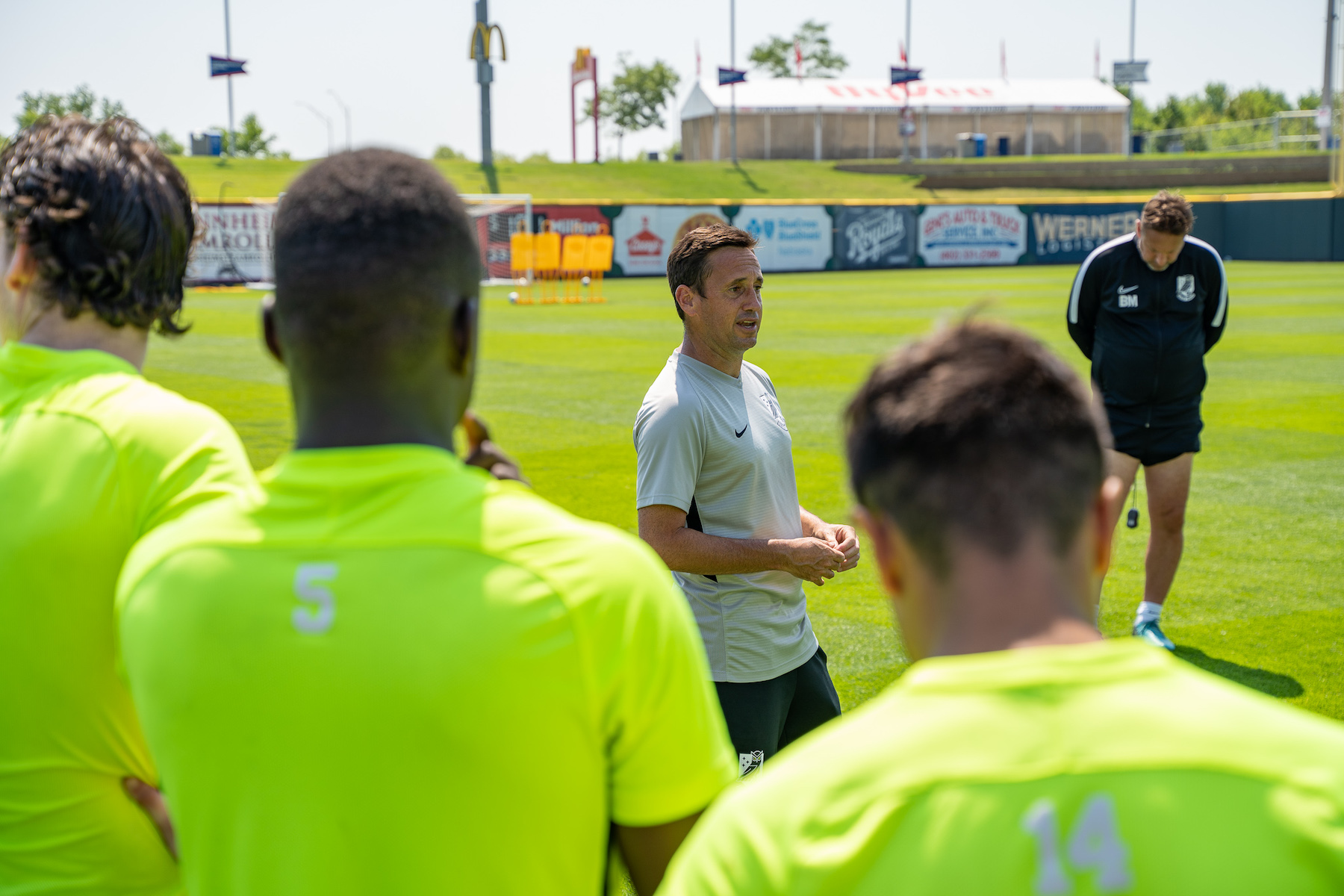 Nuhu said the organization has helped many “young talented African players to follow that dream to become a professional soccer player and getting an education…They keep working with the kids to become better people in general.”

When he first came over to the States, Nuhu admitted he didn't know what to expect -- although he got useful advice from some former Academy students.

"So, you kind of had an idea," he said. "You didn't really have the full experience."

Departing from Accra and landing in New York City can be quite the culture shock, as Nuhu learned.

"That's definitely a shock even though I've been to Europe," he said. "It's definitely a big shock, how big the city is, how tall the buildings are. When I came [officials]…showed me around on what to do or what not to do."

"When I came, it was the fall. It was pretty decent," he said.

But then came the change of seasons. 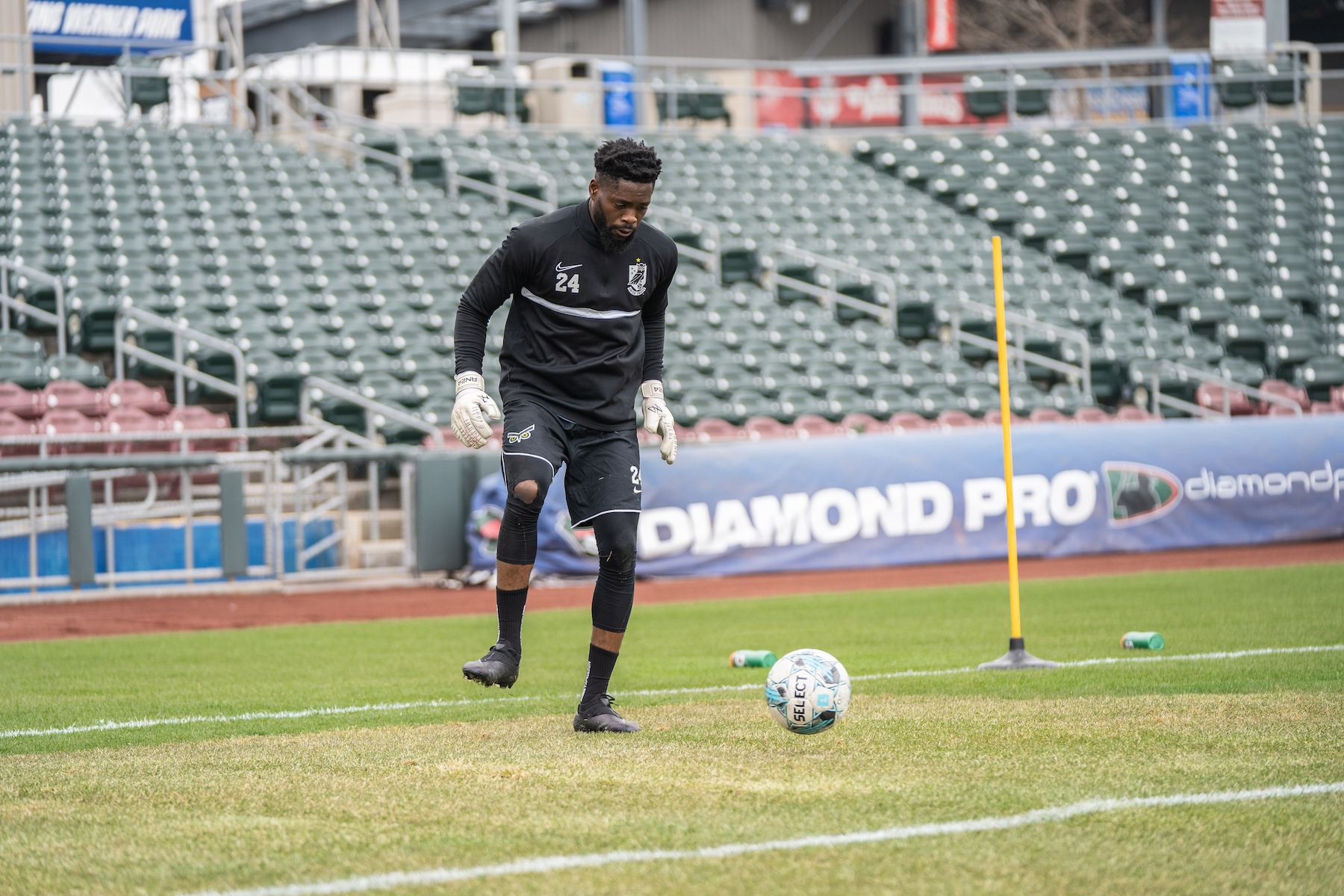 "I didn't have any winter clothes," said Nuhu, who went out and immediately purchased a heavy coat. "I don't think I'm used to it [the cold] yet."

Not unlike many goalkeepers, Nuhu became one out of necessity. When he was 11 years old, the regular keeper of his youth team didn't show up and his coach asked one of his defenders to fill in.

"I was like the tallest on the squad. I was like ‘yeah, sure, why not?’" said Nuhu, who played right and center back at the time.

Growing into the No1 Spot

It wasn't a one-shot deal. "I played well," he said, adding that he enjoyed denying and frustrating the opposition with save after save. "Stopping guys from scoring, I just had joy at that," he added. "Guys were shooting as hard as they can. They got mad at me. I was doing my job."

Nuhu began to learn the intricacies of the position: when to come out of the net, when to stay home and how to stop penalty kicks.

So, not surprisingly, Nuhu learned something about shootouts too. Since coming to the States, he has participated in three and has won them all. Two came while guarding the Fordham University nets.

As a sophomore, he stopped three penalties by Virginia Commonwealth University in the tiebreaker in the 2016 Atlantic Championship final, helping the Rams reach the NCAA Division I tournament while being named the Most Outstanding Player of the competition. 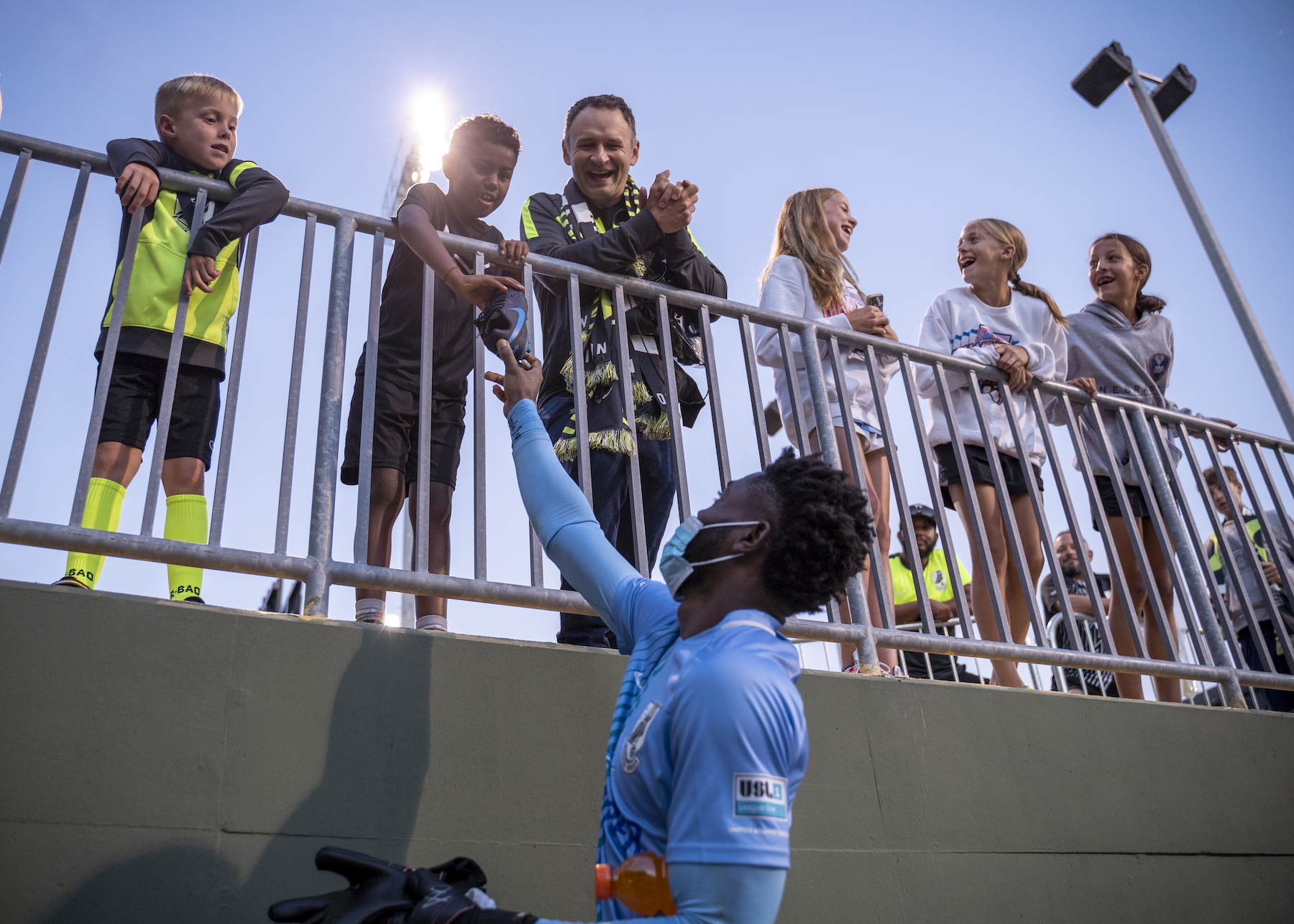 During underdog Fordham's amazing run in the NCAAs, Nuhu made three more PK saves against sixth-ranked Duke University to boost his team into the quarterfinals.

Then came the Open Cup's third round against the Fire. Nuhu made a few vital saves early on to keep Omaha in the match.

Omaha forced the shootout when second-half substitute and defender Alexander Touche scored from 12 yards to tie the game at 2-2 two minutes into stoppage time of extra-time.

Big Save Douses the Fire

On the Fire's sixth and final shootout attempt, Nuhu denied Miguel Navarro before Dion Acoff stepped up to drill his winning kick past keeper Richey Spencer.

"I talked to him before the shootout and said 'Hey, you okay, are you going to be all right? We got this,'" Mims said. "He's a confident goalie. He made a huge save and gave us a chance."

"Just stay calm," he said. "I just can't get frustrated because whenever you start getting frustrated, you misread stuff. I just try to stay calm and have confidence. I'll just do my best. Hopefully, that helps us all out."

Nuhu, who was chosen by the New York Red Bulls in the 2019 MLS SuperDraft before playing for Red Bulls II, explained his shootout strategy while he eyes the shooter.

"Kind of how they put the ball down and line up to the ball," he said, adding that he also looks for body language. "I just pick a spot and just go all-out for that spot."

It’s worked well in three matches, including one of the biggest wins in Union Omaha's four-year history.

"We went toe-to-toe with them [the Fire]. We weren't going to sit back and soak it up and defend and try to get out of there with a 1-0 win," Mims said. "We wanted to play with those guys. It was one of the most entertaining games that I've been a part of as a coach, especially with this franchise.

“From talking to people across the country, they said the same thing. It was just amazing to watch,” the coach went on. “It had everything, shots, saves, drama, a great comeback. It was just a great performance."

It’s something that Mims and Nuhu hope to duplicate against the Hailstorm, who produced a Third-Round cupset of their own with a win over 2009 MLS champions Real Salt Lake.

"They look like a good team," Mims said of the first-year Hailstorm. "We watched the Salt Lake game, and they were better than them that day. They worked harder. They're kind of like us. They have a chip on their shoulder and they're going to want to prove that they want to advance."

Regardless which team wins, a USL League One side will move onto to Round of 16 for the first time in Open Cup history. 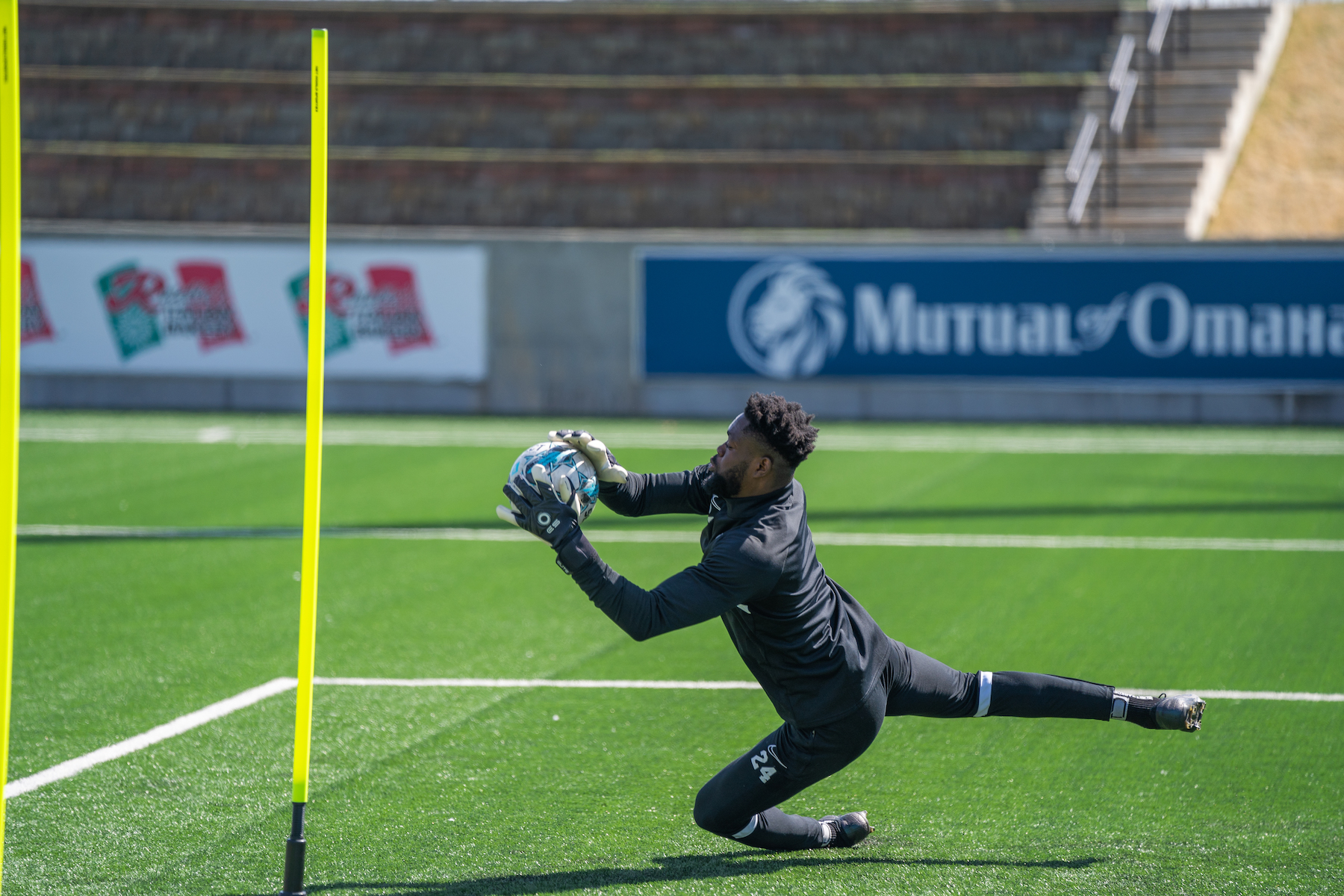 "It's about having a chance to match yourself up against teams that have a lot more resources, a lot bigger budget," Mims said. "That's what's so exciting about the tournament. It's really, really neat. It is important to have representation. This is awesome."

Nuhu agreed. “We're hoping to go as far as we can,” he said -- still believing and still dreaming big.