San Antonio’s Jordan Farr & the Magic of the Big Moment

San Antonio FC’s colorful goalkeeper Jordan Farr talks about the high drama of a Third Round win over Austin FC and why he thinks his second-tier club can do “something great” in the Open Cup.
Jonah FontelaMay 3 2022
Open Cup

“It was the most unique and awesome experience of my career,” said goalkeeper Jordan Farr, still shaking his head days after San Antonio FC’s dramatic win over Austin FC in the Third Round of the 2022 U.S. Open Cup. “You don’t have a lot of control in those moments; you just have to trust yourself.” 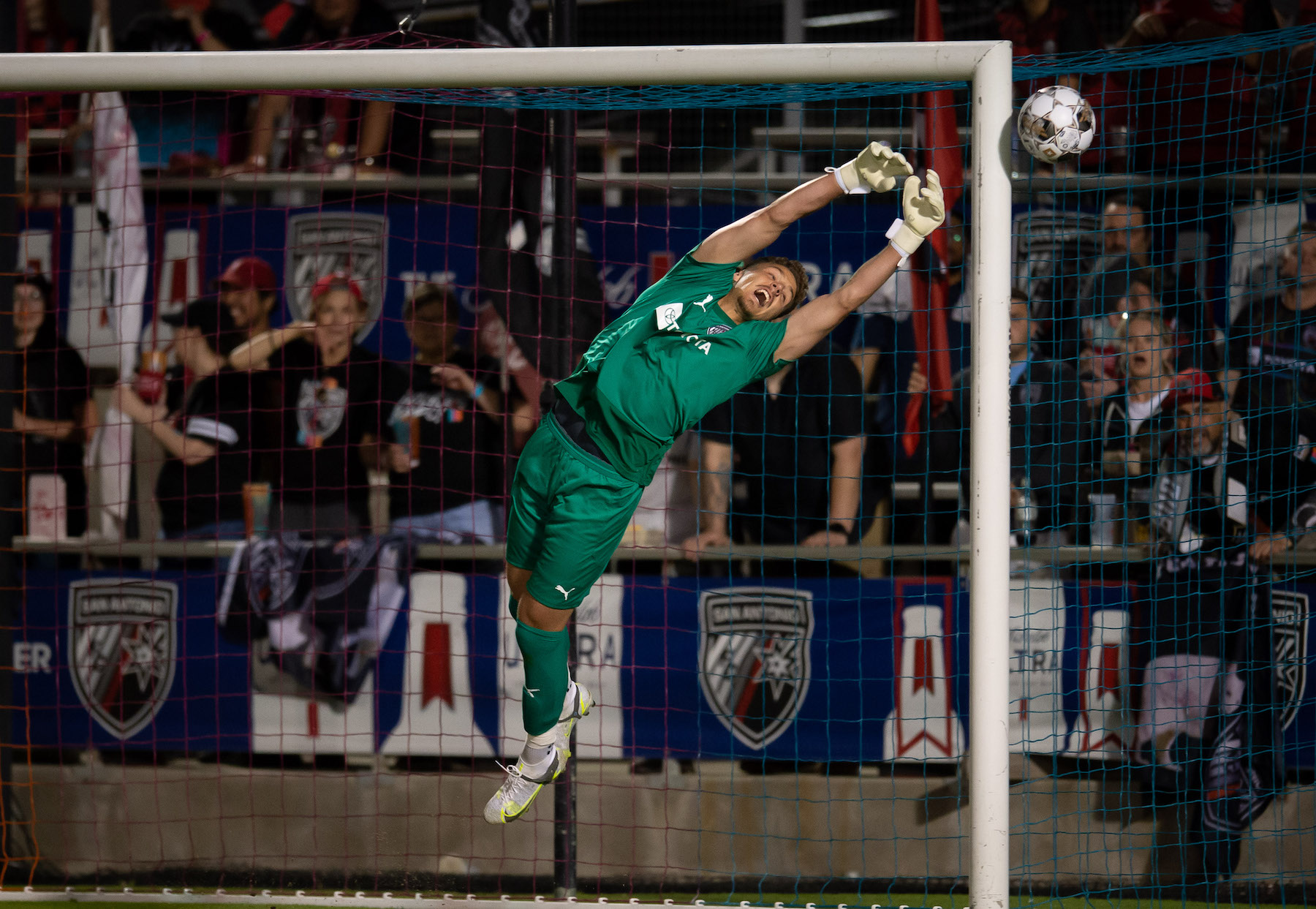 Oregon-born Farr is a natural shot-stopper

Farr, always smiling and a big personality on and off the field, described a game that had everything. A classic Open Cup contest. One for the ages. Underdogs San Antonio clawed back from a one-goal deficit at home against Major League Soccer side Austin FC. With the score 2-1 in their favor five minutes into a 30-minute extra-time session, Farr was forced to make save after save – some brilliant, some zany – under heavy fire to keep the lead safe.

It all culminated in a virtual buzzer-beater of a double save – the likes of which you won’t see again any time soon. Farr sent his teammates, the supporters behind his goal (and a gang of the most animated ball-kids in Open Cup history) into hysterics. He also set a date for San Antonio FC, a second division side from the USL Championship, with the 2018 champions Houston Dynamo in the Round of 32.

On the Ground, Helpless – Hero

“I made the first save and then that guy’s like standing on top of me – our legs are intertwined,” Farr said of the close-range effort from Felipe Martins. “There’s no way I can get up quickly. I remember thinking I’m just going to have to sit here on the ground with my arms out. If it hits me in the face, it hits me in the face.”

Somehow, beyond reason or logic, Rodney Redes’ follow-up effort from point-blank range ended up in Farr’s arms. He clenched the ball, embracing it like something precious, amid a tidal wave of attaboys from grateful defenders. Seconds later, the three whistle blasts went and the game was over. It sparked more pandemonium among the home fans, despair for the large contingent of traveling Austin fans, and a kind of delirium for Farr, the night’s outstanding performer.

“As a goalkeeper, a moment like that is pretty unique,” said the 27-year-old, tall and lean and a natural shot-stopper with preternatural reflexes. “You never get to be the guy who scores the winning goal and goes and slides on his knees by the corner flag. So this was really a first for me. The roar, the sound, everything – it all just felt different.”

While this particular brand of high-drama might be a fresh feeling for Farr, he’s no newbie to being thrown in at the deep end of the shark tank. 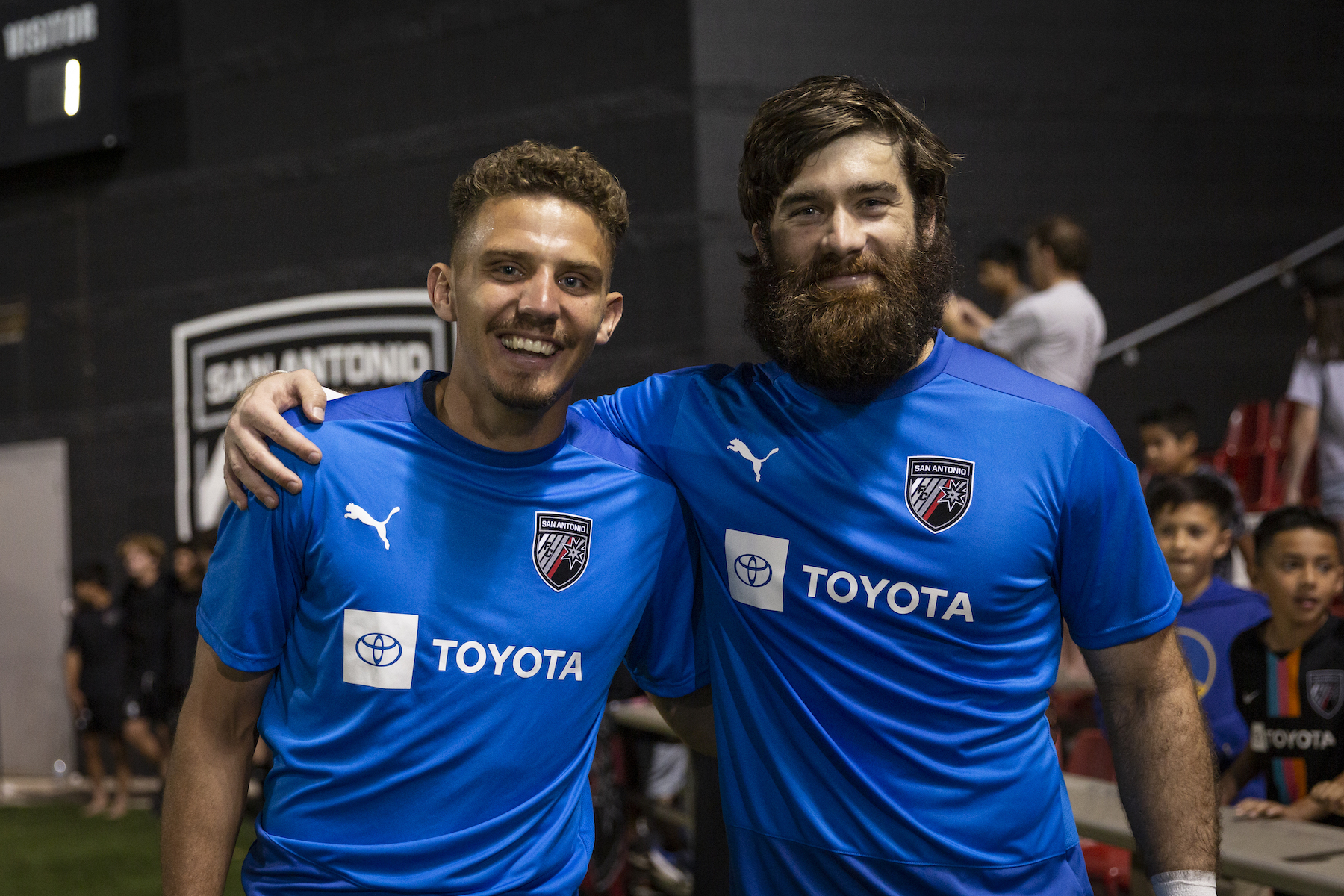 Last year when Matt Cardone, San Antonio’s starting goalkeeper and the beloved face of the club, went down with injury on the cusp of the playoffs, Farr was 1200 miles away in Indianapolis, “eating a slice of pizza and having a beer” at Indy Eleven’s end-of-season awards banquet. He’d made most of his 34 starts (over four seasons at the club) that year, but the team missed the play-offs despite his best efforts.

Gametime (Put Down the Pizza)

“My CEO [of Indy Eleven] walked over and told me to put down the pizza and the beer – you got a game to play in four days,” Farr laughed, describing a rarely-used emergency goalkeeper loan that sparked a sudden (and temporary) move to Texas. “I didn’t even know the rule existed; everything went really fast.”

Farr had every excuse to struggle. He was being asked to slide into a new team with only hours of preparation and to fill in for a club legend (Cardone) whose quiet leadership and placid temperament are the polar opposite of Farr’s own gregarious and outgoing nature. No one of fair mind would have blamed Farr if he flubbed his lines.

Instead, he rose to the occasion. You get the sense that Farr is an improviser at heart – that he prefers the dip and sway of a curveball to the straight-down-the-middle stuff.

“We just had to keep it really simple,” Farr remembered with a smile, speaking of being quietly mentored by Cardone. “My main thing was like can I remember everyone’s name? But the players, staff, everyone accepted me and a lot of pieces had to come together really fast.”

Farr helped the team past Landon Donovan’s Loyal, the Rio Grande Valley Toros and into the conference final where San Antonio lost a slim decision via shootout to eventual champions Orange County SC. It was no surprise, given his performances in that high-octane stretch, that SAFC signed Farr on a permanent contract from the start of the 2022 season – and that he’s made the starting spot his own. 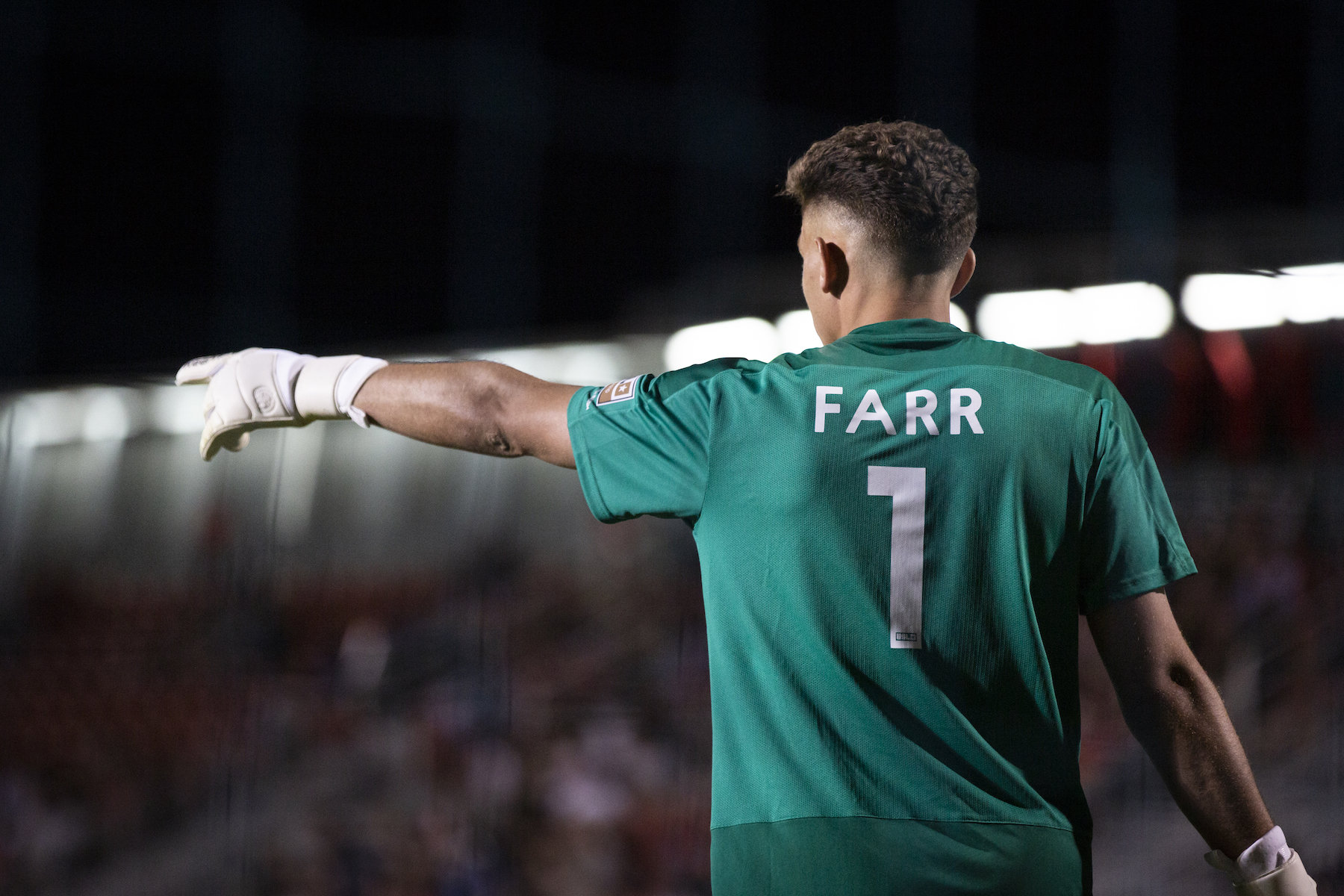 “He performed exceptionally well for us in the playoffs demonstrating the ability to make prominent saves in key moments,” said head coach Marcina of what was a sneak preview of Farr’s 2022 Cup heroics and league play (he’s conceded only four goals in eight league games to start the year). “Jordan is a high character and high-performing goalkeeper.”

Farr at Home in the Cup

The Open Cup, 109-year-old and chock full of quirks and idiosyncrasies, suits a guy like Farr. His back-flip after the final whistle against Austin was just the kind of showmanship that makes America’s oldest soccer tournament tick.

“I love the Open Cup; it’s been good to me,” said Farr, who made his pro debut in the competition back in 2019 with Indy Eleven after an NAIA college career at Corban University in his hometown of Salem, Oregon. “Momentum is huge and you have to ride that wave of emotions. It needs grit and performance  – there’s always a different kind of game, a different kind of energy, in front of you.”

Up next for San Antonio FC, who sit tied for first place in the USL Championship’s western conference after a flying start, is an away date with Houston Dynamo. They’ll once again be up against a team from the country’s top division – and this time without being able to rely on the comforts of home. “When you’re from a division underneath, there’s so much pride that naturally goes into it,” the ‘keeper said. “You really want to show what you can do.” 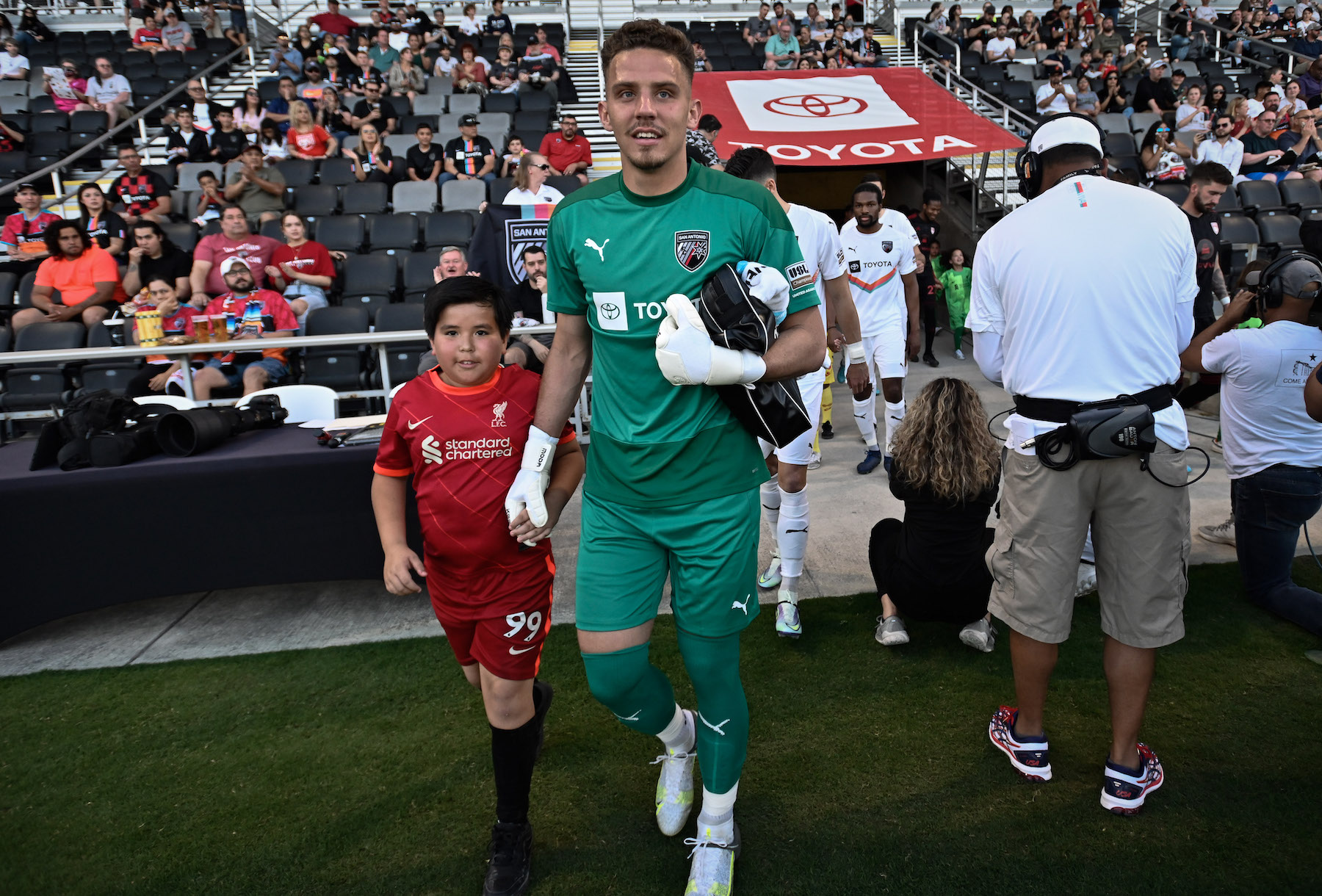 “Emotion matters,” added Farr, an optimist and a proven man for the big moments who’s curious to see how far he can take it. “We’re a team that prides ourselves on mentally being able to really, really get up for games. We just have to keep treating every game like it’s a championship – it might be exhausting emotionally and physically, but I really do believe this team is capable of something great.”