The historic unified bid, which would represent the first time that three nations would jointly host a FIFA competition, was announced by U.S. Soccer Federation president Sunil Gulati, CONCACAF and Canadian Soccer Association president Victor Montagliani, and Federación Mexicana de Fútbol president Decio de Maria at One World Observatory in New York on the 102nd and top floor of the One World Trade Center, the tallest building in the Western Hemisphere.

"This is a milestone day for U.S. Soccer and for CONCACAF,” Gulati said. “We gave careful consideration to the prospect of bidding for the 2026 FIFA World Cup, and ultimately feel strongly this is the right thing for our region and for our sport. Along with our partners from the Canadian Soccer Association and the Federación Mexicana de Fútbol, we are confident that we will submit an exemplary bid worthy of bringing the FIFA World Cup back to North America. The United States, Mexico and Canada have individually demonstrated their exceptional abilities to host world-class events. When our nations come together as one, as we will for 2026, there is no question the United States, Mexico and Canada will deliver an experience that will celebrate the game and serve players, supporters and partners alike.”

The three nations have hosted 13 FIFA events combined (Men’s, Women’s and Youth World Cups and Confederations Cup), which is more than any other trio of geographically connected nations, and set attendance records for five of those events. The 2026 FIFA World Cup will be the first with the expanded 48-team format, requiring facilities and infrastructure that these countries are uniquely suited to fulfill.

The United States hosted the FIFA World Cup in 1994, to date the most successful in history for overall attendance.  USA ’94 served as the catalyst to launch Major League Soccer in 1996, which today fields 19 teams in the U.S. and three in Canada. In addition, the USA welcomed the world for the 1999 and 2003 FIFA Women’s World Cups.

Mexico was the first nation to host the FIFA World Cup for the second time, having first held the event in 1970. In 1986, the Argentine team captained by Diego Maradona captured their second title in three tournaments. El Tri became the first host country to win the FIFA Confederations Cup, collecting the title on home soil in 1999. They repeated that feat at the youth level with a victory in the 2011 FIFA U-17 World Cup.

“For the Federación Mexicana de Fútbol, and the entire Mexican soccer family, it is a source of pride to be candidates, along with the United States and Canada, to host the FIFA World Cup in 2026,” de Maria said. “We have a unique opportunity to be the first country to host three World Cups.  As such we are filled with pride and committed to make it the best ever. Mexico has been recognized for being a magnificent host of past FIFA events, such as the 1970 and 1986 World Cups, the 1999 Confederations Cup, the 2011 Under-17 World Cup, and most recently the 2016 FIFA Congress. If we are selected to host, it will be an honor to welcome everyone with open arms.” 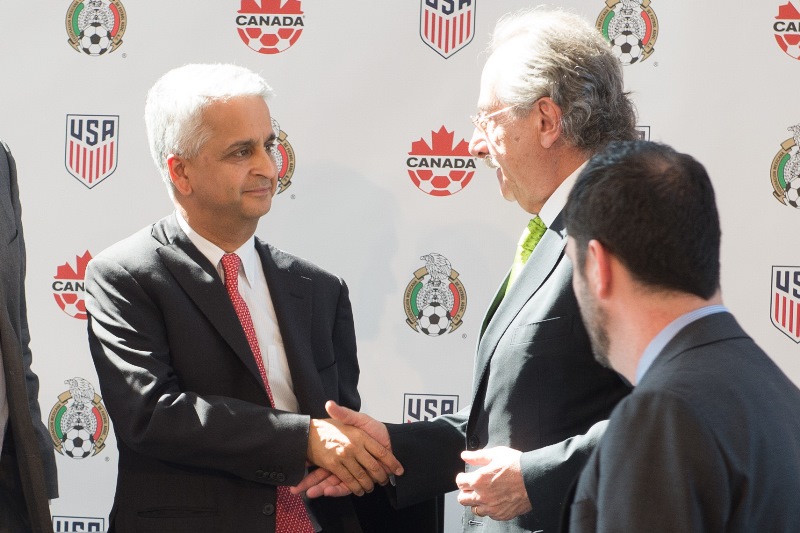 Canada hosted the FIFA Women’s World Cup Canada 2015, which featured an expanded 24-nation field with matches played in six cities in five time zones. With record setting attendance for any FIFA event outside of the FIFA World Cup, more than 1.35 million spectators and nearly 25 million in the United States alone watched the final on FOX. Canada has hosted five FIFA tournaments, including the

“Canada Soccer is honored to partner with fellow CONCACAF member associations USA and Mexico to bid for the 2026 FIFA World Cup,” said Canadian Soccer President Victor Montagliani.  He added that “Canada is the only remaining G-8 nation to have not hosted a FIFA World Cup despite our history of success in raising the bar for youth and women's FIFA tournaments.  We look forward to continuing our successful collaboration with fellow CONCACAF member associations U.S. Soccer and Federación Mexicana de Fútbol under the FIFA Council principles for joint bids and to continue our tradition of hosting record-breaking international events."