BEDOYA: "Being first in the group is the priority."

Seasoned CONCACAF Gold Cup veteran Alejandro Bedoya discusses the importance of making sure the U.S. tops Group B with a good result Saturday vs. Nicaragua
July 14 2017

After taking four points from its first two matches in the 2017 CONCACAF Gold Cup, the U.S. Men’s National Team will aim to make sure the night in Cleveland ends with them sitting in pole position in Group B following their finale against Nicaragua on Saturday.

There are more than a few ways for the U.S. MNT to wind up on top of the group, and with USA-Nicaragua being played after Panama-Martinique the team will know exactly what it needs out of the night cap in order to accomplish the mission.

Having finished on top of its group in 12 or its previous 13 Gold Cup appearances, the MNT has traditionally only needed a draw in its final match to guarantee top spot. According to midfielder and four-time Gold Cup participant Alejandro Bedoya, the fact that there’s a less clear path towards clinching the group is in part a byproduct of the improved competition in the region.

“I think everybody would have preferred to be at six points and to get a more comfortable win against Martinique,” Bedoya said Friday about the USA’s previous two matches. “The reality is that you have to give credit to the teams we’ve played against. They’ve stepped up. Maybe we weren’t sharp enough, but these CONCACAF teams have gotten a lot better since my first go around almost 10 years ago.”

For Bedoya and the U.S., the importance of finishing first is two-fold. First, it guarantees the MNT a Quarterfinal match against a third-place opponent, but it also ensures the U.S. will avoid a potential matchup with Costa Rica, who face French Guiana in their final Group A match Friday night.

“I think it’s important with the way the tournament goes, we want to be able to face one of the third-place teams and then be able to move on to the next stage. Being first in the group is definitely a priority, and tomorrow we need to win by a good score line to be able to do that.“ 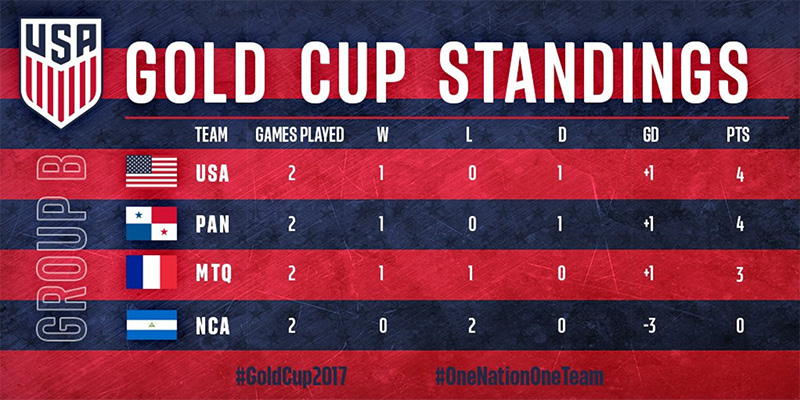 Saturday’s game marks the first meeting between the USA and Nicaragua. While they sit bottom of Group B, Los Pinoleros Albiazules have kept things close, losing 2-0 to Martinique in the opener and even scoring its first-ever goal in the competition to take a 1-0 lead before falling 2-1 to Panama on Wednesday.

Unfamiliar with the Central American side from qualifying and previous tournaments, Bedoya admitted he and his teammates would do most of the learning about their opponents during Friday’s film session.

“I don’t know too much,” he said following training. “I’m sure right now after training we’ll go back, watch the video and study their team. They’re going to fight. All these smaller countries that are playing against us, this is their biggest stage to impress so they’re going to do everything they can. We just need to be sharper and we’ll be ready for them.”