A misplay three minutes into Wednesday night’s 2-0 Gold Cup Quarterfinal win against El Salvador could have dictated a different path for the game.

“I told Tim thank you after the game,” Lichaj said. “He got me out of the dirt there.”

Just before halftime, Lichaj earned redemption in spades. Finding himself in the unusual position of being higher up the field than normal, the right back made a darting run towards the area where Clint Dempsey deftly hit him in stride. Taking a touch into the box, the Nottingham Forest defender blistered his first international goal through the legs of El Salvador goalkeeper Derby Carrillo to send the U.S. into halftime up 2-0 and eventual into the 2017 CONCACAF Gold Cup Semifinals.

“I couldn’t remember the initial bit, but I was high up and I just thought I would continue my run,” Lichaj said about his positioning. “It was a good play, and I think it was Justin [Morrow], Gyasi [Zardes] and Clint. Clint ended up turning in a good position on the pitch and he just slipped me in. I shot low and hard at the goalkeeper and we got our second goal.”

Lichaj was honest in his assessment of his first-half performance, but admitted the goal took some of the shade off.

“It definitely helped out because that first 45 was not my best at all. The goal helped, but it’s still something I need to look at and get better at.” 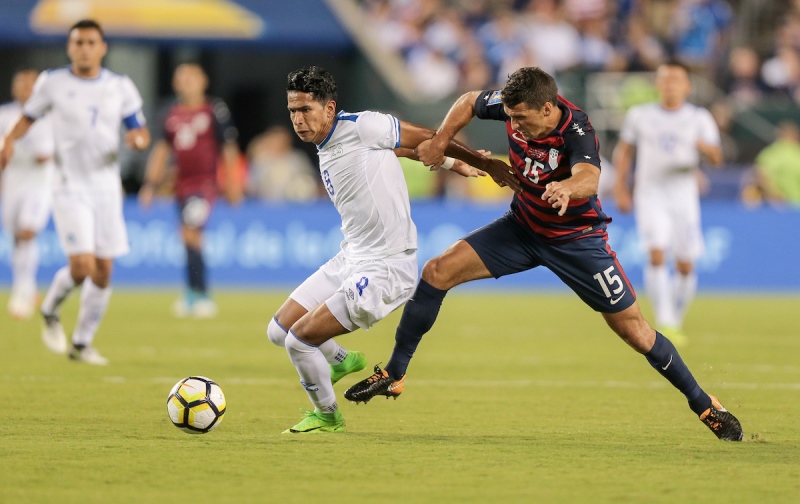 The goal proved to be a nice personal touch for his family. Getting his first long-term look with the U.S. MNT since the 2011 CONCACAF Gold Cup, Lichaj has flown his wife, two daughters, parents and brother to every match this summer, something he plans to continue as the team heads to Dallas for Saturday’s Semifinal against Costa Rica.

Following the game, Lichaj said he got a little insight into how his wife reacted to the goal.

“It felt really good. Ale [Bedoya] texted me. He said he was watching in the stands and that my wife was crying. I’m going to go back to the hotel and talk to her about that, see what she says,” he joked.

With two games under his belt at this year’s tournament, the 28-year-old is now looking to build off and learn from his performances with hopes of helping the U.S. to a sixth confederation championship.

“Personally it wasn’t the best of games for myself, but we ended up winning and getting a clean sheet is always good as a defender. We’re looking forward to playing against Costa Rica in Dallas, and if called upon hopefully I’ll play a lot better.”