Having watched Panama earn a 3-0 win against Martinique, the USA knew it needed to match Los Canaleros’ margin of victory in Saturday’s nightcap against Nicaragua in order to finish on top of Gold Cup Group B.

Though the needed result was straightforward, the opponent certainly came prepared to make life difficult for the MNT. The U.S. went knocking on the door with several first-half opportunities before Joe Corona tucked home the opening goal in the 38th minute.

In the second half, two penalty attempts from Dom Dwyer and Corona were sandwiched around Kelyn Rowe’s first international goal in the 62nd minute, but as time ticked away the third goal appeared like it might elude the United States.

With the fate of a second-place finish being a Quarterfinal matchup with fellow CONCACAF power Costa Rica, the USA got the group clincher from one of the unlikeliest of sources as 21-year-old center back Matt Miazga got on the end of Graham Zusi’s 88th minute free kick to head his first international goal past goalkeeper Justo Lorente.

“We believed in ourselves that we could get goals,” Miazga said post-game. “Obviously we were unlucky with the two penalties, but we knew if we kept knocking on the door, something could come up. I got my chance and I just tried to bury it and it worked out.”

With U.S. MNT head coach Bruce Arena stressing his desire to give experience to players on the roster, Miazga joined goalkeeper Bill Hamid in getting their first minutes of the tournament in Saturday’s win. In total, Arena utilized 22 of the 23 players on the Gold Cup roster through the first three matches. 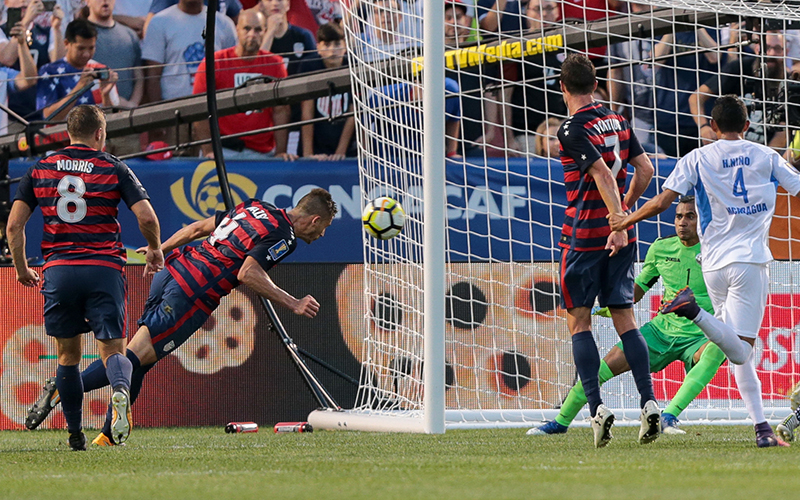 Having logged time in all three of those games, midfielder Dax McCarty was one of the veteran players on the field when the late free kick came up. Knowing Miazga well from their time together at the New York Red Bulls, McCarty gave free kick taker Graham Zusi some advice on the important attempt.

“He’s a big kid – he’s the biggest kid out on the field,” McCarty told ussoccer.com after the match. “He’s always dangerous, and that last play we knew we had to go for it. We knew we had to win by three, we had nothing to lose. I just told Matt to get to the far post and told Graham, ‘Get it up and see if we can make a play on it.’

“It was a great ball by Graham, and I’m really happy Matt was able to finish it off and keep it on frame. It’s a big goal for him, and a bigger one for us.”

Coming into camp from his offseason following a successful campaign on loan from Chelsea with Vitesse where he helped the club win the 2016-17 Dutch Cup, the young center back didn’t see action through the first three games of the U.S. MNT’s summer camp as he continued to work on his fitness level. He was certainly proud to be called upon for such an important match on Saturday.

“I’m in preseason mode, so I’m just building up fitness, continuing to try and establish myself in the group and just work hard in training. Bruce gave me a chance today, so I just wanted to play my game, do my best and contribute to the team.”

Miazga is the youngest of the four center backs in camp, competing with 2014 FIFA World Cup veterans Omar Gonzalez and Matt Besler, as well as 2017 M.L.S. Defender of the Year Matt Hedges, and is embracing the competition for minutes as the team moves forward in the tournament.

“The competition is always good,” he said. “Obviously when you get called up to the National Team it’s the best center backs that our country can offer. There’s always going to be competition – that’s how football works. I feel like the competition brings out the best in all of us. It is what it is. I’m just going to continue to control what I can control: to work hard, play my game and if the manager picks me I’m always ready.”