CHICAGO (July 19, 2017) – Legendary sports executive and National Football League and Major League Soccer owner Robert Kraft has been named the Honorary Chairman of the Board for the United Bid Committee of Canada, Mexico and the United States that will oversee the bidding process to bring the 2026 FIFA World Cup™ to North America.

Kraft has been an important figure in American soccer dating back to the early 1990s when he secured Foxboro Stadium as one of the nine host venues for the 1994 FIFA World Cup. The massive success of the 1994 FIFA World Cup paved the way for the inception of Major League Soccer and on June 6, 1995, the Kraft family became the founding Investor/Operator of the New England Revolution, one of the league’s 10 charter clubs for its inaugural season in 1996.

“Robert Kraft has been one of the most influential figures in modern professional sports in the United States,” said U.S. Soccer President Sunil Gulati. “He is a leader who saw the potential of soccer in America early on and has been heavily invested in the success and growth of the game over the last three decades. Robert will be a great asset to our effort to bring the 2026 FIFA World Cup™ to North America.”

“My first exposure to world class soccer and the unique power of the FIFA World Cup came in 1994 when we hosted six games at Foxboro Stadium. The intensity of the matches, the truly exceptional athleticism of the competitors, the pageantry and energy of the crowds all created an environment unlike anything else in sport,” said Kraft. “Most importantly, the month-long event epitomized all that is great about athletic competition. People from all nationalities and backgrounds gathered together in communal celebrations of the international competition. The FIFA World Cup’s ability to build bridges and bring people together is unlike any other medium. By 2026, more than 30 years will have passed since we hosted the FIFA World Cup and its return to North America is long overdue. I am honored to be serving in this role and eager to do everything in my power to bring the FIFA World Cup back to North America to share the competition with all the deserving fans in the United States, Canada and Mexico.” 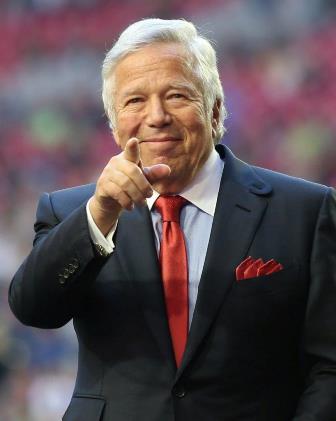 Under Kraft's leadership, the Revolution have made five MLS Cup appearances and celebrated both a U.S. Open Cup and a SuperLiga title. Foxborough has also played host to the MLS Cup three times, including the 2002 Final between the Revolution and LA Galaxy, played at Gillette Stadium in front of the largest crowd in MLS postseason history (61,316).

Kraft is widely recognized as one of the most successful owners in professional sports. Since Kraft purchased the New England Patriots in 1994, the club has won more games, playoff games (28), division titles (16), conference titles (8) and Super Bowl championships (5) than any other team in the NFL.

A native of Brookline, Mass., Kraft attended public schools before matriculating to Columbia University on an academic scholarship. Upon graduation, he received a fellowship to Harvard Business School, where he earned a master's degree in business administration.

Kraft began his business career with the Rand-Whitney Group, Inc. of Worcester, Mass., a company that converted paper into packaging for various industries. He later acquired the company. In 1972, he founded International Forest Products, a trader of paper commodities that now does business in more than 90 countries. Together, Rand-Whitney and International Forest Products comprise one of the largest privately-owned paper and packaging companies in the United States. Over the past five decades, the Krafts have been one of New England's most philanthropic families, donating hundreds of millions of dollars in support of local charities, civic affairs and health care.

The United Bid Committee kicked off its efforts last week with the formal launch of the committee and the commencement of an outreach program to more than 40 cities, under an executive leadership team that includes Executive Director John Kristick, Managing Director of Technical Operations Jim Brown, Montopoli, who is the Canada Soccer General Secretary, and Mexico Bid Director Yon De Luisa, who is a Televisa Vice President.

The deadline for the submission of the formal bid to FIFA is March 16, 2018. With less than nine months remaining, there’s anticipation that a record number of cities will compete to serve as official host cities. Collaboration between all levels of government, along with the business and soccer communities, will be critical to demonstrate to FIFA that the first World Cup to be held in the CONCACAF region since 1994 should be awarded to Canada, Mexico and the United States.

The three nations have hosted a combined 13 FIFA World Cups (men’s, women and youth), more than any other trio of geographically-connected nations, and set attendance records for five of those events. The 2026 FIFA World Cup™ will be the first with the expanded 48-team format, requiring facilities and infrastructure that these countries are uniquely suited to fulfill.

FIFA has established a deadline of August 11 for member associations to confirm their intention to compete to host the 2026 FIFA World Cup™. All competitors must then submit a bid proposal for consideration by the FIFA Congress next June.