Japan and the USA will be forever linked in women’s soccer lore, having met in three consecutive world finals, at the 2011 Women’s World Cup, the 2016 Olympics and the 2015 Women’s World Cup. As the teams prepare to meet again, this time in the finale of the 2017 Tournament of Nations, here are five things to know about Japan:

The Next Generation
Japan is in a rebuilding mode as it sets its sights on qualifying for the 2019 FIFA Women's World Cup in France, and of course is very focused on winning a medal at the 2020 Olympics at home in Tokyo, but the Tournament of Nations roster still features some vastly experienced players in midfielders Mizuho Sakaguchi (110 caps/28 goals) and Rumi Utsugi (97/5) who plays in the NWSL with the Seattle Reign. Defender Aya Sameshima (79/4) has been a fixture in the back for years. Forwards
and Yuika Sugasawa both have scored 11 international goals in 22 and 42 caps, respectively.

New Leader
Following its failure to qualify for the 2016 Olympics, Japan fell from fourth in the world to seventh (and is now sixth), and long-time head coach Norio Sasaki, who led Japan to its greatest triumphs, stepped aside. Asako Takakura, who is one of the pioneers of Japan women's soccer, was appointed as the first female coach of Japan's senior Women's National Team.

The four-time Asian Women's Coach of the Year made her National Team debut at the age of 16 and was a midfielder in her playing days. She earned 79 caps for Japan while scoring 30 goals. She played in the 1991 and 1995 World Cups, as well as the 1996 Olympics.

She has been an integral part of the Japanese coaching infrastructure for years, having coached every age group from Under-13 upwards. She led Japan to the 2014 Under-17 Women's World Cup title and the 2015 Asian U-19 Championship while also serving on the FIFA technical study group at last year's World Cup. She also coached Japan to third place at the FIFA U-20 Women's World Cup in Papua New Guinea, defeating the USA 1-0 in the bronze medal game.

So Far In 2017
Japan participated in the Algarve Cup in Portugal this year and had a mixed bag of results. Japan fell to Spain 2-1 in group play (Yokoyama scored the goal), then defeated Iceland (2-0 on two goals from Yui Hasegawa) and Norway (2-0 on two goals from Yokoyama) before falling to the current 2017 UEFA Women's Euros host and semifinalist Netherlands, 3-2, in the fifth-place match. Yokoyama scored one of the two goals for the Japan and the other came via a Dutch own goal. 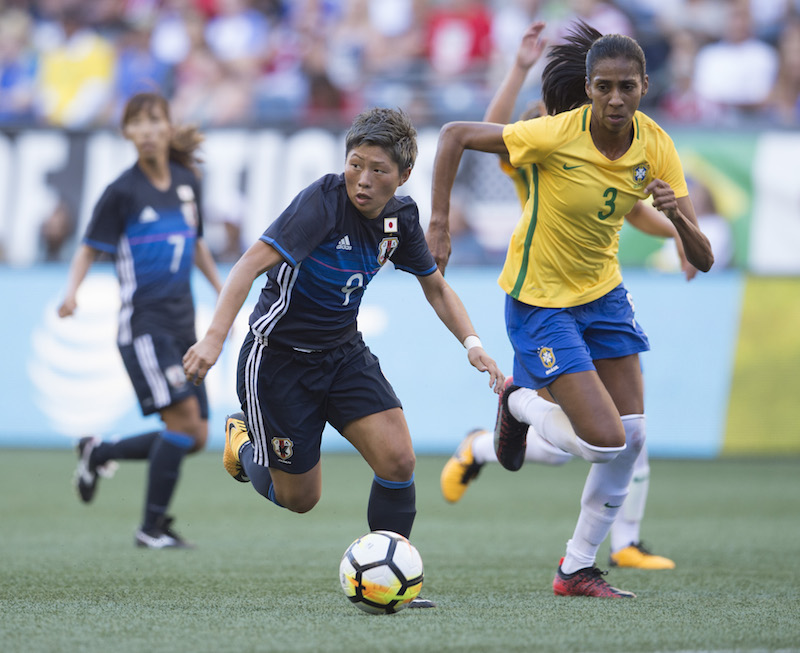 In its three most recent friendlies before the Tournament of Nations, Japan defeated Costa Rica 3-0 in April in Kumamoto on goals from Yokoyama, Mina Tanaka and Yuka Momiki, then got some revenge in June in the Netherlands, defeating Holland 1-0, on yet another goal from Yokoyama before traveling to Belgium and drawing, 1-1, with the goal coming from Sugasawa.

At the 2017 Tournament of Nations, Japan drew Brazil 1-1 in its first match and fell to Australia 4-2 in its second, thus dropping out of contention to take home the tournament title.

Long-Time Rivals, Long-Time Respect
The USA and Japan have a rich history dating back to 1986, the second year of the U.S. WNT program.

Most Recently…
The first meetings between the two teams after the 2015 Women's World Cup Final came in June of 2016 with the teams playing to a wild 3-3 draw in Commerce City, Colo., as hometown hero Lindsey Horan scored late to make it 3-2, but Japan equalized in stoppage time.

The USA then won 2-0 in three days later in Cleveland, getting goals from Julie Johnston and Alex Morgan, in a match that was called in the 76th minute due to weather. With the lopsided score line in Canada being the exception, of the last 12 matches between the teams since 2011, all but two have been decided by two goals or less.