On Sept. 14, FIFA approved a change of national association for Sofia Huerta, making her eligible to represent the United States at the international level. Huerta had previously represented Mexico at the youth and senior levels. The very next day, Huerta made her U.S. WNT debut, coming on in the 51st minute of the match against New Zealand in place of Taylor Smith. Here are five things you should know about the newest member of the U.S. WNT player pool:

The Gem State
Sofia Huerta was born and raised in Boise, Idaho, making her the first player from the state of Idaho to earn a cap with the USA.

Huerta grew up as the youngest of three children, with her sister Andrea (six years older), and brother Alex (four years older) and their parents Jody, a Wisconsin native, and Mauricio, who was born and raised in Puebla, Mexico.

“I lived in Boise until I left for Santa Clara in 2011,” said Huerta. “Boise is such a beautiful place. It’s outdoorsy, people are very active and everyone is really nice. I try to go back whenever I get a chance. My parents still live there.”

A Love for the Ages
While Huerta’s childhood may seem relatively normal and All-American, Huerta’s parents story is a fascinating one, and one that the 24-year-old is very proud of and loves to share.

"My mom was born and raised in Wisconsin and went to the University of Wisconsin,” said Huerta. “My dad, who was born in Mexico and was in an engineering program in Puebla, was selected as one of four people who earned a spot to go study in the engineering program at the University of Wisconsin during his junior year and that’s where my parents met. After that one year, my dad returned home but my parents kept in touch and stayed together, and then four years later after my mom was all done with school, she got a pretty cool graduation ticket from her parents – a one way trip to Mexico. And they’ve been together ever since. It’s crazy to hear my parents talk about their early years together. Sometimes I don’t believe some of the stories they tell!”

Playing for Mexico
Huerta represented Mexico in official competition at the Under-20 National Team level, playing at the 2012 U-20 FIFA Women’s World Cup in Japan, and earned five caps at the senior level, which included one against the U.S. in 2013. With her first USA cap against New Zealand on Sept. 15, Huerta became the first player to play for and against the senior U.S. Women’s National Team.

Like millions of young girls across the USA, when Huerta was young, her ultimate dream was to play for U.S. Women’s National Team. When she got to the U-20 level, she was in the U.S. player pool, but not high enough to be selected to play in a youth World Cup, so she made the decision to accept the call-up from Mexico, a decision she was proud to make, but one that was incredibly hard. 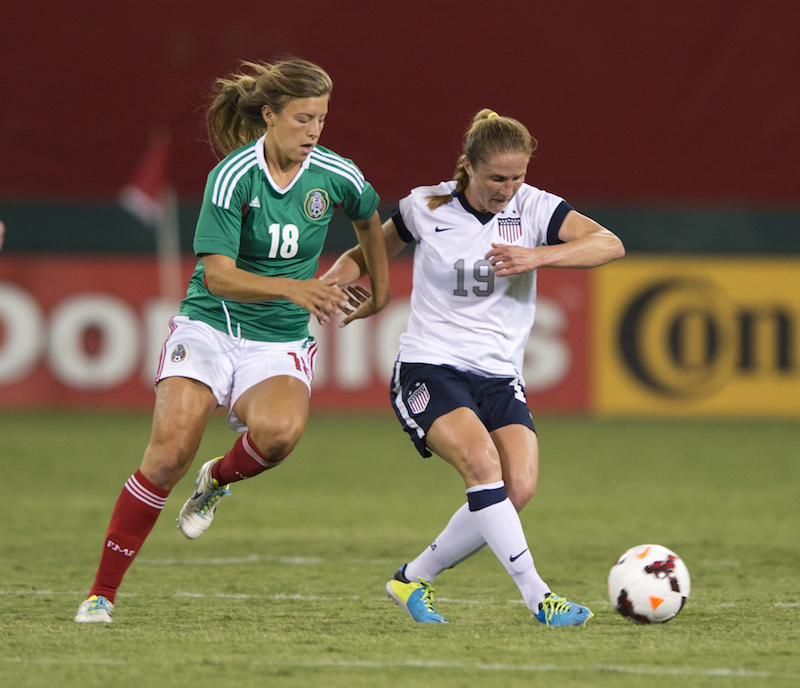 Huerta is the first player to play FOR and AGAINST the USA.

For Huerta, it was an honor to play for Mexico, a country where much of her extended family still lives and a country she loves. She has visited multiple times and has a strong affinity for her Mexican heritage. Still, she also knows that she’s an American through-and-through.

“So many of my family members live in Mexico, but truthfully, the support from them is incredible. They just want me to fulfill my dreams. They were there supporting me when I played for Mexico, and they’re now supporting me when I’m playing for the USA.”

A New Chapter with the U.S. WNT
Conversations initiated between Huerta and the U.S. Women’s National Team staff in late summer as she was enjoying another fine season with the Chicago Red Stars. U.S. head coach Jill Ellis wanted to bring her into camp to train with the team during the 2017 Tournament of Nations. While Huerta was not eligible to play for the USA at that time, and with nothing guaranteed, she expressed her sincere interest in giving it a go with the U.S. team so U.S. Soccer began the process of requesting a one-time change of national association with FIFA.

On Sept. 14, 2017, U.S. Soccer received word that FIFA had approved the change, which meant Huerta immediately became eligible to play for the USA and was officially included on the game day roster for the match against New Zealand. She started the match on the bench but in the 51st minute Taylor Smith went down with an injury and Huerta was subbed in, earning her first U.S. WNT cap. 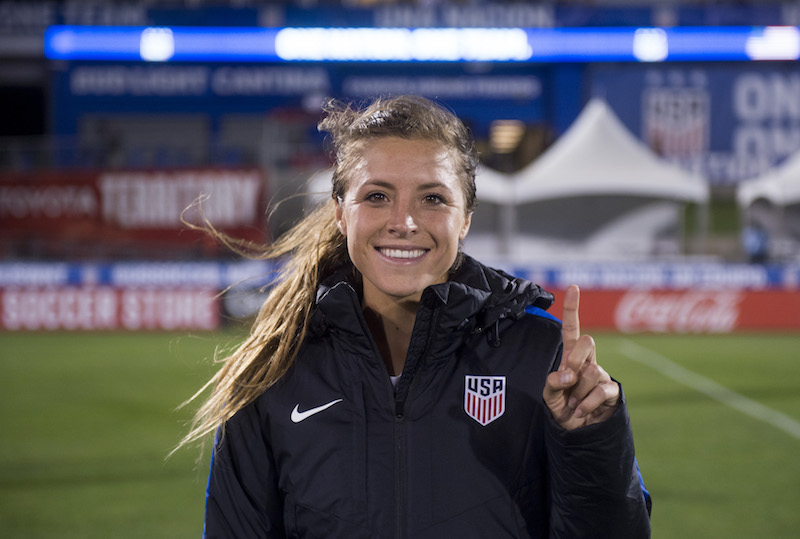 It was a wild two days for Huerta, who following the match shared her feelings on the emotional roller coaster.

“It’s been amazing,” she said. “I didn’t know if the paperwork would go through before the game against New Zealand so getting that news and then going into the game was a feeling I’ll never forget. Everyone was really supportive. When my teammates found out my papers had gone through they all came up to me and said congratulations. Going into this game everyone just said, ‘You’ve been playing soccer forever. Be confident.’ It was great to have the support of the staff and my teammates.”

Huerta’s 39-minute debut was certainly exciting and nerve-wracking, but a highlight came when she earned her first assist in a U.S. uniform, setting up Alex Morgan’s 79th minute goal to cap a 3-1 win in front of a near-sellout crowd of 17,301 at Dick’s Sporting Goods Park.

“I was really excited to be on the field and help in any way I can,” she said. “This is something I had been dreaming about for a long time and to play in front of a big crowd like that wearing the U.S. jersey was surreal.” 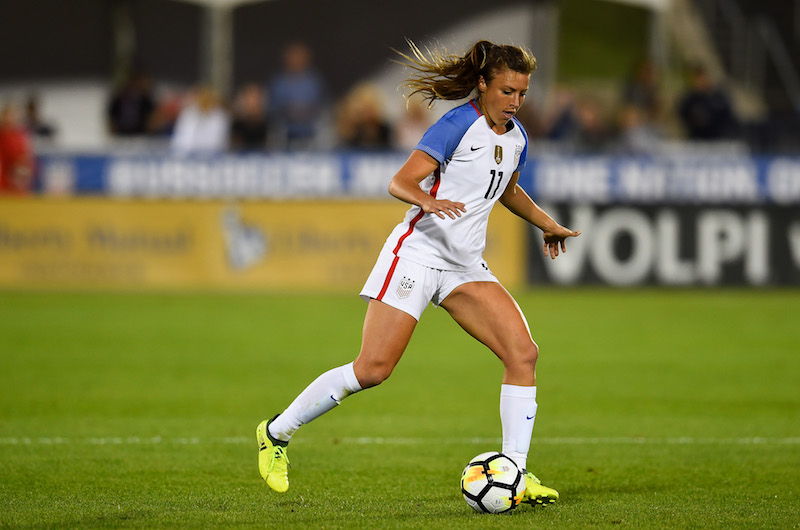 She earned her first assist on Sept. 15 against New Zealand.

Evolution with the Red Stars
The former Santa Clara University star has scored 19 goals with nine assists in 63 career NWSL games, all for the Chicago Red Stars, which gave her a valuable platform to show the U.S. coaches that she could possibly be a contributor. Huerta was drafted to the NWSL in 2015 and since then has played her entire professional career with Chicago.

During her NWSL career, Huerta has always had a familiar face near her. Julie Ertz, another Santa Clara grad, also plays for Chicago and has known Sofia since 2005. 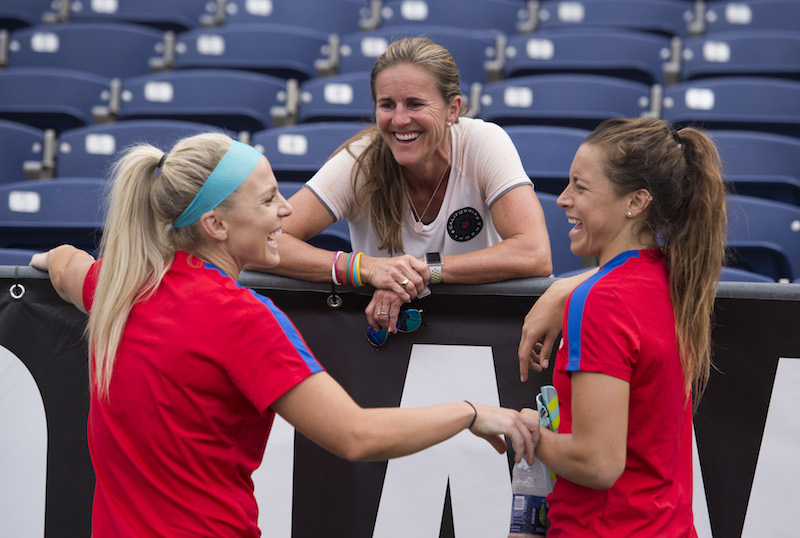 In the WNT environment, she not only has Ertz, but also four other Red Stars’ teammates in Alyssa Naeher, Casey Short, Christen Press and Morgan Brian. In fact, against New Zealand on Sept. 15, when Casey Short was subbed into the game in the 77th minute, six of the 11 U.S. players on the field were Chicago Red Stars. While club allegiances are put aside when national pride comes into play, the sense of familiarity has certainly made the transition to the international game a bit easier for Huerta. No matter where she looked on the field, she had a club teammate to help her feel confident in a high-pressure, high-speed and high-stakes match.

“I did feel more comfortable seeing them there because I see them every day and I train with them all the time,” she said. “First caps are always a little nerve-wracking so I’m glad that my Red Stars were there with me.”