Coming off a commanding 3-0 win in their tournament opener against the host nation India, the U.S. Under-17 Men’s National Team continues play at the 2017 FIFA U-17 World Cup on Monday, Oct. 9 when it meets Ghana, which defeated Colombia 1-0 in its first match, at Jawaharlal Nehru Stadium in New Delhi. The game will be televised on FS2, and UNIVERSO at 7:30 a.m. ET.

Here are five things to know about Ghana:

Ghana qualified for the 2017 U-17 World Cup by finishing as the runner-up at the 2017 Africa U-17 Cup of Nations in Madagascar. Drawn into Group A, Ghana topped the four-team group to advance to the semifinals and simultaneously clinch its spot at the World Cup. Following a 4-0 victory over Cameroon, the Black Starlets took down Gabon 5-0 before finishing the group stage with a 0-0 draw vs. Guinea. In the semifinals, Ghana defeated Niger in penalties, 6-5, after finishing regulation scoreless. In the final, the Black Stars fell to CAF champions, Mali.

Ghana is making its ninth all-time appearance at the FIFA U-17 World Cup and first since 2007.

With all 21 players in the roster playing domestically, the highest density of players comes out of clubs WAFA FC and Right to Dream Academy FC, each with three players represented on the roster.

Known for their speed, explosiveness and athleticism, many of soccer’s all-time greats have come out of Ghana. A few notables include: Abedi Pelé, Michael Essien, Samuel Kuffour, Tony Yeboah and Asamoah Gyan. Essien, who continues to receive call ups to the Ghanaian Men’s National Team played in both a U-17 and U-20 World Cup. His U-17 World Cup came in 1999, when the former Chelsea midfielder helped to crush the American dreams of standing on the podium for the first time ever. Kuffour also found great success during his two U-17 World Cups, claiming a Championship in 1991 and losing in the final in 1993.

Before the FIFA U-17 World Cup, forward Eric Ayiah earned the silver boot during the 2017 Africa U-17 Cup of Nations, which serves as the Confederation of African Football’s (CAF) qualifying tournament for the World Cup, by scoring four goals. Ayiah, who serves as the Black Starlets' captain, picked up his momentum right where he left off, assisting on Ghana’s lone, game winning goal in the team’s first game of the U-17 World Cup against Colombia. In the 39th minute, the forward carried the ball up the left flank and sent in a dangerous ball that found his teammate, midfielder Sadiq Ibrahim, on the back post to finish the job. 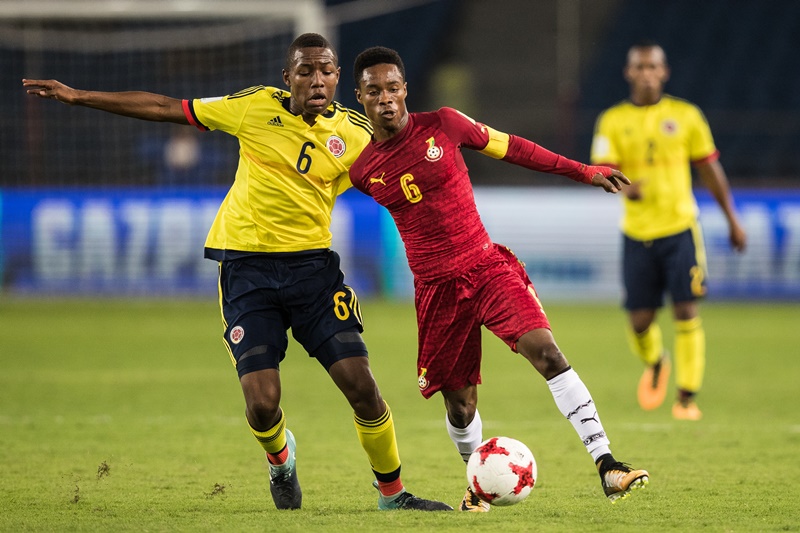 Ayiah (right) will be a player to keep your eye on when the USA take on Ghana.