With his arrival to the Men’s National Team, 17-year-old Josh Sargent is the first U.S. player to receive call-ups from the U-17, U-20 and senior MNT in the same year. Here are five things you should know about the young striker who has added his name to U.S. Soccer’s history books. 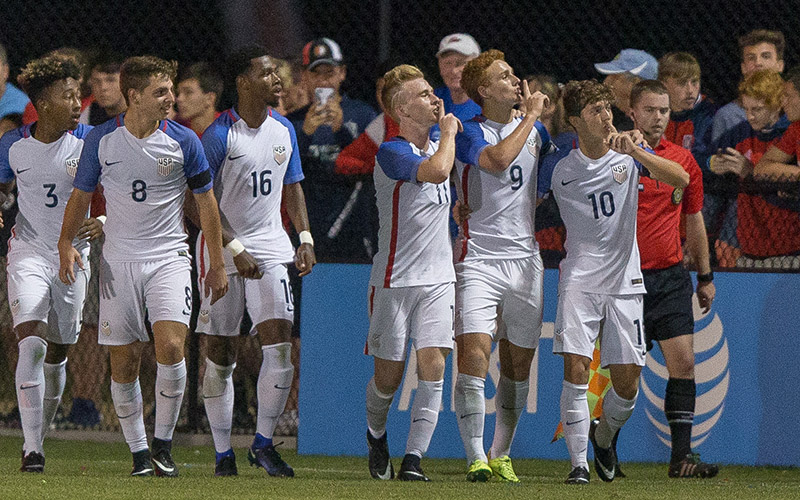 Hailing from the St. Louis suburb of O’Fallon, Josh Sargent made early plans when it came to soccer. According to his mother Liane, the future U.S. forward learned how to kick a ball at age three and began telling friends and family that he was going to be a professional soccer player one day.

The soccer-rich environment of St. Louis certainly helped nurture those ambitions, but they were cultivated by his family as well. Both Liane and his father Jeff played collegiately, while his two sisters are also following in his footsteps playing the game.

Along with having a soccer family, Sargent credits the players and staff at SLSG for helping him reach the U.S. Youth National Team setup.

“It has been great these past few years,” Sargent told ussoccer.com in October 2016. “Playing in the Development Academy has really improved my game and the coaches know what they’re talking about. The coaches are great guys. They’ve not only taught me how to be a better soccer player but how to become a better person overall. They are the type of people that will take care of you, mentor you, and show you what to do and how to do it.” 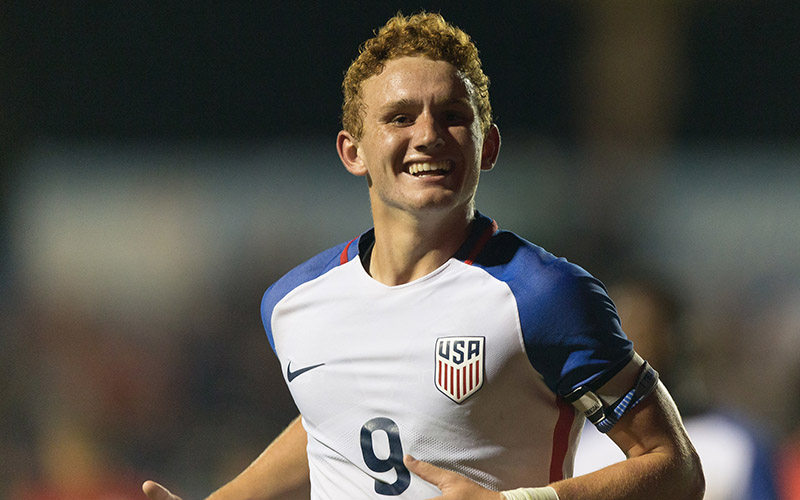 Having first appeared at a U-14 Training Camp in 2013, Sargent progressed on to the U-15 level where he notably took part in an international training camp in England in 2015.

Towards the end of that year, Sargent played for the rising U-15 Boys National Team at the 2015 Nike International Friendlies and then joined the U-17 MNT Residency Program. Prior to the 2017 CONCACAF U-17 Championship in April, he amassed 14 goals and seven assists in 29 international matches, including four goals and two assists during three matches as the U.S. won the 2016 Nike Friendlies.

Sargent captained the U-17 MNT at the 2017 CONCACAF U-17 Championship, racking up five goals and two assists in five games as the U.S. finished runners-up in the tournament and qualified for October’s World Cup in India. Sargent particularly impressed during the USA's 4-3 comeback win against Mexico during the group stage, tallying two goals, one of which made that night's SportsCenter Top 10.

Days after helping the U.S. qualify for the 2017 FIFA U-17 World Cup, Sargent was named to Tab Ramos' final roster for the 2017 FIFA U-20 World Cup in Korea Republic. With the chance to become just the second player to appear in both U-17 and U-20 World Cup events during the same year, Sargent picked up where he left off, tallying two goals to lead the comeback in the USA's 3-3 draw with Ecuador to open proceedings in Korea.

At 17 years, 91 days, Sargent became the youngest player in U.S. history to score and just the sixth U.S. player to record a multi-goal game at the event.

Three days later, the 17-year-old was on target again, tallying what would stand as the game-winner in the 34th minute of the USA's 1-0 victory against Senegal.

Sargent then recorded the first goal in the U-20 MNT's 6-0 Round of 16 win against New Zealand. With the strike, he took his tournament total to four goals, tying Taylor Twellman (1999), Eddie Johnson (2003) and Jozy Altidore (2007) for most by a U.S. player at a single FIFA U-20 World Cup tournament. 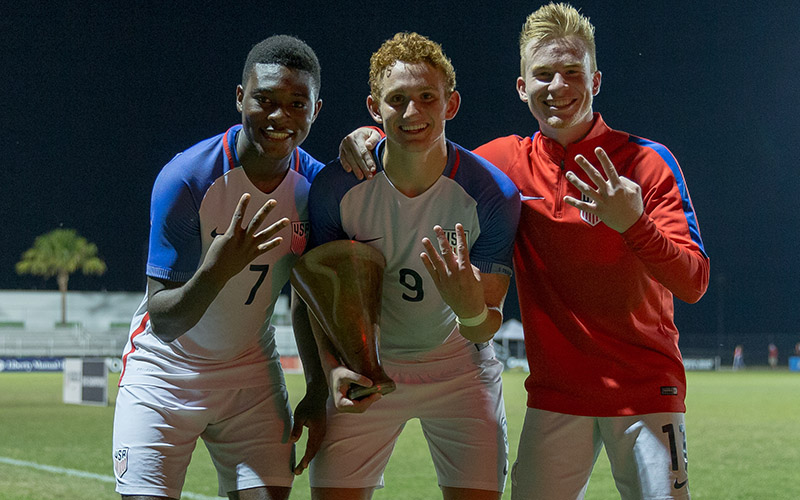 After his stellar run at the U-20 World Cup, Sargent wore the captain’s armband for the U-17s at the 2017 World Cup. He continued his impressive 2017 in India, spearheading a lethal American attack. Opening the tournament against the hosts, Sargent opened the floodgates for the USA, earning and converting a 30th minute penalty kick to put the Red, White and Blue on the board in what would become a 3-0 win. A victory in the next match against Ghana punched the Americans’ ticket to the knockout round.

The Round of 16 saw an onslaught from the USA offense, as the U-17s took down Paraguay 5-0. Sargent added a goal and assisted on a hat trick from Tim Weah as well as a score from Andrew Carleton, the other two-thirds of the U-17s dangerous attacking trio.

In the quarterfinal, the U.S. fell to eventual champion England 3-1, but Sargent’s 72nd-minute strike gave him seven career goals in Youth World Cups, tying Freddy Adu’s mark for the most in U.S. Soccer history.

Sargent is continuing to make history with his current call-up to the senior MNT’s November camp. He’s now the first player to ever to participate in the U-17, U-20 and senior MNT in the same year.

Sargent’s play for the U-17 and U-20 MNT put him on the radar for more than a few professional clubs. On Sept. 20, German club Werder Bremen officially announced their plans to sign the American teenager when he turns 18 in February 2018. During a U-17 World Cup training camp, Sargent spoke about his plans to sign with the Bundesliga club:

“I am really excited to announce that when I turn 18, I will be signing with Werder Bremen of the Bundeslig. It’s been very fun, from the very start, ever since I’ve been in Saint Louis. My coaching staff and parents have been very supportive of what I’m doing and I’m very excited to be able to sign with a team like Bremen in the near future. I think Bremen knows that day-in and day-out I’ll give it my all and do everything I can to win them a trophy.”

Sargent joins a strong contingent of young U.S. players who have started their careers in Germany, including current senior team midfielder Christian Pulisic (Borussia Dortmund) as well as the Schalke trio of Weston McKennie, Nicholas Taitague and Haji Wright (currently on loan with Sandhausen).