As he puts it, calendar year 2017 represented an “unbelievable” step in the unfolding career of Brooks Lennon.

It was one in which the speedy attacker the led the U-20 MNT with six goals while helping the side to its first CONCACAF Championship crown and a quarterfinal run at the 2017 FIFA U-20 World Cup.

On the club side, following two years working in the development setup at English Premier League side Liverpool, the Real Salt Lake Academy product got his first professional minutes when he returned to RSL on a season-long loan, helping the club in a late run that came up just short of a postseason berth.

“Coming back to RSL from qualifying and the World Cup, obviously I had a lot of confidence. I was playing a lot of soccer, and so I was ready to contribute right away. I never looked back from there,” he told ussoccer.com this week.

The 20-year-old Paradise Valley, Ariz., native will hope to continue that trajectory when he joins the U.S. Men’s National Team for its annual January Camp. Upon his arrival at the National Training Center in Carson, Calif., he’ll look to utilize the gathering to add his name to the long, extensive list of U.S. players that took the next international step with a quality showing in the early part of the year.

And as the MNT forges ahead without a trip to the World Cup on the horizon this June, Lennon also sees it as a chance for he and his generation to begin the work to get the U.S. back to the World Cup in 2022.

“The youth that is coming through makes me really excited. It’s tough to see us not qualify, but I think I’m a next generation contributor and we have a lot of guys that are so talented coming through the ranks and playing a lot for their club teams here and abroad. I definitely think it’s time for my generation to step up to the challenge and make our case with the men’s team.”

WATCH: Five Things You Should Know About the January Camp Roster

In terms of the development pipeline, Lennon is right. The January Camp roster features 12 players who have represented the U.S. at a youth World Cup, and Lennon, along with RSL teammates Justen Glad, Danny Acosta and 18-year-old Tyler Adams, is one of four who were part of the U.S. squad at last year’s U-20 tournament in Korea Republic. Recording two goals and three assists during the five matches, Lennon was among the most crucial contributors on a team that took eventual runners-up Venezuela to extra time before falling 2-1 in the quarterfinal.

While that team came up short, Lennon says the experience showed the young group of players that they are right on par with the world’s best.

“Obviously our team was very talented and we were so honed in and ready for the tournament. When we got there, we knew we could play with any country. We showed that. We were going toe-to-toe with Venezuela, who made it to the final, and we were with them the whole game. The level of play is unbelievable and we’re growing. We already feel good about what we’ve accomplished, but know there is much more out there for us.”

New Home Same as the Old One

Lennon is not only representative of the Youth National Team pipeline to the MNT, but also the U.S. Soccer Development Academy, having come through the ranks of Real Salt Lake’s residency program in Arizona before signing with Liverpool in 2015.

Moving to Merseyside at just 16, Lennon advanced from the U-16 to U-18 and eventually the U-23 side. He credited the overall experience with making him a better player, but knew his desire for first-team minutes wouldn’t come as quickly as he would have liked at Anfield, which opened the door for his season-long loan back to Real Salt Lake. 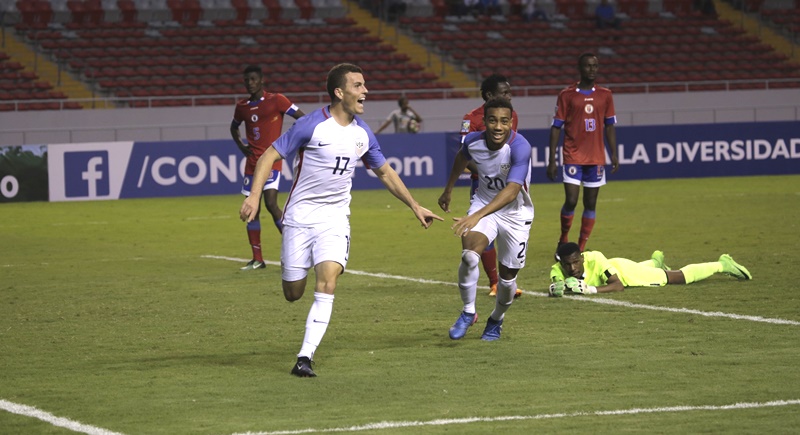 Though he missed part of the season away with the U.S. at the World Cup, Lennon delivered solid returns, adding three goals and four assists in 25 matches as RSL came up just short on the postseason. As both parties were happy with his output, Lennon inked a deal to come home on a full-time basis with hopes that it’s the start of making him a long-time member of the club, similar to teammates and MNT veterans Nick Rimando and Kyle Beckerman.

“Those are two guys I really look up to at RSL and with the U.S.,” Lennon said. “They’ve both been to a World Cup, they won MLS Cup, and that’s what I’m aspiring to and what I dream of. That’s something I want to do, it’s one of my goals. Those guys have done it. I always try and pick their brains and get little things here and there that I can improve and work on.”

Lennon is one of 10 players coming to Carson who will experience MNT camp for the first time. He’s one of 15 who hopes to earn their first cap when the U.S. takes on Bosnia and Herzegovina on Jan. 28 at StubHub Center [9:30 p.m. ET | FS1 and UniMas].

But before the thought of a senior team debut creeps too far in, he recognizes the need to get down to work as he takes his first opportunity.

“I’m just excited to meet everyone, see all the guys and meet the coaching staff. Beyond that, I just want to get out there again and start playing. That’s what we’re going for. I know there’s a lot to look forward to and it’s a long camp, but I’m itching to get out on the field and obviously play with these guys and show everyone what I’ve got. The rest will take care of itself.”