Five Things to Know About the 2018 SheBelieves Cup

From March 1-7, 2018, U.S. Soccer will host the third annual SheBelieves Cup, the most elite four-team international women’s soccer tournament of the year. The USA will once again welcome back women’s soccer powers Germany, France and England. Here are five things to know about the 2018 SheBelieves Cup.

The Best of the Best
Just like the last two years, the four participants in the SheBelieves Cup are among the top women’s soccer countries in the world, with the teams all sitting in the Top-10 of the current FIFA Women’s World Rankings. The USA, the reigning Women’s World Cup champions, is first. Germany, the reigning Olympic champion, is second. England is third and France is sixth.

Schedule Format and How to Watch
The tournament format will be the same as the last two years with the four teams participating in three doubleheader events at three different venues over a seven-day period.

The tournament begins with England opening against France on Thursday, March 1 at MAPFRE Stadium (4 p.m. ET; ESPN3), followed by the USA vs. Germany (7 p.m. ET on ESPN2, ESPN3) in a battle of the defending World Cup and Olympic champions. All the teams will then travel to New Jersey and Red Bull Arena where the USA will play the first match of the day on Sunday, March 4, taking on France (12 p.m. ET on ESPN2, ESPN3) followed by Germany vs. England (3 p.m. ET; ESPN3). The tournament will finish on Wednesday, March 7, at Orlando City Stadium in Orlando, Florida, as France takes on Germany (4 p.m. ET; ESPN3) followed by the tournament finale featuring the USA against England (7 p.m. ET on ESPNews, ESPN3). All games will also be available on the ESPN app.

Slim Margins at Previous SheBelieves Cup
In the 2016 SheBelieves Cup, the USA defeated England and France by 1-0 scores and downed Germany, 2-1, in the de facto championship game to take the inaugural tournament title. Germany finished second, England was third and France was fourth. In fact, none of the games were decided by more than one goal with the results coming down to three 1-0 victories, two 2-1 victories and one 0-0 draw.

In last year’s SheBelieve Cup, the USA defeated Germany 1-0 in the opening match on a goal from Lynn Williams, but fell to England 1-0 and France 3-0. France won the tournament, Germany was second, England third and the USA finished fourth. France defeated England 2-1, drew 0-0 with Germany and downed the USA, 3-0. That match was the first and thus far only game of the 12 contested in the two-year tournament history that has been decided by more than one goal.

The Best Players in the World
Probably the most exciting thing about the SheBelieves Cup, not only for teams and players but also for fans in the United States, is that the tournament provides the opportunity to watch some of the most talented women’s players on the planet. 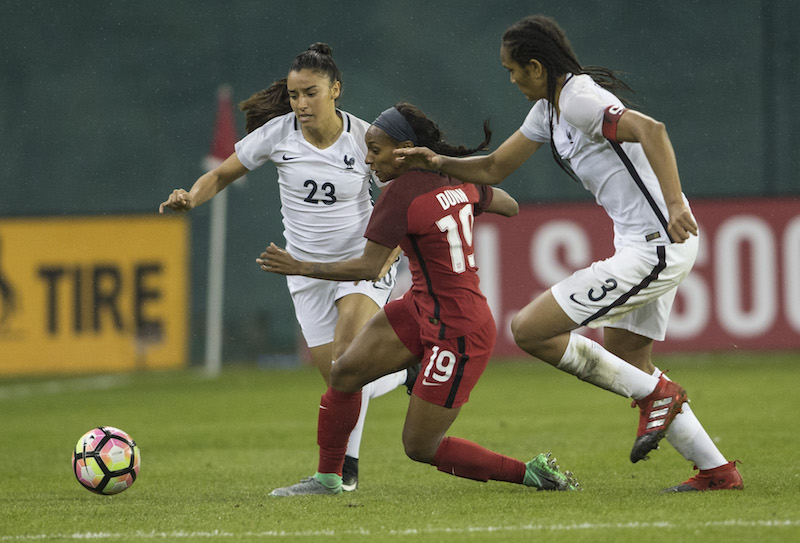 This includes not only the U.S. players, like 2015 and 2016 FIFA Women’s Player of the Year Carli Lloyd, or prolific goal scorer Alex Morgan, but also forward Eugenie Le Sommer and Wendy Renard of France; thundering Germany forward Alexandra Popp and superbly creative midfielder Dzsenifer Marozsan and England defender Stephanie Houghton and attacking midfielder Fara Williams – all considered among the best in the world at their respective positions – just to name a few.
Tags
WNT
2018 SheBelieves Cup
U.S. WNT vs. Germany - 03/02/2018
U.S. WNT vs. France - 03/04/2018
U.S. WNT vs. England - 03/08/2018
5 Things 2 Know