Alyssa Naeher Settles In As No. 1

A “creature of habit” is how U.S. WNT goalkeeper Alyssa Naeher is described by Julie Ertz, her teammate for club and country.

Naeher has a routine that she sticks to almost every morning while on the road with the U.S. WNT. She gets up early in the morning (almost always earlier than any of her teammates), eats some breakfast, grabs a cup of coffee, goes for a walk and sits down to complete a crossword puzzle. It’s a simple routine, but it fits her personality perfectly. She is quiet and calm, but always confident and in control. Those are qualities that provide a sense of confidence to every player around her, on and off the field.

“Who she is off the field, is what you get on the field,” Ertz said. “She has a routine and knows herself really well. She’s so true to herself that she’s so predictable, in like the greatest and most refreshing of ways. You know that she’s going to be doing crossword puzzles, you know she’s going to be at a coffee shop. That’s the real her. She won’t change. She’s also a very loyal friend and that is super comforting to you on the field. I trust her no matter what.” 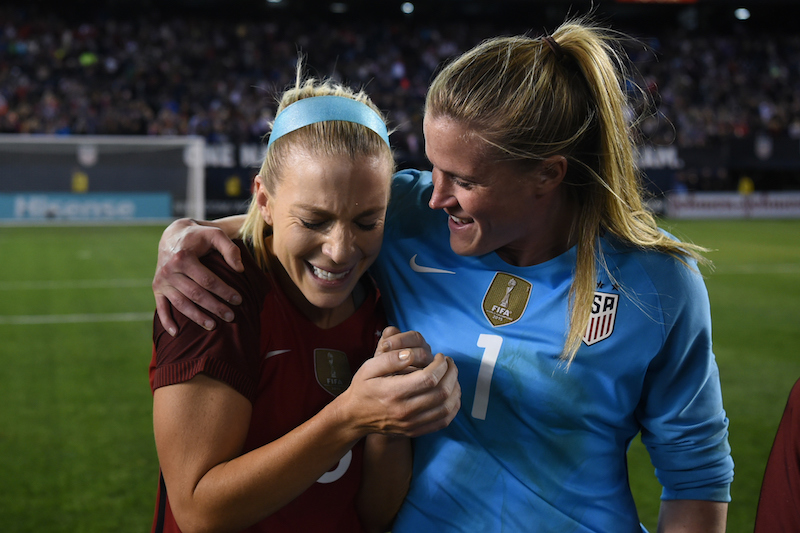 Ertz and Naeher play together on the U.S. WNT and the NWSL's Chicago Red Stars

The trust she inspires in her teammates is one of the reasons she is qualified to take on one of the most important roles within the WNT – starting goalkeeper.

One of the themes that U.S. WNT head coach Jill Ellis has been pleased to see running through the team this year is focus. And for a goalkeeper, focus is one of the most crucial aspects of their game.

Even when the ball is on the opposite end, or when no shots or threats of goals are coming their way, a goalkeeper must continue to stay alert and locked into everything happening on the field. They need to read the game and anticipate what may be coming. It’s a difficult job and the pressure is high, so few are wired to be able to excel in the position at the elite levels. Naeher manages this incredibly well.

“The more games she plays and the more experience she gets, she continues to grow in confidence as a goalkeeper,” Ertz said. “She’s very intelligent in the way she approaches the game. From just seeing the ‘keepers in general and how much work they do and how much film they watch and how much attention to detail they have, Alyssa shows up every day and puts in the work.

“When you have someone like her behind you, her mentality and presence gives you confidence as a defender. She reacts to situations quickly and fiercely, and comes up huge in big moments.” 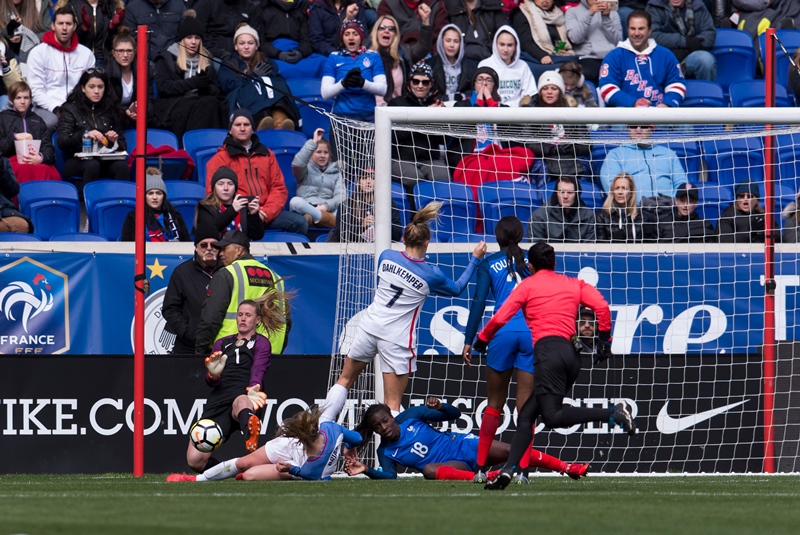 Alyssa Naeher Makes a Big Save vs. France on March 4

Several of those moments came on March 4 against France during the WNT’s second game at the 2018 SheBelieves Cup. Late in the game and with the scored tied at 1-1, Naeher made a pair of excellent saves from close range to maintain the draw and help the U.S. earn a point, giving the USA a chance to win the tournament in its final match against England.

The draw gave the WNT four points at the SheBelieves Cup after two games. The first match was a 1-0 win against Germany on March 1, Naeher’s 13th career shutout. England, which had also won its first game 4-1 against France on Thursday, drew 2-2 with in its second match, thus making the USA vs. England matchup on Wednesday night in Orlando a much-anticipated defacto championship game.

“Being in this position, it’s a good experience for all of us,” Naeher said. “It’s got that tournament feel and it’s what we need going forward to see how can we grow in these moments and be prepared for it.”

Despite only having 26 caps, Naeher is a veteran in this WNT squad. A 2015 Women’s World Cup champion and a 2016 Olympian, many of the young and newer players on the squad look up to her. She’s clear in her expectations and works hard, two attributes of good leaders. 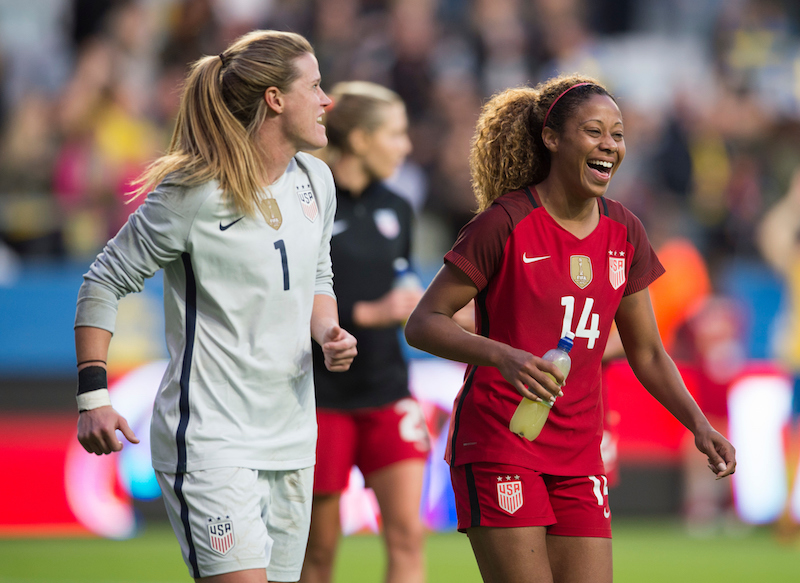 Casey Short shares a laugh with Naeher after a WNT game

“I just started playing with Alyssa a couple years ago but it’s been an honor to play with her for both the Red Stars and the National Team,” U.S. WNT defender Casey Short said. “I knew she was a world class ‘keeper and she’s so good at directing the backline while being extremely reliable. Off the field, she’s humble, very caring and goes above and beyond for everyone around her. It’s been awesome to see her step into the starting role and see how her confidence has grown.”

“She isn’t going to talk your ear off,” Ertz said. “She’s going to delegate and tell you exactly what she needs and wants and expects from you. Sometimes that’s all you really need.”