Following its visit to Mexico City, FIFA’s 2026 Bid Evaluation Task Force continued its technical tour of the United Bid of Canada, Mexico, and the United States with a stop on Wednesday in Atlanta —the second of four United Bid Candidate Host Cities that the Task Force will visit and evaluate during their trip.

The first stop on the technical tour was a site visit of the Children’s Healthcare of Atlanta United Training Facility. Designed to foster openness and an aspirational environment, this 33-acre facility features a 30,000 square-foot headquarter building and six full-size fields including - three natural grass and three FieldTurf surfaces.

With the headquarters facing towards the fields so academy players, front office employees and first team players can feel connected and focused on the club - Children’s Healthcare of Atlanta United Training Facility promotes unity, further reinforcing the choice to include it as an option for a training facility in our United Bid proposal.

Following the tour of the Children’s Healthcare of Atlanta United Training Facility, the Task Force headed to the Mercedes-Benz Stadium, the most sustainable sports venue in the world and the official home of Major League Soccer side Atlanta United FC. The stadium, which is the first professional sports stadium in North America to achieve LEED Platinum certification, features an impressive 42,500-seat soccer configuration which has the capability to expand even further to house over 70,000 fans.

It was due to this cutting-edge design, that Atlanta United was able to break Major League Soccer's single-match attendance record on October 22nd, 2017 when they housed 71,874 for their regular season match against Toronto FC. The club then broke that mark this season, welcoming 72,035 supporters for its home opener against D.C. United on March 11, 2018. 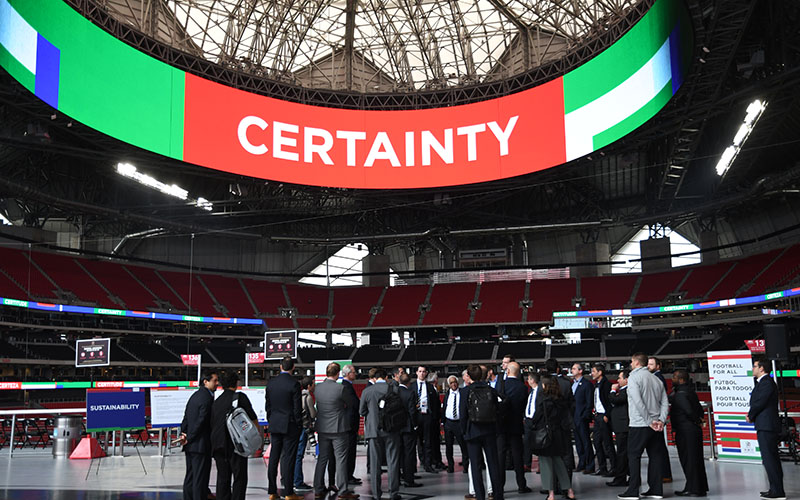 The last stop on our tour was the Georgia World Congress Center, which opened its doors in 1976 with approximately 350,000-square-feet of exhibit space. Today, the Center features 1.4 million square-feet of exhibit space, making it the fourth-largest convention center in the United States. The Center has also been home to the International Broadcast Center and was used by the GWCC to host seven Olympic-sporting events in 1996.

During today’s tour in Atlanta, the United Bid Committee’s focus on Unity across the three nations was on display. Here are some of the highlights: