U.S. WNT Hosts Australia, Brazil and Japan this Summer for 2018 Tournament of Nations

CHICAGO (May 16, 2018) – After hosting the 2018 SheBelieves Cup in early March, a tournament won by the USA, U.S. Soccer will stage its second elite four-team women’s international tournament of the year as Children’s Mercy Park in Kansas City, Kan., Pratt & Whitney Stadium at Rentschler Field in East Hartford, Conn., and Toyota Park in Bridgeview, Ill., play host to the USA, Australia, Brazil and Japan for the 2018 Tournament of Nations.

The competition format is the same as the SheBelieves Cup and last year’s Tournament of Nations with the four teams each participating in three doubleheader events at three different venues over an eight-day period.

The match days will see Brazil open against Australia on Thursday, July 26, at Children’s Mercy Park (3:15 p.m. CT), followed by the USA against Japan (6 p.m. CT on FS1). All the teams will then travel to East Hartford where Japan will face Brazil on Sunday, July 29 (4:15 p.m. ET) followed by the USA taking on Australia (7 p.m. ET on FS1) at Pratt & Whitney Stadium at Rentschler Field. The tournament will finish on Thursday, Aug. 2, at Toyota Park as Australia faces Japan (4:45 p.m. CT) and the USA tackles Brazil (7:30 p.m. CT on FS1). 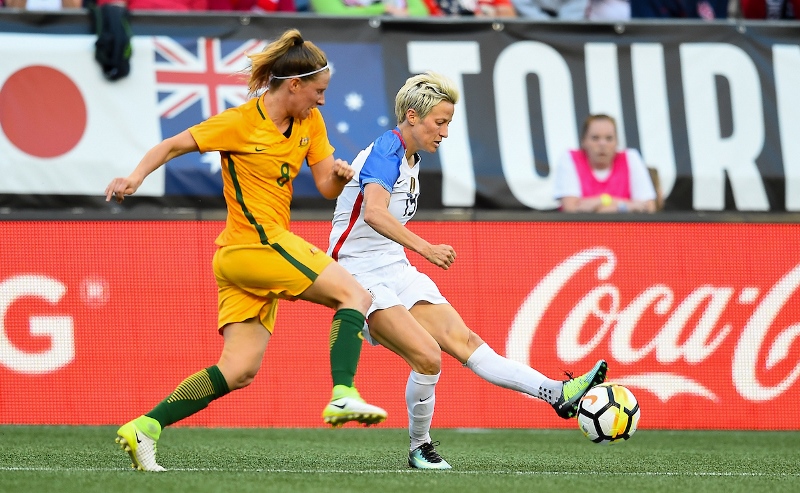 The winner of the tournament will be based on total points (three for a win, one for a tie), with the first tie-breaker being overall goal difference, followed by most total tournament goals scored, then head-to-head result and, lastly, FIFA Ranking if necessary.

FOX Sports, home of the 2019 FIFA Women’s World Cup, will present live coverage of the USA’s Tournament of Nations matches on FS1. Games will also be available via FOXSports.com and through the FOX Now and FOX Sports GO apps on iOS and Android, as well as internet-connected devices, including Apple TV, Android TV, FireTV, Roku, Chromecast and Xbox One.

Australia, Brazil and Japan have all recently qualified for the 2019 FIFA Women’s World Cup in France through their Confederation tournaments that were staged in April. The USA will play for its World Cup berth when it hosts the 2018 Concacaf Women’s Championship in October. The U.S. is currently ranked first in the world, Australia is sixth, Brazil is eighth and Japan is eleventh. The next set of FIFA rankings comes out in June.

SAID U.S. HEAD COACH JILL ELLIS:
“Hosting world class teams in both the SheBelieves Cup and the Tournament of Nations is exactly what we need to test ourselves and to compete to get on the top of a podium. Friendlies are important, but there’s nothing like the competitive format these tournaments provide us. Australia, Brazil and Japan are three very different teams that challenge us with their respective styles and personnel and it will be another fantastic tournament for our fans to watch.”

BUY TICKETS
Tickets for all three doubleheaders go on sale to the public Friday, June 1 at 10 a.m. local time through ussoccer.com. For the games in Kansas City and Chicago, tickets are also available via phone at 1-800-745-3000. For the game in Hartford, tickets are available via phone at 1-877-522-8499 (8 a.m. to 10 p.m. ET only) and at the XL Center ticket office starting Monday, June 4 (open Monday-Friday, 12 p.m. to 5 p.m.). [Note: Tickets are not sold at any of the three stadium ticket offices except on the day of the event.] Groups of 20 or more can order at ussoccer.com.

Tournament of Nations VIP Packages (special packages that include a premium ticket, tournament t-shirt and scarf, access to the field before the game, and other unique benefits) are also available exclusively through ussoccer.com.

GIRLS FANTASY CAMP
U.S. Soccer will offer a four-day Girls Fantasy Camp around the matches in Kansas City, running from July 24-27. The camp is open to girls born in 2004, 2005 and 2006. This exclusive opportunity includes training sessions with former Women’s National Team stars Lindsay Tarpley and Lori Lindsey at U.S. Soccer's National Development Center, VIP match tickets, behind-the-scenes access, field-level access to watch warm-ups, personalized U.S. Soccer jersey and training apparel, hotel accommodations and all meals, ground transportation and more. The Fantasy Camp is a fundraiser to support the U.S. Soccer Development Fund and includes a special tax-deductible donation. Space is very limited for the camp and filled on a first-come, first-serve basis. For more information and to register, visit ussoccer.com/fantasycamp .

DID YOU KNOW…
This will be the second edition of the Tournament of Nations after last year’s competition, which featured the same four teams and was won by Australia. The USA finished second, Japan was third and Brazil fourth.

By bringing these three elite women’s soccer nations to the United States, the tournament continues to shine a spotlight on the growing competitive stature of the women’s game and its ability to create connections across geography and culture. This tournament will celebrate some of the world’s premier women’s soccer players, many of whom compete in the National Women’s Soccer League (NWSL). There are currently 10 Australian players, seven Brazilian players and four Japanese players in the NWSL.

Most of these players will be on the world stage next summer in France. Australia and Japan qualified for the 2019 FIFA Women’s World Cup by finishing first and second, respectively, in Group B at the 2018 AFC Asian Cup in Jordan. The two countries tied 1-1 in group play and both teams won their semifinal matches, Australia over Thailand in penalty kicks after a 2-2 tie in regulation and Japan over China, 3-1, setting up a rematch in the championship game. Japan came out victorious, 1-0, on an 84th minute strike from Kumi Yokoyama.

Brazil qualified by finishing in first place in the final stage of the 2018 Copa América Femenina in Chile. Brazil won all four of its opening-round games by a 22-1 goal margin to advance to the four-team final stage where it beat Chile (3-1), Argentina (3-0) and Colombia (3-0). In front of large home crowds, Chile finished second in the final stage group to also qualify for France, while Argentina finished third and will face the fourth-place finisher from the 2018 Concacaf Women’s Championship in a two-game playoff for a final World Cup berth.

U.S. Soccer plans to host the Tournament of Nations every summer during years that do not feature a World Cup or Olympic Games, meaning the next edition would be staged in 2021.