The January Camp has been a U.S. Men’s National Team staple for more than 20 years. The list of future MNT contributors – almost all coming from MLS -- that have utilized the month-long gathering to jumpstart their international careers is a long one, with nearly every edition producing at least one player that has carved out a significant place in the squad.

A veteran of every January Camp since 2015, midfielder Wil Trapp earned caps that year and in 2016, but came to the forefront in 2018 as he utilized the gathering to establish himself as a leader among a young group of MNT players. The Columbus Crew SC captain went on to earn his first start last January against Bosnia and Herzegovina, a game that propelled him to a team-leading nine appearances on the year. 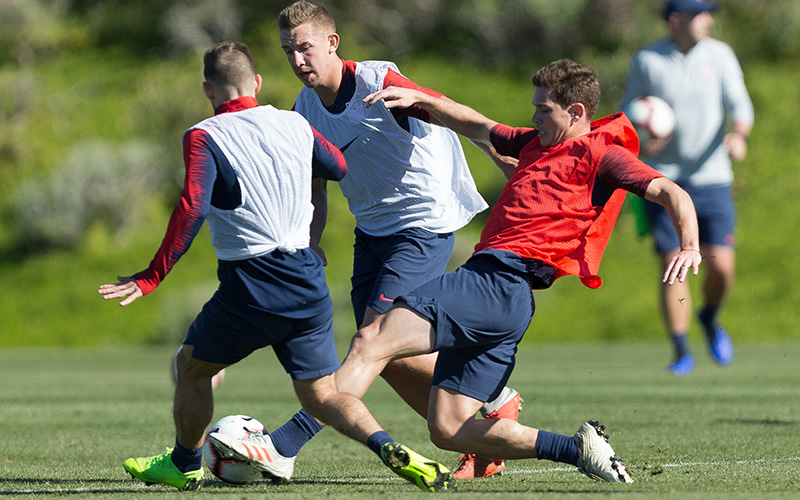 “It’s a timely camp in terms of where MLS guys are with the start of their preseason coming,” Trapp, pictured above, said of the camp’s value. “It’s really a time for coaches to be able to see guys for an extended period of time and just see players and how they interact with their teammates and perform every single day in what is more like a club environment. It sets a good precedent and stage for what these guys will be like in possible future camps.”

Just 23 years old, Kellyn Acosta’s cap number matches his age and places him behind only Michael Bradley and fellow January Camp alum Gyasi Zardes as the third-most seasoned player on the current roster. The Colorado Rapids midfielder made his first MNT camp appearance in January 2016, debuted later that month in a 3-2 win against Iceland and progressed to making his first World Cup Qualifying appearance eight months later.

“You train and play with the best guys around the league, seeing how you compare, and obviously just getting more and more comfortable,” Acosta said. “I know in my first camp I was kind of uncomfortable at first. I didn’t know a lot of the players because I was the young guy, but the time I spent in that camp helped establish myself and helped me build for future competitions.”

New Experience For Everyone

Eight players on this year’s roster are in the midst of their first MNT camp, while 13 will hope to mirror what Acosta and Trapp have done by gaining their first senior-team appearance at the end of the month. Any way you slice it, the current camp is a new experience for every player on the 28-man roster, as they get better acquainted with new MNT head coach Gregg Berhalter’s style and expectations.

One of three players on the squad to have worked under Berhalter in Columbus, Trapp is more familiar with the training sessions -- which are high energy and full of teaching moments.

“My first impressions from guys is the level of professionalism and energy is excellent and it’s really permeating into the group,” Trapp said. “It’s also a time where we’re building something new, so there will be a learning curve and I think that’s necessary and exciting for this young group to step into with a new staff. It’s something that’s different than what we’ve experienced at the National Team level or with our clubs.”

Known for being vocal in his playing days, Berhalter carries the same trait when guiding training. Another noticeable aspect is the omnipresence of his whiteboard. Carrying it under his arm to and from training every day, Berhalter writes out the principles the team will work on in each session and uses magnetic pieces to demonstrate the movements he wants to see during drills. 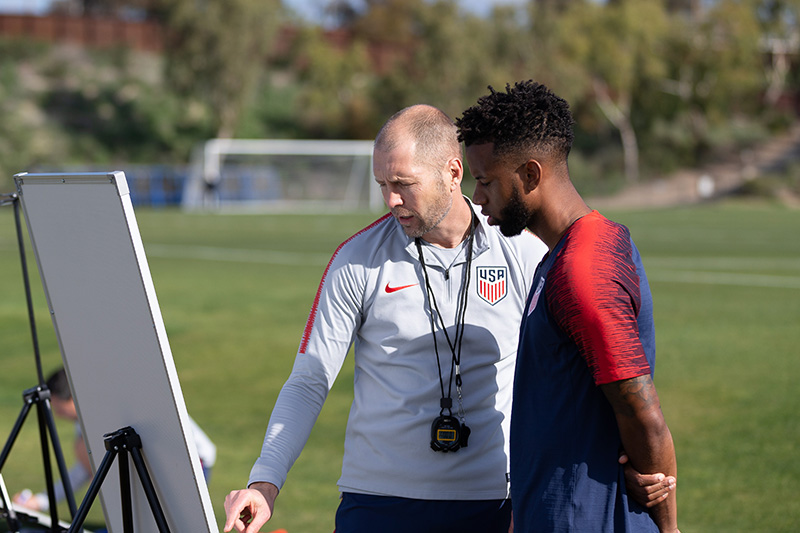 “The whiteboard on the field is a new thing for me,” Acosta said. “I think it’s just a way for him to put his thoughts and relay them to us. It’s interesting to see things in writing or the mini field he has on the board, and then immediately work to translate that on the field.”

“I’ve grown to know this whiteboard quite well,” added Trapp. “Gregg loves to be able to point things out on the field, but also explain and show it via another type of medium. That whiteboard goes a long way with guys being able to visualize before we step into a drill or a game where exactly the movements are, because it’s a very positional game. It’s fair to say he knows what he wants out of sessions and exercises, and that whiteboard is a big part of it for sure.”

The heavy work rate and high amount of instruction is working hand-in-hand with the focused environment the team is living in at the Chula Vista Elite Athlete Training Center the next couple weeks. Most of the down time the players have had during the first week has been utilized for rest, and that seems to be just fine with players who are getting back into things and learning a new system.

“We have a job here,” Acosta said. “With the last year or two and stuff that has gone on, for us to buckle down, focus and learn this with a new coach for a few weeks is hugely beneficial for all of us. We need to push the program in the right direction, and I think the work we’re doing here is going to help us lay a good foundation to move forward.”