USA Rallies for 3-2 Comeback Win vs. Canada in Concacaf U-17 Championship Opener

BRADENTON, Fla. (May 2, 2019)—The U.S. Under-17 Men’s National Team came from two down to defeat Canada 3-2 in its opening match of the 2019 Concacaf U-17 Championship. While two quick-strike goals gave Canada a lead at halftime, the USA roared back in the second frame, rallying with three unanswered goals from Gianluca Busio, Axel Aljandre and Gio Reyna to start World Cup qualifying with three points in Group F.

The USA controlled the pace of play in the early-going, putting pressure on Canada from the opening whistle. Despite conceding much of the ball to the USA, Canada broke the game open with two transition goals in two minutes from Jérémie Omeonga and Jacen Russel-Rowe halfway through the opening 45 minutes.

Down 2-0, the USA pushed hard to get back in the game right out of the gate in the second-half. Reyna stormed up the right wing in the 49th minute before sending a cross into the box for Busio, who one-timed it back across goal and inside the far post to put the U.S. on the board. 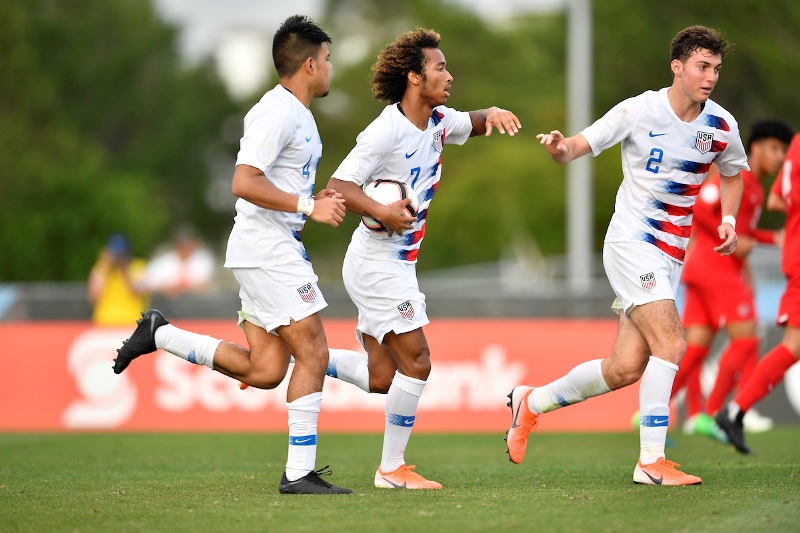 After earning an abundance of corner kicks in the first hour of play, the USA earned the equalizer on its eighth corner of the game in the 63rd minute. Kobe Hernandez met the service after it trickled out past the 18-yard-line and hit a low drive into traffic. The shot deflected off a Canada defender and fell to Alejandre, who smashed it over the goalkeeper from close range to tie the match at 2-2. It marked Alejandre’s first goal for the U-17 MNT in his 15th appearance.

The USA completed its comeback just six minutes later. Reyna was fouled just outside the box in the 69th and lined up to take the free kick. With a screen set by his teammates, Reyna guided his shot into the far side of the net after Canada goalkeeper Marc Kouadio took a false step and couldn’t recover.

The U.S. did well in attempting to kill of the game by possessing the game, but Canada was able to carve out a few late opportunities, hitting the crossbar in the first minute of stoppage time, and testing U.S. keeper Damian Las with a rising shot toward the right corner with the final kick of the game.

The result moves the USA to 8-1-0 against Canada all-time at this competition. It’s the 38th game in which the U.S. has scored three or more goals at the tournament.

Next up, the USA takes on Barbados in its second Group F game at 4 p.m. ET on Concacaf Facebook and Univision Deportes Network. The top three teams from Group F will advance to the knockout phase Round of 16.

Goal Scoring Rundown:
CAN – Jérémie Omeonga (Matthew Catavolo), 21st minute: On a jailbreak run up the field, Omeonga sent the ball to Jacen Russel-Rowe, who deftly controlled it with his chest before laying it off for Catavolo at the top corner of the box. He looped a cross to Omeonga at the far post where his header tucked between the post and goalkeeper Damian Las for the game’s opening goal. USA 0, CAN 1

CAN – Jacen Russel-Rowe (Matthew Catavolo), 22nd minute: Another transition moment sparked Canada’s second goal in as many minutes. Catavolo dribbled up field before dishing to Russle-Rowe on the 18-yard-line. From there, he cut inside and launched a curling, pin-point shot into the top right corner of the net. USA 0, CAN 2

USA – Gianluca Busio (Gio Reyna), 49th minute: Reyna thundered up the right wing as Canada’s defenders closed in. He did well to open enough space for a cross to Busio, who was stationed just outside the six-yard box. With impressive skill, Busio one-timed a volley past the ‘keeper into the far-side netting to launch the USA’s comeback effort. USA 1, CAN 2

USA – Axel Alejandre, 63rd minute: The USA earned plenty of corners and dangerous free kicks in the run of play, but finally converted when a corner failed to connect with anyone in the box. The ball trickled out beyond the 18-yard-line where Kobe Hernandez struck a low half-volley towards goal that was deflected by Canada to the feet of Alejandre on the back post. The U.S. center back smashed it over the head of the ‘keeper for the equalizer. USA 2, CAN 2

USA – Gio Reyna, 69th minute: Reyna earned a free kick just outside the 18-yard-line and lined up to take it himself with three teammates setting a screen in front of the ball. As the USA attackers scattered throughout the box, Reyna hit a dipping shot that wrong-footed the goalkeeper inside the far post for the game-winning goal. USA 3, CAN 2 FINAL