Five Things to Know About the 2017 CONCACAF Beach Soccer Championship

The U.S. Beach National Team is currently in Nassau, Bahamas competing at the 2017 CONCACAF Beach Soccer Championship. While the team gets ready to take on Trinidad and Tobago in their Group C finale Thursday (8 p.m. ET; UDN, CONCACAF Facebook) here are five things to know about CONCACAF’s Beach World Cup qualifying tournament.

The CONCACAF Beach Soccer Championship is the regional championship for beach soccer in North America, Central America, and the Caribbean. The tournament serves as CONCACAF’s regional qualifying tournament for the FIFA Beach Soccer World Cup, with the 2017 edition taking place from April 27-May 7 in Nassau, Bahamas.

Beginning in 2005, qualifying for the Beach Soccer World Cup was a combined event between North and South America, but following the 2007 edition, CONCACAF has hosted its own Beach Soccer qualifying tournament.

The USA and Mexico are the only two countries that have qualified for every edition of the tournament (joint and separate), while Costa Rica has only missed the 2005 edition.

The format of the CONCACAF Beach Soccer Championship begins with 16 teams divided into four, four-team groups. The top two finishers from each group advance to the knockout stage, where the two finalists join World Cup hosts, the Bahamas as CONCACAF’s three representatives to the 2017 FIFA Beach Soccer World Cup. Should the Bahamas or non-FIFA member Guadeloupe advance to the final, the next highest finisher would earn the spot or spots.

Team USA brought an experienced squad to the tournament and has found its groove early, using a Nick Perera hat trick to defeat U.S. Virgin Island 8-1 (Feb. 20) before a brace from Lewie Valentine led them past Antigua and Barbuda 7-2 (Feb. 22).

The U.S. Beach team currently sits atop Group C as they take on second place Trinidad & Tobago in their group finale on Feb. 23. The U.S. and Trinidad & Tobago have both accumulated six points, but the USA sits in first place by virtue of a superior goal differential. With both teams already qualified for the Knockout Round, Thursday’s match will determine which team advances in first place of Group C. 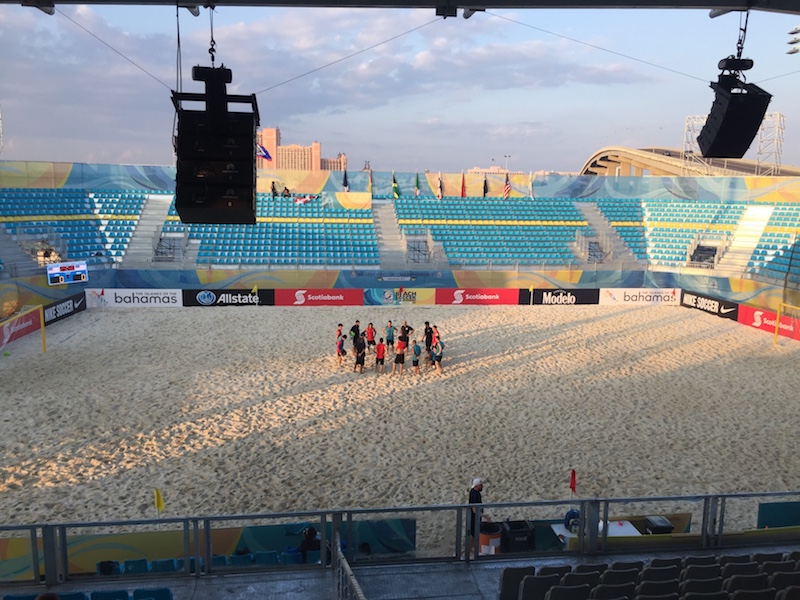 While the U.S. Beach squad is a top contender, they’ll have to get through some serious competition to qualify for the 2017 World Cup. Tournament host, Bahamas, has won all three matches in their group. Although they have already automatically qualified for the World Cup as hosts, the Baha Boyz will be on the hunt for their first CONCACAF Beach Soccer Championship title.

Group B includes three-time winners and defending champions Mexico and 2006 runners-up Canada. Meanwhile, Group D contains two of CONCACAF’s heavy hitters. El Salvador and Costa Rica are ranked second and fourth for the region according to the overall world rankings and are favorites to progress in the tournament.

The U.S. takes on Trinidad & Tobago to close out group play on Feb. 23 at 8 p.m. ET. Fans can watch this match and every other match of the tournament live on CONCACAF’s Facebook page and TV on UDN.

The knockout round and placement matches kick off on Feb. 24, with the tournament final set for Sunday, Feb. 26.