Five Things to Know About the Germany SheBelieves Cup Roster

Germany announced its 2017 SheBelieves Cup roster on Feb. 14, while England revealed its 23-player squad on Feb. 21. This means that France will soon follow suit.

As for the USA, head coach Jill Ellis announced a 25-player pre-tournament training camp roster on Feb. 8 and will name the final 23-woman roster closer to the start of the tournament.

As Germany was first out of the gate, here are five things to know about the roster that will represent the current Olympic champions in the U.S. from March 1-7.

For the first time in more than a decade, Germany will have a new coach roaming the sidelines. Steffi Jones, a legendary international player and 2003 Women’s World Cup champion, has replaced Silvia Neid – also a legend as a player and a coach – as the head coach of the Germany Women’s National Team. Neid, who took the positon in 2005, finished her highly successful 11-year tenure by winning the gold medal at the 2016 Olympics. She also won the 2007 Women’s World Cup and the 2008 Olympic bronze medal. She was named the FIFA Women’s World Coach of the Year in 2010, 2013 and 2016. Neid has transitioned into a player development position with the DFB. 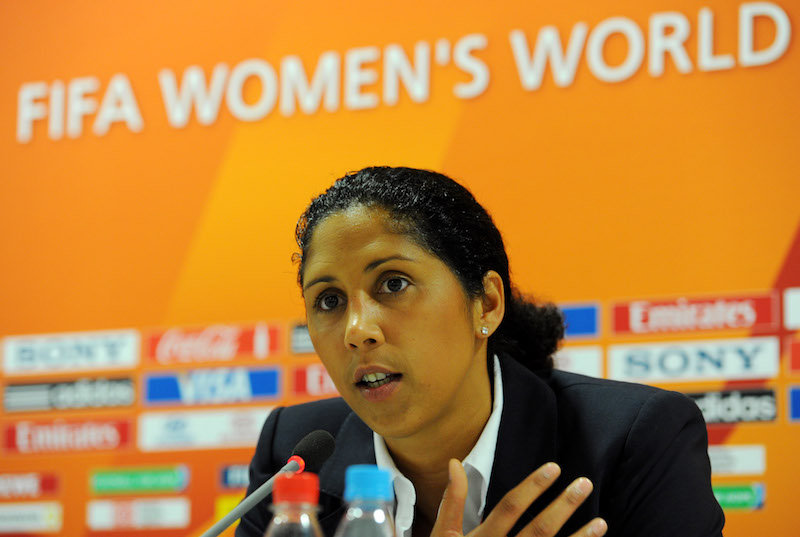 Jones received much praise for her work as president of the organizing committee for the 2011 FIFA Women’s World Cup in Germany. It was a ground-breaking event for women’s soccer and especially women’s soccer in Europe. As a player, Jones played the majority of her career for her hometown FFC Frankfurt team, but also played in the USA with the Washington Freedom in 2002-2003, helping the club to the championship in 2003. Jones is a dual German and American citizen as she is the daughter of a German mother and an American father. Germany has yet to lose under Jones, winning four games (including two Euro qualifiers and two friendly matches) and drawing one so far, a 1-1 tie with Norway in a friendly on Nov. 29, 2016 in Germany’s most recent match.

After the retirement of legendary goalkeeper and captain Nadine Angerer, the 2013 FIFA Women’s Player of the Year, Germany has been looking for her successor. Angerer was the first goalkeeper, male or female, to win the award, and as a two-time FIFA Women’s World champion she leaves some big shoes to fill. Angerer, who is currently on the coaching staff for the Portland Thorns in the NWSL, retired from international play in late 2015, but Germany has some excellent young net-minders coming up. 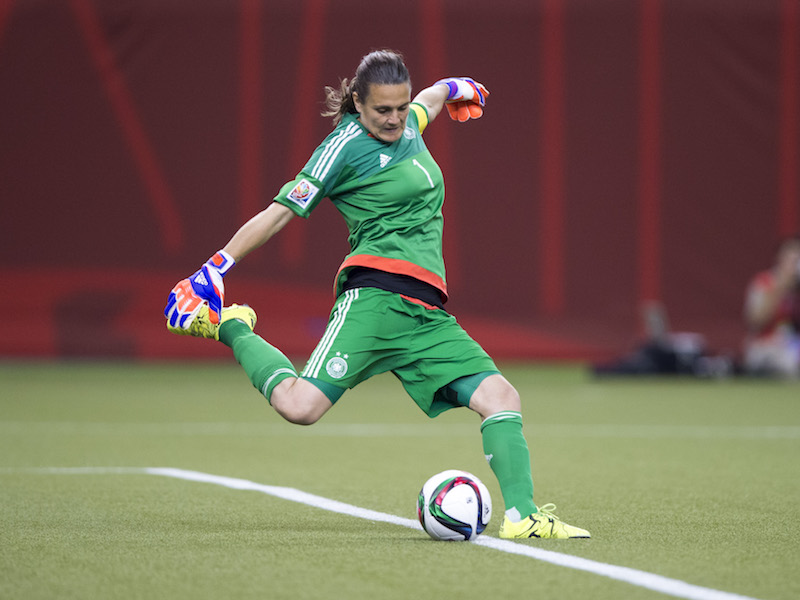 Twenty-six-year-old Laura Schult has been getting most of the caps. She back-stopped Germany to the 2010 FIFA U-20 Women’s World Cup title on home soil and was in goal for both the 2016 SheBelieves Cup and Germany’s 2016 Olympic gold-medal run, where she only allowed five goals in six matches. In her 38 caps, Schult has amassed a 32-3-3 record. She is being pushed by both 24-year-old Laura Benkarth, who played against the USA in the final of the 2012 FIFA Under-20 Women’s World Cup in Japan (along with three other players on the German roster), and 29-year-old veteran Lisa Weiss. Both have played three times for the senior side.

The Germany roster includes a plethora of talent, but perhaps no one is more lethal than striker Anja Mittag. Mittag has played 149 times for her country and has scored 49 goals. She is tall, fast, strong, determined and has a knack for finishing goals from difficult spots. Mittag comes into SheBelieves as the most experienced player on the roster who throughout her 149 games has been part of 111 wins for Germany, 20 draws and only 18 losses. She scored five goals at the 2015 Women’s World Cup in Canada, including a hat trick in Germany’s opening match vs. Ivory Coast.

Mittag started all three games at the 2016 SheBelieves Cup and scored the first goal of the game in the de facto final against the United States on March 9. Despite not scoring at the 2016 Olympics, Mittag started every game and was a crucial piece of the team’s run to its first Olympic gold medal. 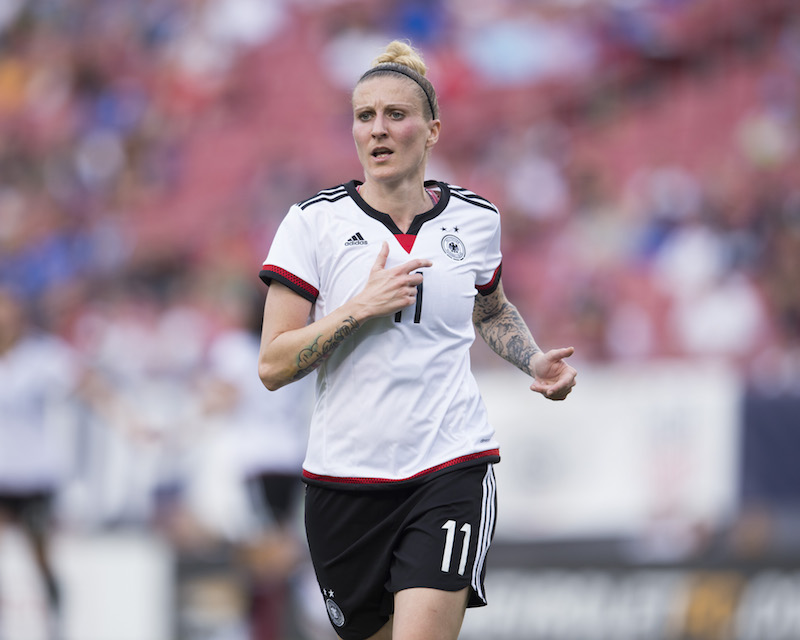 Besides Angerer’s retirement, in the past two years Germany has also said farewell to veterans Célia Šašić, Melanie Behringer and Saskia Bartusiak, all integral members of Germany’s success in the last decade. But just like the USA’s infusion of young and new talent, Germany has welcomed tremendously talented youngsters Pauline Bremer, Sara Däbritz, Leonie Maier, Dzsenifer Marozsan, Alexandra Popp and Lena Petermann – all players born in or after 1991, who have quickly established themselves as a powerful group in the new era of Germany women’s soccer. Popp and Marozsan were two of the stars on Germany’s team that won the 2010 FIFA U-20 women’s World Cup at home. Popp won the Golden Boot in that tournament, scoring 10 goals, and was the tournament MVP.

Bremer, who is 20 years old, has played for Germany since she was part of its U-15 WNT. For the senior team, she has seen action in 11 games and has already scored three goals, a solid ratio for a defender. 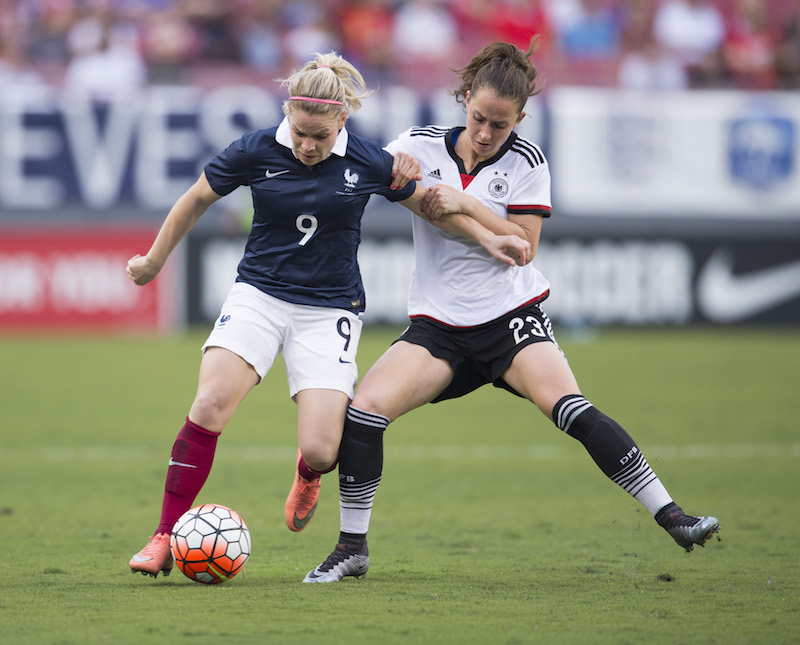 Däbritz battles for the ball with France’s Eugenie Le Sommer

Twenty-two-year-old Däbritz played in two games at last year’s SheBelieves Cup and was part of the German team at the 2015 Women’s World Cup and the 2016 Olympic Games. She scored two goals at the World Cup and three goals at the Olympics, one in Germany’s opening game against Zimbabwe, one in its second game against Australia, and one in Germany’s 2-0 semifinal win against Canada. Overall, she has 38 caps with Germany (32 of those are wins), and has scored eight international goals, five coming at major tournaments.

Peterman, who is 23 years old, led Germany to the title at the 2014 FIFA U-20 Women’s World Cup and is one of five players on the German roster for the SheBelieves Cup who played on that team. She is another playing starting to find her footing in the highly competitive Germany Women’s National Team. Despite having only played in nine games with the senior squad, she has already scored four goals – two at the 2015 World Cup.

A trio of young German players can already be called world class in Leonie Maier (24-years-old), Dzsenifer Maroszán (24) and Alexandra Popp (25). All three were members of Germany’s 2015 FIFA Women’s World Cup roster as well as the 2016 SheBelieves and Olympic Games squads. Marozsán and Popp, who have long been hailed as two of the top young players in the world after performing so well for Germany’s U-20 WNT, both scored at the 2015 World Cup and 2016 Olympics. In Canada, Popp scored against Ivory Coast, while Maroszán tallied her goal in the knockout stage against Sweden. In Brazil, Popp scored against Zimbabwe in the opening match of the tournament and Maroszán scored a crucial goal in the gold-medal game against Sweden, helping Germany take the title with the 2-1 win. Despite their young age, Marozsán and Popp have played 69 and 77 times and have scored 35 and 30 goals, respectively. Maier, who has recovered from a major knee injury, has 37 caps and seven goals to her name, including one at last year’s SheBelieves Cup. 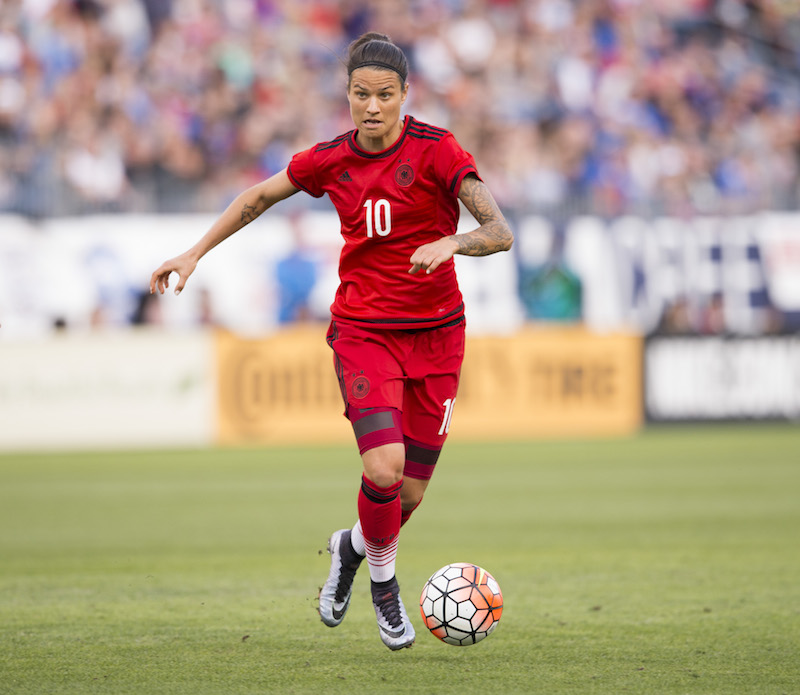 Germany has long been a European power, but its dominance has been extremely impressive. During UEFA Women’s EURO qualifying, Germany scored 35 goals and allowed zero. Ten of the players on the 2017 SheBelieves Cup roster scored a combined 25 goals, with Alexandra Popp leading the way with five goals in four games.

Anja Mittag, Isabel Kerschowski, Leonie Maier and Pauline Bremer each added three, while Sara Säbritz, Lina Magull and Mandy Islacker had two each. Lena Petermann and Dzsenifer Marozsán round out the goal scoring group with a goal apiece.