As the U.S. U-20 Men’s National Team prepares for the FIFA U-20 World Cup in Korea Republic, head coach Tab Ramos has named Erik Palmer-Brown team captain. As he did during the CONCACAF U-20 Championship earlier this year, Palmer-Brown will wear the armband when the U.S. opens the tournament on May 22 against Ecuador.

Here are five things you should know about the U.S. captain:

Made in Kansas City

On August 2, 2013, four years after joining the Sporting Kansas City Academy, Erik Palmer-Brown signed a professional contract, becoming the youngest player to sign with the club at age 16. Palmer-Brown made his MLS debut on May 18, 2014, and has since appeared 13 times in all competitions for his hometown club. Palmer-Brown also featured in the M.L.S. Homegrown Game during All-Star week in both 2014 and 2015.

The native of Lee’s Summit, Mo., is the third American to represent Sporting Kansas City at the U-20 World Cup, along with Mikey Lopez in 2013 and Francisco Gomez in 1999.

While the majority of his professional career has been spent in Kansas City, Palmer-Brown did spend most of 2016 on loan at Portuguese powerhouse Porto. During his time in Portugal, Palmer-Brown made 17 appearances for Porto B, helping the team win LigaPro, the second division in Portugal.

Palmer-Brown scored his first professional goal in November 2016 while representing Porto B against Leicester City’s U-23 side in the Premier League International Cup.

One of Three Returnees 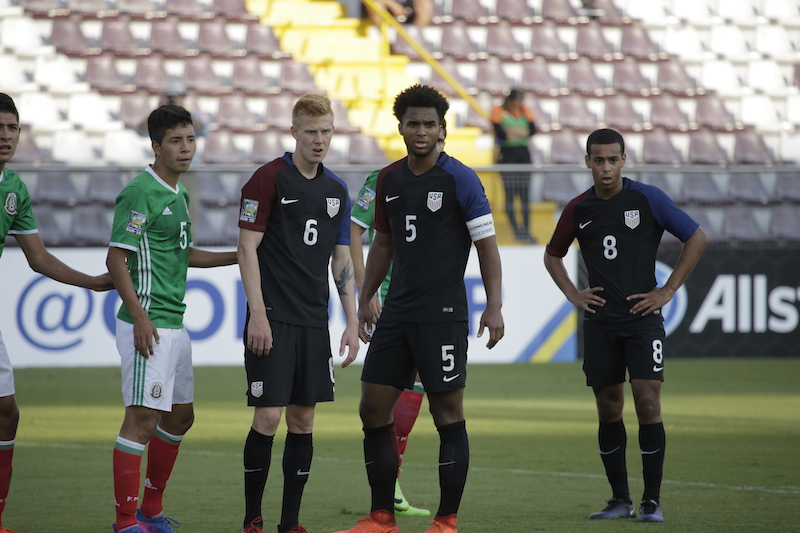 Palmer-Brown is one of three players returning to the U-20 World Cup after also playing in the 2015 edition of the tournament in New Zealand.

In 2015, Palmer-Brown appeared in one match, starting the group stage finale against Ukraine as the Americans advanced to the Quarterfinals before bowing out to eventual champion Serbia on penalty kicks. Palmer-Brown is joined by Cameron Carter-Vickers and Gedion Zelalem as the returnees to the U-20 FIFA World Cup.

Palmer-Brown won the Golden Ball as player of the tournament at the 2017 CONCACAF U-20 Championship in March, playing in all six matches en route to the USA’s first U-20 regional championship.

In the first game of the Classification Stage, Palmer-Brown a 29th minute header to lift the United States to an historic 1-0 victory against Mexico, snapping a 20-match unbeaten streak for El Trí at the CONCACAF U-20 Championship, a run that dated back to the 2009 tournament.

A center back by trade, Palmer-Brown showed his versatility by playing as a defensive midfielder during the 2017 CONCACAF U-20 Championship. While he has proven to have the tools to play in that position, U-20 MNT head coach Tab Ramos intends to have Palmer-Brown anchoring the backline at the upcoming World Cup.

“He is a center back,” Ramos recently said of Palmer-Brown. “In CONCACAF, we were able to get away with him playing in the number six position because he’s good enough to play there. I do believe that he’s good enough to play that position down the road, but whether we are going to require or need that from him in this particular tournament, I’m not sure. I certainly wouldn’t hesitate to put him in that position if we had to, but at this point the idea is to have him play center back.”