Five Things You Need to Know About the U.S. PNT vs. Canada

With the World Championships looming, the U.S. Paralympic National Team will play a set of matches this weekend against Canada. Here are five things you should know about the team’s rare home fixtures as they prepare for the year’s biggest competition.

When you’re competing to be the world’s best, head coach Stuart Sharp says that there’s no substitute for playing international matches. The PNT plays four to six challenge matches each year, but the side usually has to hit the road. This weekend’s matches against Canada mark the first home match for the PNT since February 2014, a game in which only four players on the current squad played in.

Many of the top-level Paralympic soccer national teams come from European countries, so they don’t have to cross the Atlantic far to find elite competition. More than half of the top 25 teams in the International Federation of CP Football ranking hail from the Old World, including six of the top ten. With the imbalance, the impetus is on the U.S. to travel to find high-level opponents.

The World Is Waiting

Hosted this year in San Luis, Argentina, the IFCPF World Championships represent the biggest Paralympic soccer competition of the year. A seventh-place finish at the 2016 Summer Paralympics in Rio guaranteed the U.S another trip to South America. They’ll face off against the top eight teams from Rio as well as eight qualifiers from last summer’s IFCPF World Championship Qualification Tournament in Denmark.

Canada, this weekend’s opponent, could be drawn in the U.S.’ group for the World Championships. The Canucks punched their ticket to Argentina with a seventh-place finish at the qualification tournament.

Canada will be the second squad that the U.S. squares off against this year. The PNT is coming off of two resounding victories over Chile in its last international matches, defeating La Roja 6-0 and 10-0 in San Bernardo. Six different players notched braces across the two matches and the U.S. scored in bunches, including two goals in the same minute during the second game. 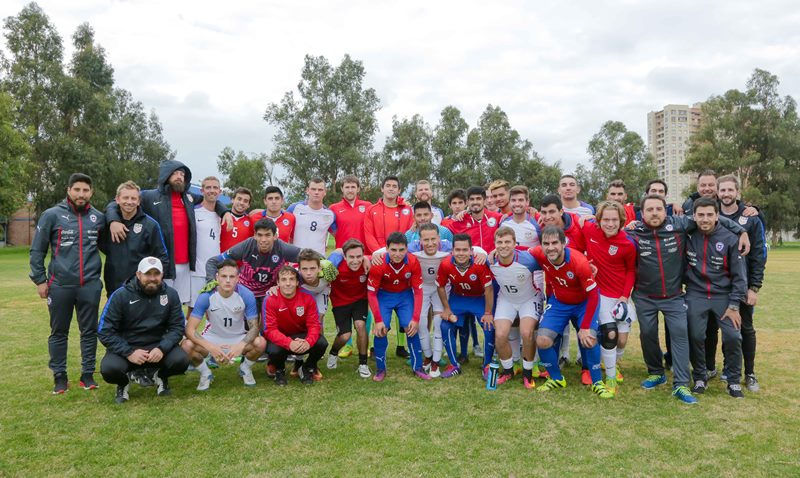 New Kids on the Block

Nick Mayhugh, Tim Blodgett and Ben Lindau all scored their first international goals against Chile. Mayhugh and Blodgett also scored their second goals later in the match. Blodgett’s brace was remarkable, putting the ball in the net at the 57th minute and again in the 58th. He is a former marine, while Mayhugh plays soccer at Division I Radford University in Virginia and Lindau will attend the University of Michigan this fall.

As the team typically experiences a lot of turnover, Sharp credits the newcomers’ success to the squad’s stalwarts for preserving the team’s culture and high expectations. Nine players return from the Rio roster.

The PNT faces off against Canada on Friday, July 21 and Sunday, July 23. Both games kick-off at 6:30 PM from the Premier Sports Campus in Lakewood Ranch, Florida.