The U.S. Paralympic National Team will play its final two matches at the 2017 IFCPF CP Football World Championships this Wednesday and Friday against Brazil and either the Netherlands or Ireland. Here’s what you need to know about the PNT’s run in San Luis, Argentina.

In the opener, PNT newcomer Cameron DeLillo forced an own goal in the seventh minute and scored one of his own in the ninth. Against the Norn Iron, captain Kevin Hensley scored in the 16th and 17th minute. The team’s leading scorers from last summer’s Rio Paralympics, Seth Jahn and Adam Ballou, also combined for four goals and two assists.

The performances clinched the USA a spot in the eight-team knockout round and booked the PNT a ticket to the 2019 IFCPF World Cup in Pinto, Spain, by virtue of a top-eight finish.

The final day of pool play brought the PNT’s biggest test of the group stage- a tie with Paralympic soccer powerhouse Ukraine. The world No. 1 Ukrainians won the Rio Paralympic tournament and have never fallen below the top-two in the world rankings. Last summer, they bested the U.S. 5-0 and 9-0.

Things were different in San Luis, as the U.S. hung tough in a 2-0 loss. Goalkeeper Sean Boyle put on a stellar performance, making several remarkable stops against a relentless Ukrainian attack. The PNT wasn’t able to convert its few opportunities to score, but Boyle’s 13 saves and strong play from the back-line kept the team in the game.

One for the Ages

With a second-place finish in Group D, the USA took on England in the tournament quarterfinals. The Three Lions roared through the group stage, finishing with a plus-25 goal differential that included a 5-0 rout of the Netherlands, the highest-ranked side in Western Europe.

The contest was one of the “best matches” in the history of Paralympic soccer according to tournament organizers. Boyle once again put on a show with 14 saves, teaming with defender David Garza to stem the explosive English attack. In the 24th minute, the USA broke through as Andrew Bremer dished to Ballou in front of the net, where he knocked in the first goal allowed by England in the tournament.

England tied it up in the 36th and took the lead late, but the U.S. had two golden opportunities in the final few minutes of the match to equalize. English goalkeeper Giles Moore got just enough of a one-timed shot from Seth Jahn to poke it out-of-bounds.

Jahn had another chance in injury time, but the keeper once again got a hand to the on-target attempt.

The Beat Goes On

With the loss to England, the USA moves to a four-team competition for fifth through eighth place at the tournament. After its impressive run through the group stage and knockout round, the PNT has a chance for its best finish at a major world tournament since it took fourth at the 1996 Atlanta Paralympic Games.

Next up for the USA is Brazil, which lost a 1-0 thriller in extra time to consistent Paralympic contender Iran. With a win, the PNT will face the winner of the Netherlands vs. Ireland, the other two losing quarterfinalists.

Last summer, the PNT played its strongest match in Rio against the Dutch, earning a 2-2 draw with some late magic from Ballou, who scored in the 60th and final minute. 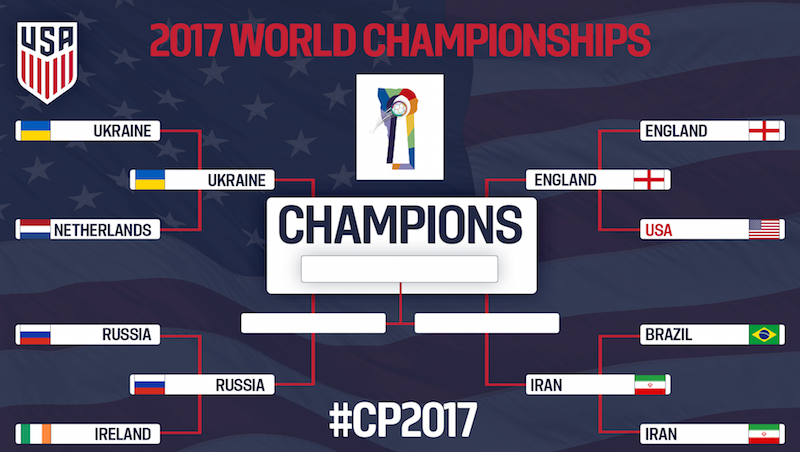 Four teams remain standing in the World Championships’ knockout round: Ukraine, Russia, England and Iran. Ukraine, Russia and Iran represent traditional Paralympic powers. The three countries have claimed all but one Paralympic medal since 2004 and seized all but two of 15 the top-3 spots at every other world championship over the last ten years.

The day’s first semifinal pits Paralympic upstart England against Iran. After rolling through the group stage, the English showed their mettle in their comeback victory over the USA but they will be the underdogs against Iran. Forced to withdraw from the 2015 World Championships in England due to visa issues, Team Melli is attempting to reach its first World Championship Final since 2011.

A clash of titans awaits in the second semi-final as Paralympic rivals Ukraine and Russia meet for a trip to the championship match. The two last met in the Final of the 2015 IFCPF CP Football World Championships, where Russia emerged victorious in a 1-0 thriller. A rematch in Rio was off-the-table, as Russia’s entire Paralympic team was banned from competition. Prior to last summer, Ukraine and Russia met in three of the last four gold medal matches.