Chris Wixson’s U.S. Soccer fandom has been defined by travel. He’s been to every FIFA World Cup since 1994 and has followed the Men’s National Team through the grind of World Cup Qualifying in Central America and the Caribbean.

Now, one of the most important trips he’ll ever take as a fan won’t be to a match. Rather, to the U.S. Soccer Annual General Meeting (AGM) in Orlando, Fla. and Saturday’s National Council Meeting that will determine the course of the Federation moving forward. Though he’ll be seated in a hotel ballroom rather than on his feet in a supporters’ section, Wixson couldn’t be more excited.

For the first time ever, fans will have a voice in U.S. Soccer’s governance. Part of the newly-formed, five-member Fan Council, WIxson will serve as one of two delegates selected to represent their interests.

“It’s a nice move to give the fans a voice in a meaningful way, in an official way,” Wixson said of the Fan Council, which was approved by U.S. Soccer membership during the 2017 AGM. “It’s written into the bylaws that we are a governing Council that has actual votes and delegates. We’re not going to sway an entire vote, but it’s meaningful to us and that’s what’s most important. We’re the die-hard fans and we represent the die-hard fans and this is extremely meaningful to us.”

U.S. Soccer is governed by those it serves. The National Council serves as the Federation’s main voting body and its composition of separate councils for athletes, adult, professional and youth soccer reflects U.S. Soccer’s constituency. This year, members of the Fan Council will cast votes for the fan membership of U.S. Soccer at this weekend’s AGM.

Ashley Brown (pictured right, above) will join Wixson in Orlando. Her fandom is similarly founded in travel. The attorney treks across the country to make as many U.S. Soccer games as she can and also ventures far and wide to attend matches for the three clubs she supports as a season-ticket holder: Atlanta United FC, Houston Dash and Portland Thorns. Her trip to Orlando, away from any on-field action, presents an exciting, unique opportunity.

“It’s an honor for me, absolutely,” Brown said. “We’ve already started talking about what we can do to build membership over the next few years and get people more officially involved with U.S. Soccer, for the best of everyone. I feel very lucky and honored to have the opportunity. Even more than that, I’m just emotionally very excited.”

The initial Fan Council includes five U.S. Soccer members, elected by their peers, to represent fan interests in Federation governance. From that group, Brown and Wixson earned the right to serve as the Fan Council’s boots on the ground in Orlando. 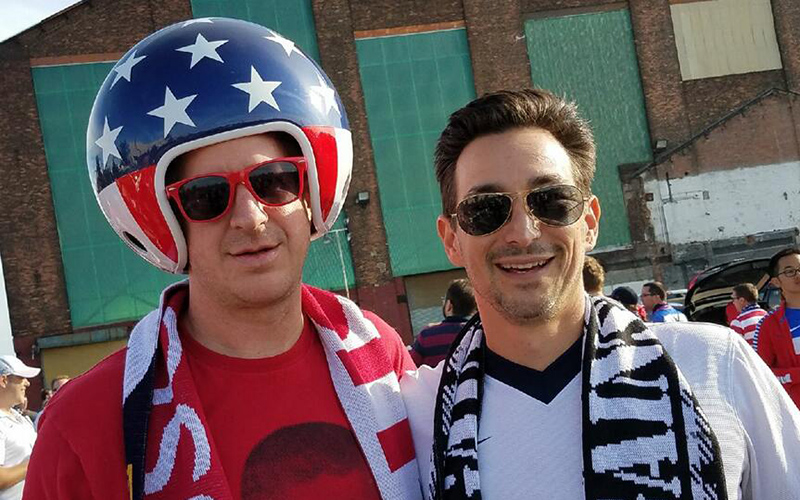 Prior to the AGM, the Fan Council representatives headed to U.S. Soccer headquarters in Chicago, where several upper-level executives primed the pair on the inner-workings of the Federation. Wixson (above, left), a marketing professional, felt like a kid in a candy store.

“I was giddy during the whole process,” Wixson said. “I enjoy understanding my own business so getting insight into the business of something that I’m passionate about it, I was giddy. I really, truly like what’s on the field, I truly like the fan experience but it has to run efficiently. It has to have strategy, it has to have forward-looking insight.”

The Fan Council joins U.S. Soccer at a crucial juncture as the Federation undergoes its first contested presidential election in 20 years. More fans than ever are invested in U.S. Soccer’s behind-the-scenes processes. For Brown, it’s an incredibly exciting time to get involved with the Federation’s governance.

“It’s incredibly important to give the fans a voice, now more than ever,” Brown said. “I think people’s passion for and engagement with the Federation’s governance has never been stronger than it is right now. It’s an interesting time to get involved and lay the groundwork for what a Fan Council could be in the future.”

The pair of delegates’ main responsibilities will come during Saturday’s National Council Meeting, where they will vote on a new president, budget approvals and other Federation policies. Their votes on these matters will be the first officially cast by U.S. Soccer fans.

The National Council Meeting and AGM represent just the beginning for Brown, Wixson and the other three members of the Fan Council. The event launches the quintet’s two-year term as the fans’ voice in USSF governance. In their eyes, the work has just begun with a view towards growing U.S. Soccer membership and expanding the fans’ voice even further. As this year’s AGM sees the Federation move forward, it will also help the newly-minted Fan Council find its place.

“To be in the room, to actually be pushing the buttons is cool, the natural tension in the room on big events like this is going to be cool. It’s going to be a blast,” Wixson said. “What a great way to get things kicked off as a Fan Council. We’re very excited about this, but we’re very excited right afterwards to lay the foundation for what the Fan Council really is, what it can do, how we can grow that membership and improve our fan experience.”