Important Test Ahead for the U.S. WNT at SheBelieves Cup

Conceived and developed by the U.S. Women’s National Team players, SheBelieves is a movement that was launched to inspire young girls and women and encourage them to accomplish their goals and dreams, athletic or otherwise. The campaign was originally launched in 2015 and since then has evolved and grown into a special bond between the team and its fans, taking its powerful message of empowerment and that of believing in yourself into communities across the nation.
February 27 2018

Through dedication, teamwork, perseverance and success, the players in the U.S. team inspire new generations of young girls and women to be better and strive for better. In 2016, the SheBelieves campaign was taken a step further with the launch of the SheBelieves Cup, a tournament that not only features tremendous talent on the field, but an event that celebrates empowerment and that has become the embodiment of the SheBelieves spirit by showcasing strong athletes dreaming big and reaching for their goals, thus hoping to inspire generations to come about their own aspirations.

Beginning on March 1, U.S. Soccer and the U.S. Women’s National Team will host the third annual SheBelieves Cup, which will bring together four of the top six countries in the world for three doubleheaders of intense competition.

“I’ve said this to my players, this is one of the most prestigious and competitive tournaments in the world for women,” said U.S. WNT head coach Jill Ellis. “Three fantastic teams are coming to our country for our fans to see and it’s obviously a great opportunity to vet ourselves.”

The USA, ranked No. 1 in the current FIFA Women’s World Rankings will take on No. 2 Germany to open its tournament on March 1 (MAPRE Stadium, 7pm ET; ESPN2), while No. 3 England will face No. 6 France earlier that day in the same venue (4pm ET, ESPN3). Full Schedule.

The pace of the tournament is rapid, and can be likened to the group play format at a World Cup or an Olympics, with only two days in between games to travel, recover and get back on the field. It is a valuable tournament to help players get accustomed to the schedule of bigger tournaments.

Each team will play three games in one week as it vies for the tournament title, which the USA claimed in 2016 with nine points after three wins, and France won in 2017 with seven points after two wins and a draw. “This tournament, it’s huge,” said U.S. WNT midfielder Lindsey Horan. “We’re playing against three of the best teams in the world and each team is different and all have a different style of play. We respect them all because they’re very good. Especially with qualifying coming up and Tournament of Nations in the summer, it’s a great opportunity to see what these teams have and what we’ve got.”

The chance to play against the best is what makes this tournament so valuable for the U.S. WNT in 2018. With World Cup qualifying on the horizon, the players know that these kinds of games against top-level competition are true tests of strength, both mental and physical, and will help reveal how the team can get even better in the next nine months.

“We’re locked on,” Ellis said. “We know every game from now on until qualifying in October is preparation for the moment. Focus is probably the word that is permeating through the camps and when we’re together.” 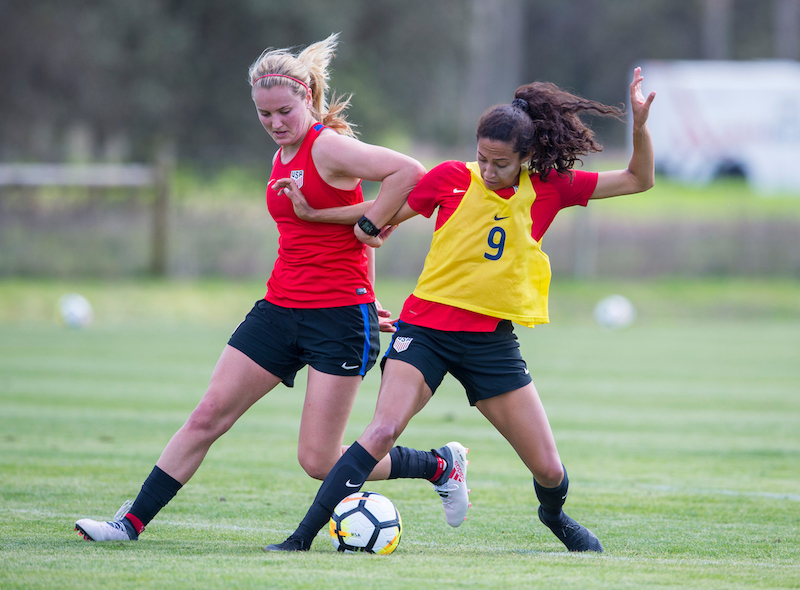 The USA began 2018 with a strong performance against EURO runners-up Denmark in January, winning 5-1 in San Diego. The WNT will now look to build on that start and amp up the intensity against great teams in a tournament that will provide fans the chance to see some of the world’s best players here in the USA.

“It’s great to have a tournament like this in the USA so girls and boys can come watch great teams competing against each other and hopefully they will be inspired to fall in love with soccer even more,” Horan said.