USA vs. Germany: Thrice as Nice at the SheBelieves Cup

In the young three-year history of the SheBelieves Cup, the U.S. Women’s National Team has come out victorious in each game against long-time rival Germany.
March 3 2018

Launched in 2016, the SheBelieves Cup is a major part of the SheBelieves campaign, designed to empower and inspire young girls and women to dream bigger and reach for their goals, athletic or otherwise. This year, the third edition of the tournament is featuring the same four teams that have participated in the first two: England, France, Germany and the USA.

USA vs. Germany: 2018
Courtesy of a Megan Rapinoe goal, the No. 1 ranked U.S. WNT defeated No. 2 Germany, 1-0. The lone goal of the match came about when Alyssa Naeher's long punted service made it to Alex Morgan, who was stationed just past midfield. She just got a head on the ball to split the Germany backline and it rolled towards the goal. Rapinoe then outran her defender and beat Germany’s Almuth Schult to the ball before hitting a shot between her legs into the back of the net. 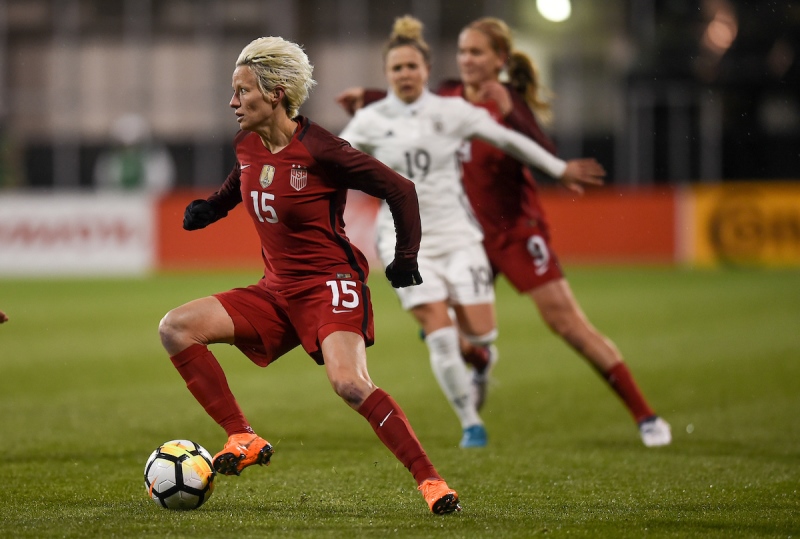 As exciting as the goal was, most games are won through tough defense and that’s exactly what the USA delivered on a stormy night. The U.S. WNT backline made up of veterans Alyssa Naeher and Kelley O’Hara, and three youngsters in Abby Dalhkemper, Taylor Smith and 19-year-old Tierna Davidson stood tall against one of the most dangerous set of attackers in women’s soccer. For Dahlkemper, Smith and Davidson, it was only their 15th, ninth, and second career caps for the WNT.

“The game was a great challenge that you can’t replicate,” said U.S. WNT head coach Jill Ellis after the match. “I liked Tierna’s composure on the ball. She needed to be tested in a physical, battling game and obviously, Germany’s players are strong and powerful. I thought she did well, as did Abby. Taylor started a little bit tentative but got her feet under her and was more aggressive in the second half. It was fantastic test for us and they came through.”

The USA and Germany kept it close in the first half with five and four shots each, respectively, though the USA later out-shot Germany 9-3 in the second half. Both games were also the opening matchup for each side during that respective year.

Things @mPinoe just did: THAT

The final scoreboard at MAPRE Stadium on March 1, 2018, certainly produced a bit of dejavu to March 1, 2017, when Lynn Williams’ lone goal in the 56th minute was the match-winner for the USA in Chester, Pa.

As was expected with the top two teams in the world, the affair was an evenly played match throughout the entire 90 minutes. Once again, the game was end-to-end, the scoring was low and the defense was crucial.

The USA’s first moment of danger came in the 10th minute and Germany responded with a chance of its own in the 12th minute when Sara Däbritz’s rocket seemed to be heading into the upper right corner, but U.S. ‘keeper Alyssa Naeher responded with a diving save and pushed the ball out of danger.

The U.S. took control of the match and missed several close chances in the latter part of the second half that would have sealed the game. In 2017, the USA out-shot Germany by a thin margin of 15-11, even though Germany had the slight 4-3 edge on shots on goal. 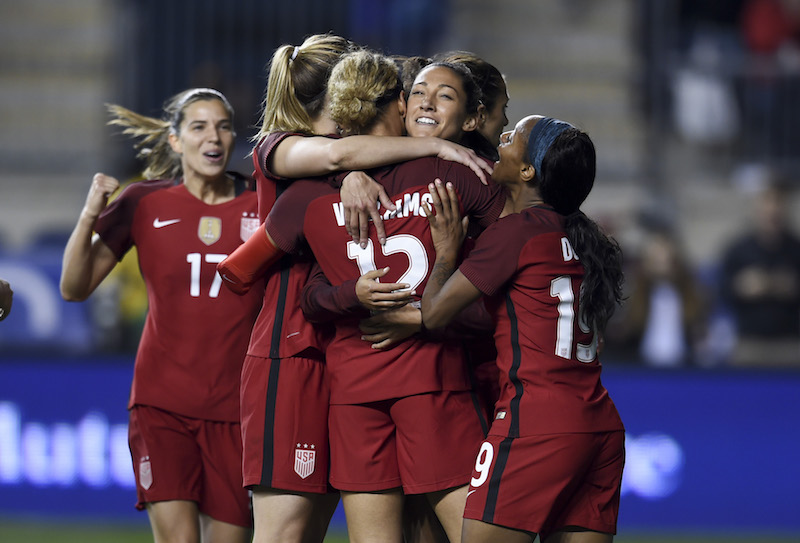 Unlike 2017 and 2018, the 2016 game between the USA and Germany was the sixth and the last of the tournament after both teams had claimed wins against France and England days earlier. As it always is when the No. 1 and No. 2 ranked teams in the world square off, the match was highly anticipated. Both teams had six points each – though Germany had the advantage on goal difference and all it needed was a tie – so the game became a defacto tournament championship, with the winner taking the inaugural SheBelieves Cup trophy.

The U.S. Women’s National Team scored two goals in a span of six minutes to defeat Germany 2-1 and win the 2016 SheBelieves Cup.

Anja Mittag’s long-range tally in the 29th minute left the USA needing two goals to win the competition and the response was almost immediate. Alex Morgan evened the score with a sublime bit of skill six minutes after Germany had taken the lead on what was one of the most spectacular goals of her career. She ran onto a long service from Meghan Klingenberg, lifted the bouncing ball over one defender and volleyed it home straight out of the air on the other side. Samantha Mewis scored the title-clinching goal just six minutes after that to secure the 2-1, tournament-clinching victory.

While the win in 2016 led to a tournament title for the U.S. women, that was not the case in 2017. Last year, the U.S. won that opening game but then went on to drop its next two matches against England (1-0) and France (3-0). This time around, the team is hoping that Thursday’s night win in frigid Ohio, will help build momentum to make a successful run at the title with games against France on March 4 (12 p.m. ET; ESPN2) and another vs. England on March 7 (7 p.m. ET; ESPNews) in Orlando remaining.

“It’s competitive,” U.S. WNT midfielder Julie Ertz said when asked about the physical play that always accompanies a USA-Germany clash. “You have some of the best teams in the world. We’re going to battle out there, we know that. I enjoy that type of game.”