Sofia Huerta’s Journey from Green to Red, White and Blue

Growing up in Boise, Idaho, Sofia Huerta’s soccer upbringing was quintessentially American. Many hours were spent on youth soccer fields, which led to club success, followed by college recruiting and a scholarship to one of the top programs in the country at Santa Clara.

Inside the Huerta household, her experience featured a big Mexican influence and national pride always existed in double doses. She is half Mexican. Her father Mauricio was born in Mexico and her mom Jody is American. Spanish was spoken in her household while she was growing up. It’s that heritage that gave her the opportunity to play for Mexico, and after competing on the fringes of the USA’s Youth National Teams as a teenager, she decided that putting on that green jersey was correct path at that time in her life.

Huerta played for Mexico at the 2012 FIFA U-20 Women’s World Cup (scoring three goals), and earned five caps for the senior team – all in friendly matches and one against the USA – but her play in the NWSL for the Chicago Red Stars led to the chance to change associations and play for the U.S. Women’s National Team.

While some may consider it a dilemma to have the choice of playing for two countries, Huerta considers herself blessed to have gotten that chance, as both countries mean so much to her, with people on both sides of the border that she cares deeply about. More importantly, she’s always received support to pursue her dreams from friends, family and teammates in both countries, which has made her journey a bit easier, if certainly unique and emotional.

“To be honest, whenever you step on the field to represent your country, the moment is always very important,” Huerta said. “It’s important now, but it was also important when I did it for Mexico. I have a lot of family in Mexico and there was intense pride during that period of my life as well.”

Conversations initiated between Huerta and the WNT staff in late summer 2017 as she was enjoying another fine season with the Red Stars and U.S. head coach Jill Ellis wanted to bring her into camp to train with the team. While Huerta was not eligible to play for the USA at that time, with nothing guaranteed, she expressed her sincere interest in taking her shot with U.S. team, so U.S. Soccer began the process of requesting a one-time change of national association with FIFA.

On Sept. 14, 2017, U.S. Soccer received word that FIFA had approved the change, which meant Huerta was immediately eligible to play for the USA. She was included on the game day roster for the match against New Zealand on Sept. 15 and earned her first cap when came on as a substitute in the 51st minute. It was a whirlwind 24 hours as Huerta became the first player to play for and against the senior U.S. Women’s National Team. 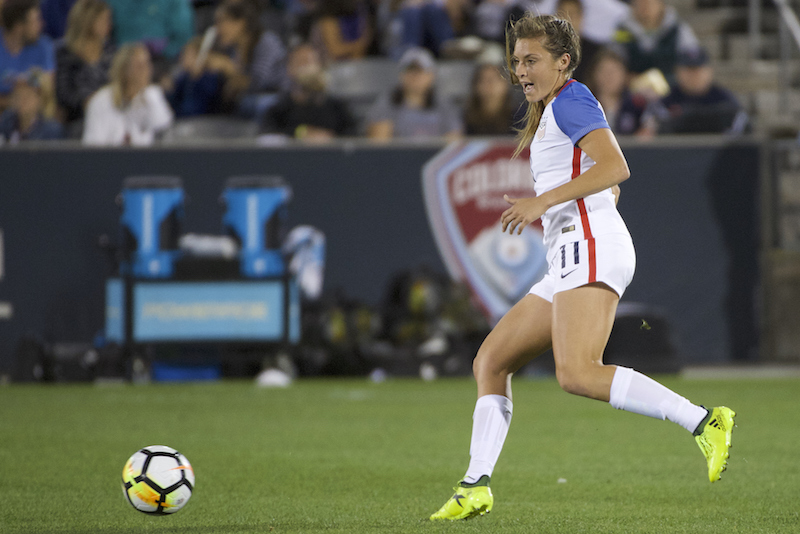 If she makes the 18-player game day roster for the matches against Mexico on either April 5 and April 8, and gets onto the field, she would become the first player to play for Mexico against the USA and for the USA against Mexico.

“To go through all this has been an interesting experience, but one where I learned a lot about myself,” Huerta said of the possibility of facing her former team. “When I played for Mexico against the USA in 2013, I can’t even explain to you what that felt like. I grew up here and my goal was to play for the U.S. but I was playing for Mexico, and I was proud, but I also remember thinking how much I wanted to try to play for the U.S. if I ever got the chance.

Now, if I get the opportunity to roster for one of the upcoming games and play against Mexico, I think that it will almost be a symbol of what I’ve been working for my whole life. And it would be so special because I would be playing against a team that I respect so much. I have nothing but love for Mexico and I’m so grateful for them because they’ve always supported me and if I hadn’t played for Mexico and gotten that international experience, I don’t know if I would be with the U.S. team now. It would to mean a lot to me and it would be surreal if I have a chance to step on the field.”

One of the main reasons Huerta will always hold the Mexican team in high regard is that they always believed in her and supported her. Her teammates, coaches and administrators knew her ultimate dream was to play for the USA -- it was not a secret – yet they still welcomed her with opened arms, gave her opportunities and helped her develop on the international stage. The women’s soccer community is very tight-knit, so the support she was shown is something she will forever cherish.

“A lot of the Mexican players on this roster for the upcoming games, I played with and I’m also in contact with a few of them on a consistent basis,” Huerta said. “They of course wanted me to play with them, but they respect my decision and my story and they have showed me tremendous amounts of respect and have always congratulated me on everything. Even recently I got an Instagram message from one of the girls on the team that said, ‘I’m so excited to see you.’ It was something so simple but I wasn’t necessarily expecting so it was such a sweet message. I can honestly say that when the change happened, no one (with Mexico) was surprised and everyone was very supportive and they’re hoping that everything works out for me.” 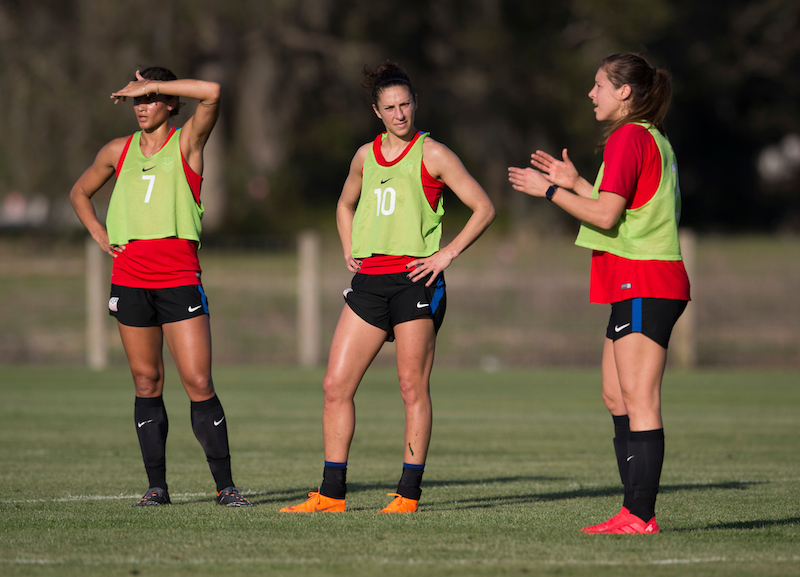 Huerta at training with Lynn Williams and Carli Lloyd.

Even though Huerta no longer plays for Mexico, and never will again, as any change of association is a one-time thing, the country and its people are a part of who she is and will always be. She’s proud of her Latina heritage and while she now wears a different jersey, the memories of playing for Mexico, and the time spent there with her family, will also be warm ones.

“I used to go to Mexico a lot when I was younger,” she said. “Some of my fondest memories are from being in Mexico during Christmas. Christmas in Mexico is such a big deal and there are so many different traditions. In Idaho, it was just my family celebrating, but in Mexico it’s my aunts and uncles and cousins, and we have a huge celebration on Christmas Eve called Noche Buena that my family spends weeks preparing for. It’s a chance for us to celebrate what Christmas means to us and that’s my favorite part. It’s so special. I have such a strong connection with them and when I see them it’s like no time has passed.”

So, while the colors of her National Team jersey have changed, she’ll always have space in her heart and mind for a little green.