The U.S. Women’s National Team defeated Chile on Friday, Aug 31 in Carson, California, putting together a dominant 3-0 victory in which 19-year-old defender Tierna Davidson scored her first goal at the senior level in just her 11th cap, the USA benefited from a Chile own goal and Christen Press tallied in her 100th cap celebration game. The result was a positive one for the USA, but the bigger takeaways were how the match helped prepare the USA for the upcoming Concacaf Women’s Championship that will send three countries directly to the 2019 FIFA Women’s World Cup.

The Chileans, while physically outmatched, possessed the ball well and were disciplined in their low-pressure defense. While Chile was a brand-new adversary for the USA, they played a style that the USA is likely to see in qualifying: a group of skillful players playing with a lot of heart and pride dedicated to limiting the USA’s space in the attacking third.

The match also had some wild twists and turns, presenting the USA with some unexpected situations, which in retrospect were “teachable” moments to help prepare for the sometimes unpredictability of Concacaf qualifying. The game was an intense one played in front of a loud and boisterous crowd. Chile battled hard and tried to push the USA’s buttons with some gamesmanship. There were also more than a few calls that did not go the USA’s way – the USA was denied not one, not two, but three goals that likely should have been allowed – which highlighted the need for the U.S. players to remain calm even when things don’t go their way and continue to stay focused on the game plan. 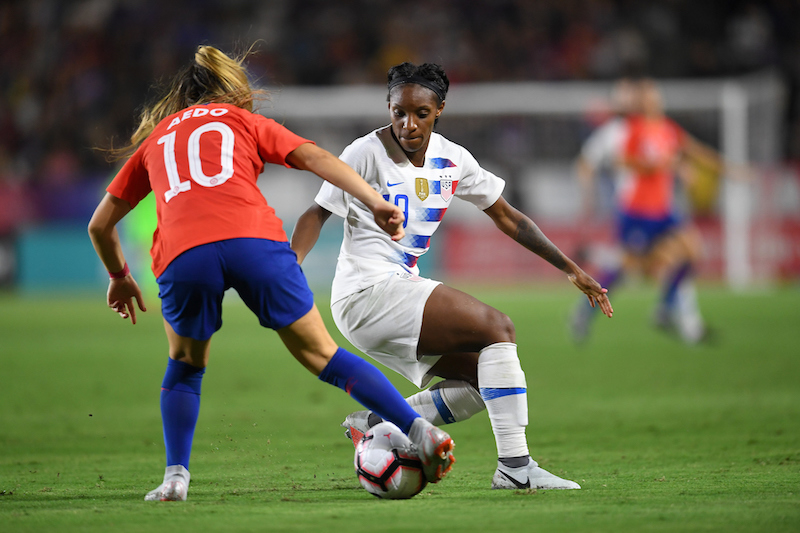 “It was definitely a chippy game,” U.S. WNT defender Crystal Dunn said. “Chile plays with a lot of pride and they’re a really good team. It was tough to break them down at times. This is the kind of competition we want heading into qualifiers. It was a good win for us and we’re going to build on it for the second game.”


The USA also faced a goalkeeper that was in the zone, a place that Christiane Endler seems to live. The game should have, and would have, featured a far larger score line had it not been for some excellent play from Endler, who plays her club soccer at Paris Saint-Germany in France.

Endler’s performance in the South American qualifying tournament was one of the main reasons Chile earned its first berth a Women’s World Cup and against the USA, she had a stand-out game. The USA out-shot Chile 24-1, but Endler made nine saves – on the USA’s 11 shots on goal – several of the spectacular variety. She surely impressed the U.S. team and crowd 23,544 fans, the second largest crowd to watch the USA play this year.

“It’s really good for us to have these kinds of games where we have to bring the quality in our final passes, and in our finishes and in our execution,” U.S. WNT forward Christen Press said. “Hopefully we carry this momentum into World Cup Qualifying.”

With qualifiers only a month away, and the World Cup on the horizon for next summer, the USA will have one more chance to face Chile, build on what they learned from Friday’s match and finish the run up to the Concacaf tournament on a high note as the most important competition of this cycle nears. Friendlies of this kind, where the play can get rough and frustration can quickly build, are valuable to have now. On the big stage, when it’s becomes win to advance, maintaining level-headiness is key, even when things aren’t going your way.

“It’s always a god thing when you can play a team again, and for us it’s about composure,” Dunn said. “We need to take advantage of what they give us and we have to move the ball quicker.”

A crowd of around 14,000 will see if the USA can accomplish those goals in the capper to the two-game set vs. Chile on Tuesday night Sept. 4 at Avaya Stadium in San Jose, Calif. (7 p.m. PT on ESPN2 & UDN). The games are also extremely valuable for Chile, which will be a Women’s World Cup debutante next summer after qualifying for the tournament for the first time by finishing second in the 2018 Copa América Femenina.