One of the most influential figures in the history of women’s soccer will bring her latest tenure with U.S. Soccer to a close at the end of 2018.
October 8 2018

“April Heinrichs is a world champion as a player, a coach and an administrator,” U.S. Soccer Secretary General/CEO Dan Flynn said. “She is a pioneer for the women’s game who never hesitated to share her knowledge and experience for the betterment of others and for that we are all appreciative.

So ends what can be called Heinrichs’ “Act 3” with the U.S. Soccer Federation in a remarkable professional life spent in support of the women’s game.

“Looking back starting in 1985 as a player and then head coach of our Women’s National Team in the early 2000s, it was a dream come true in every conceivable way,” said Heinrichs, who has worked a total of twenty Women’s World Cup, Olympic Games or youth World Cup tournaments as a player, coach, scout, or member of the FIFA Technical Study group. “And then to have eight years as Director of our Youth National Teams, working with our nation’s best and brightest players and coaches, I can’t imagine a better profession. It’s a privilege every time you represent the USA, every time you step on the team bus and at every training session. I’ve done it for so many years and now is a good time for someone else to do it.”

Act 1 came at the genesis of the Women’s National Team program. Heinrichs, who won three NCAA titles in the early years of the UNC dynasty, was a member of the Triple-Edged Sword, the devastating front line that also featured Michelle Akers and Carin Gabarra, which led the Anson Dorrance-coached U.S. team to victory at the 1991 FIFA Women’s World Cup. Heinrichs scored twice in the 5-2 victory against Germany in the semifinal. All three of those forwards would be elected to the National Soccer Hall of Fame with Heinrichs, in 1998, becoming the first female player so honored.

Heinrichs won the U.S. Soccer Female Player of the Year Award twice, in 1986 and 1989, and as a pioneer in every sense of the word, she was also one of the first American women to play professionally overseas, playing in Italy with Juventus and Prato.

A tremendous competitor during her playing career, Heinrichs, along with numerous other players and coaches during those early years, deserves much of the credit for establishing the incessant winning mentality that has characterized the Women’s National Team program for so many years.

On July 7, 1986, Heinrichs earned her first cap while playing in what was the fourth-ever match for the U.S. Women’s National Team. It was also the first win in the program’s history, which was appropriate, as she then spent her adult life winning and helping others win as well. Her playing career culminated in that 1991 Women’s World Cup title, where she lifted the first world championship trophy for women’s soccer as the captain of the United States.

Perhaps those injuries hastened the inevitable, because those who played with her knew she was destined to be a coach -- Heinrichs has held a USSF “A” coaching license since 1990 -- and she jumped right into the college game.

She was the head coach at Princeton University, the University of Maryland and the University of Virginia. She also was an assistant coach for the USA’s 1995 FIFA Women’s World Cup Team and a scout for the USA during the 1999 FIFA Women’s World Cup. She stayed involved with U.S. Soccer, coaching the U.S. Under-16 Girls’ National Team during the nascent developmental years of the girls’ YNTs.

In 2000, she started Act 2, becoming the fourth official head coach and first female head coach of the U.S. Women’s National Team. Heinrichs would compile a record of 87-17-20 while leading the USA to a silver medal at the 2000 Olympics and a third-place finish at the 2003 FIFA Women’s World Cup, before capping her time at the helm of the WNT by coaching the USA to an Olympic gold medal in 2004 in Greece. 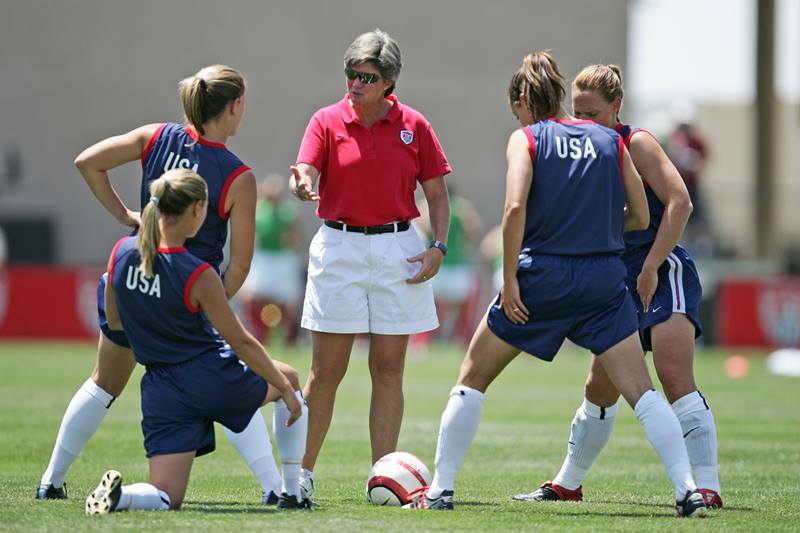 She also oversaw the staff and team that won the first-ever FIFA youth world title when the Tracey Leone-coached squad won the 2002 FIFA Under-19 Women’s World Cup in Canada.

After the gold medal victory in Athens, she left U.S. Soccer and returned briefly to the college game before spending four years as Sport Performance Director with the United States Olympic Committee working with Olympic team sports.

She returned to U.S. Soccer for Act 3 in 2011 as the Technical Director for the Women’s Youth National Teams and over the past eight years has spearheaded impressive and important growth within the program. U.S. Soccer now has a National Team for every birth year from U-14 through U-20 and the head coach for each team is now a full-time position.

The hiring in 2011 of Heinrichs and Jill Ellis (now the head coach for the senior Women’s National Team) marked the first time U.S. Soccer had appointed full-time positions to oversee the Women’s Youth National Team program and the programs’ overall development.

“To this day, every time our National Anthem is played, I get goosebumps, triggering those game day emotions knowing it’s time to perform,” Heinrichs said. “Game day with the National Team is unlike any other day - those are the best days no matter your role – when it’s time to rise in the pressure cooker and represent the USA.”

During her time with the Youth National Teams, Heinrichs was a world class ambassador to the many Federations around the world while she and her staff created environments that helped many young players maximize their potentials as people and players, rise through the ranks of the National Teams, excel at top colleges and move into the professional game. The U.S. team that won the 2012 FIFA Under-20 Women’s World Cup had four players that have gone on to star for the senior team.

Heinrichs also always made it an emphasis to give many women, the majority being former WNT players, the chance to coach in the National Team programs.

But just as she has helped mold many a player, there were many who also molded her, and to those people she is thankful.

“I want to thank Anson Dorrance for developing me as a player; John Ellis for mentoring me in my early coaching years; Jill Ellis for challenging me at every turn; Dr. Bob Contiguglia for believing in me and Sunil Gulati, Dan Flynn and Jim Moorhouse for entrusting me with our Women’s Youth National Team program,” Heinrichs said. “Without these decision-makers, partnerships and their trust and friendship, I would never have traveled the world, worked with the best of the best and been so blessed in soccer. I am the luckiest person I know.”

Of course, this will not be the end of her contribution to the beautiful game. “I will undoubtedly miss our great coaches and working with our Youth National Team players and teams, but the time is right to move on and I’m looking forward to the next chapter in my career and life,” Heinrichs said. “I always need a bone to chew on, so I will take some time to regenerate and then find another way to contribute.”

And now the curtain comes down on what has been a remarkable run. Like any great show, it has been filled with great characters, drama, loss and triumph, but one thing is for sure, April Heinrichs’ contributions to U.S. Soccer over the past 30-plus years merit a standing ovation.