U.S. Women’s National Team head coach Jill Ellis has named 24 players for an almost two-week trip to Europe that will end the USA’s 2018 schedule with matches in two historic capitals, against Portugal in Lisbon and Scotland in Glasgow. Ahead of the challenging tour, Ellis spoke about her goals for the trip, bringing a larger roster overseas and continuing the work to end a remarkably productive year on a high note.

What are the main goals for the matches against Portugal and Scotland?

“It’s been a year of working hard to take strides to improve, so I think finishing the year off with two solid performances would be a fitting end to 2018. The players, medical team, and technical staff worked very hard to ensure we peaked for World Cup qualifying and got the job done, so these two friendlies will be a chance to continue that work and end this period on a high note with a good feeling of what’s to come.”

There were 20 players on the World Cup Qualifying squad, but you’ve increased the roster to 24 for this trip. What was the impetus for the additions?

“We’ve brought a larger roster to Europe for two main reasons. First, our core players have had a very demanding year and the priority for that group was qualifying for the World Cup. A slightly larger roster enables us to share players’ loads in training and in matches while still getting in quality minutes. The second is that this approach will give us an opportunity to look at the depth in certain positions outside of the 20 players from qualifying. With two midfielders and two defenders [Morgan Brian, McCall Zerboni, Tierna Davidson and Kelley O’Hara] not with us, this trip will provide a window for several other quality players to get time with the main group.” 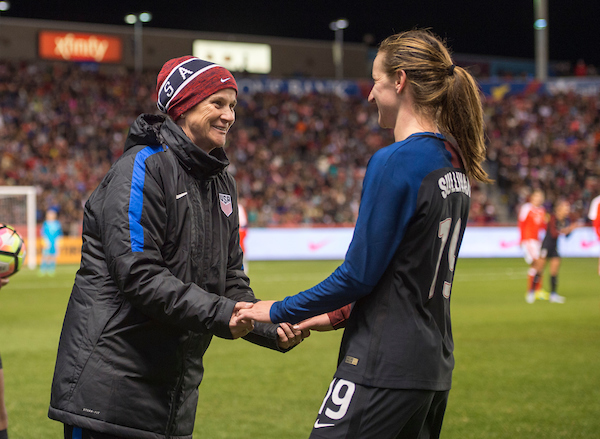 What are the benefits of holding this last camp of the year in Europe as you and your staff plan for next summer?

“This trip and our January Camp will give us two opportunities to ‘dry run’ the logistics of traveling to Europe next summer. We love playing at home, but adjusting to time change, recovering from international travel, traveling within Europe and playing in front of away crowds are all good experiences to prepare us for next June.”

These two matches end an extremely competitive 2018 schedule. The next time the team gets together will be in January. What message will you give the players after the Scotland game?
“To take a well-earned break and enjoy some downtime.  They have been either with their club teams or with us since January, so they need to recharge their batteries.  After a break, [High Performance Coach] Dawn Scott will work with each player to customize a “gap plan” that will prioritize their specific performance needs. The base they build with Dawn will give us a solid starting point in the new year.”