As the crowd of 17,264 erupted inside a packed Dick’s Sporting Goods Park on Thursday evening in Colorado, viewers at home joined in on the historic moment thanks to Fox Sports’ play-by-play man JP Dellacamera’s goal call: “LOOKING FOR 100…SHE’S GOT IT!

The high decibel screams of joy were all happening because Alex Morgan, one of the most famous strikers in the world, had just scored her 100th career goal. 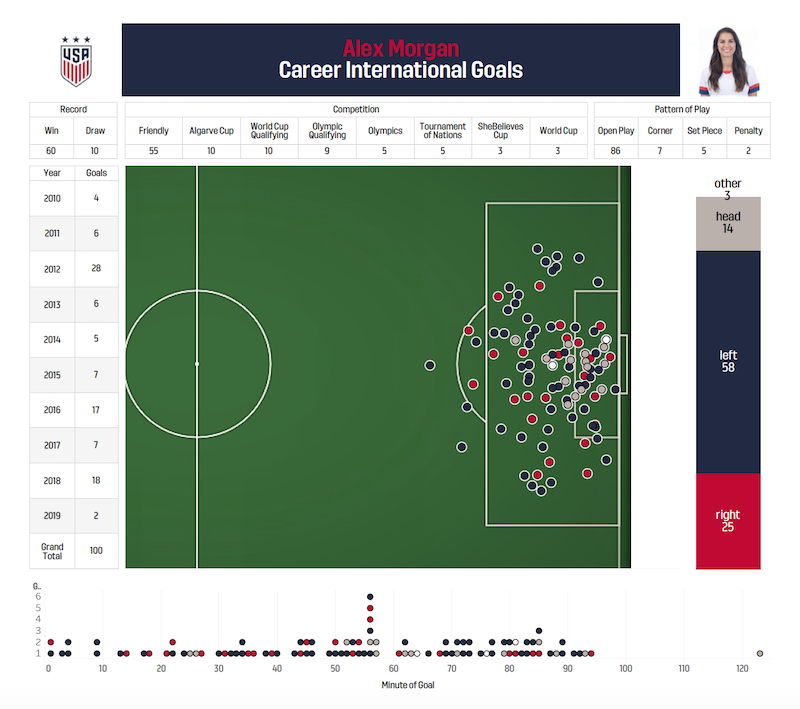 The goal was spectacular, and classic Morgan, who out-muscled a defender on a long ball over the top, putting her to the turf before racing at a break-neck speed toward goal. Morgan side-stepped an Australia defender to make space for her shot and then slid to tuck the ball into the right side of the net. It put the USA up 1-0 and was a moment worthy of chills. In fact, it’s probably best if we let the video of the moment do the talking.

Starting in the latter part of 2017, Morgan embarked on a scoring streak that has featured 27 goals in 32 games. That run quickly sped up her journey to 100 but getting the last one took some time and patience. On Nov. 13, 2018 she scored goal 98 against Scotland. A little over three months later on Feb. 27 came goal No. 99 vs. Japan. And then it was a bit of a waiting game, albeit one of eager anticipation.

But this time, the wait wasn’t long and against Australia on April 4, Morgan earned her exclusive membership card to the Century Goal Club. 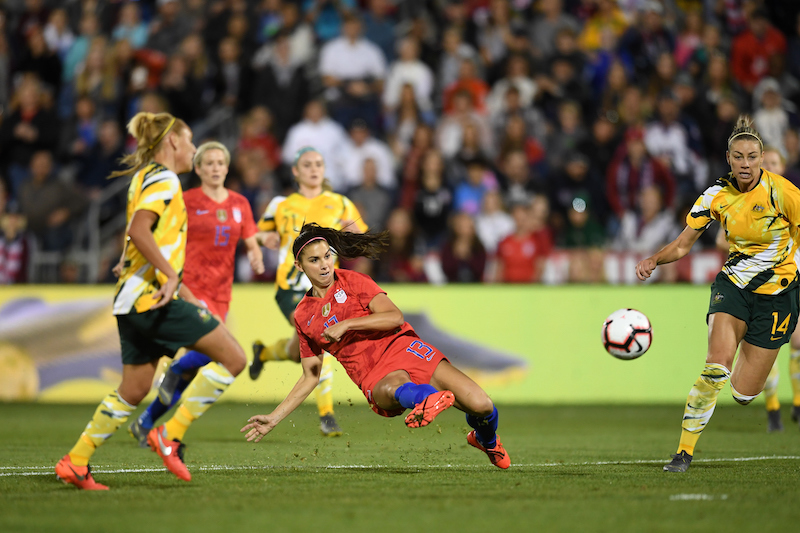 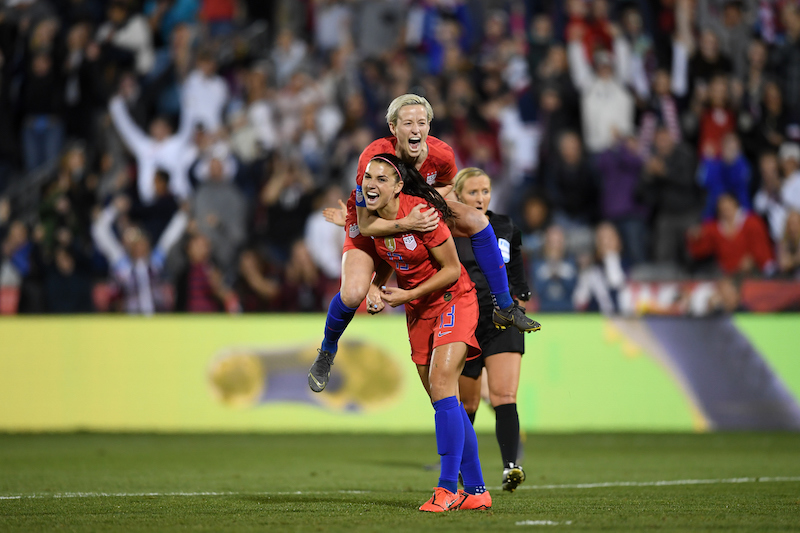 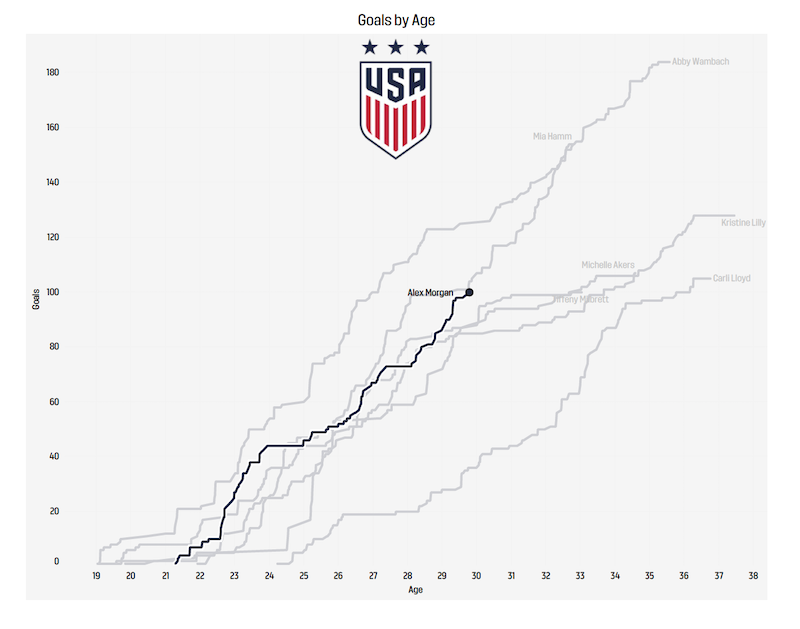 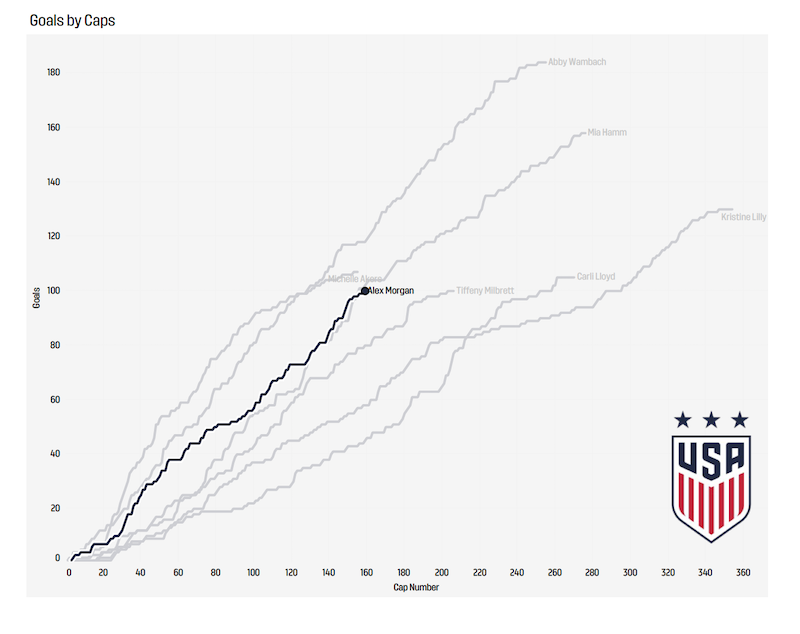 In the 34-year history of the U.S. WNT, there have been six players to reach 100 international goals.

“These women, they’re all legends,” Morgan said after the game while reflecting on her journey to 100. “They’ve all done so much for the women’s game. It’s incredible to be amongst them.” 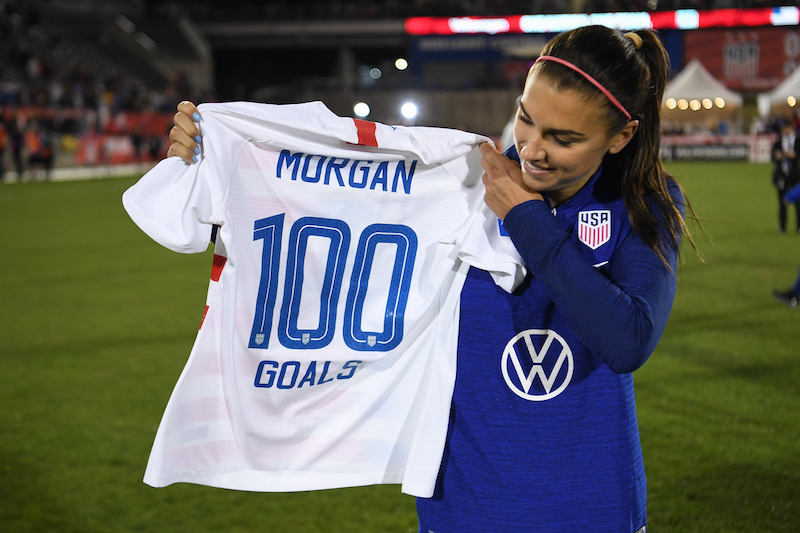 On Thursday in Colorado, Morgan also tied Milbrett for sixth place on the all-time scoring list. Milbrett was at the game – she coaches for the Colorado Rapids Youth Soccer Club – thus bringing past and present together and furthering the tradition of success that is embedded in the DNA of the WNT. Morgan knew that she was in the stands, so for her, it made the moment even more special.

“Tiffeny Milbrett was in the stands today and she’s at 100 and it was so cool to have her witness that, and I wished I could have said hi to her, but just to be listed with her and the other five women is a great accomplishment.”

About nine years ago, a 21-year old Alex Morgan scored her first international goal for the U.S. WNT. It was against China PR in the 83rd minute off an assist from Abby Wambach. She shot it with her left foot and in between two defenders.

On April 4, the now 29-year-old Morgan once again took the shot while on the run and flanked by a defender on both sides, but this time the shot was with her right foot and it was assisted by Crystal Dunn.

While the goals had their differences, in a way they were also very similar, and not only because they actually were similar, but because at the end of the day, all goals are important. But Morgan, more than anyone, understands that goals are but a means to an end. And the USA is hoping that end is in Lyon, France on July 7, 2019.

“My first goal actually wasn’t so different from this 100th goal, just a couple more touches,” Morgan said with a laugh after the game. “But as much as I love the No. 100, this team is so much more than a number.

“What I’m most looking for and what would mean so much more than the number 100 is coming come back from France with that World Cup title. I’m just so fortunate to play with these women every single day. I feel so empowered to be able to be here and feel like we’re inspiring the next generation.”

And with every goal Morgan and her teammates score, the inspiration continues to grow.