Kwadwo Poku’s reputation was born in the U.S. Open Cup.

“Chances come in this competition that you have to be ready to take,” said the dynamic Tampa Bay Rowdies midfielder who went from nobody to hot commodity in the 2014 edition of the competition. “It’s your chance, to show what you’re made of and to move up. To prove yourself.”

The Kumasi-born Ghanaian did just that five years ago when playing for second-tier Atlanta Silverbacks under Eric Wynalda, an avowed and unabashed advocate of the 106-year-old Open Cup and the magic it can conjure for clubs and players. “Eric saw that I had potential,” said Poku, who came to the States to chase a collegiate career before opting for the pro game. “He told me I could play at the highest level and he always stressed the Open Cup and how it was a place where I could prove who I was.”

Poku during his stint with NYCFC in Major LeagueSoccer

The Silverbacks, then of the North American Soccer League (NASL), roared to the Open Cup Quarterfinals in 2014, beating big boys Real Salt Lake and Colorado Rapids along the way. Poku scored a last-second winner in the Fourth Round against RSL that had MLS scouts and coaches drooling. Both physically imposing and nimble, he could grab a game by the scruff of the neck and shake it hard. “The career he has now was born in the Open Cup,” said Wynalda, the former U.S. National Team ace still alive in the 2019 Open Cup after his Las Vegas Lights beat the amateur club he used to coach, Cal FC.

Poku spent a season and a half at New York City FC, becoming a fan favorite in the club’s inaugural MLS campaign. But he returned to the NASL in 2016, unable to refuse a huge salary that dwarfed what he was making in the top flight. With Miami FC, Poku flexed his muscles once again in the Open Cup, not losing sight of the lessons he’d learned in Atlanta. “This tournament started my whole career,” said Poku, who dragged Miami FC to the Quarterfinals of the 2017 Open Cup, only to be knocked out by fellow second-tier side FC Cincinnati. “I played with my full heart and it changed my life.”

That Miami FC team was an ambitious outfit, part-owned by Italian legend Paolo Maldini and coached by fellow Azzuri hero Alessandro Nesta, who recognized Poku’s ability straight away. “He [Poku] has a different speed, a different gear,” said Nesta, whose achievements at the top levels of the game include a World Cup crown and Champions League medals. “When he starts to run and change the pace, you’re in trouble. “There’s no one who can run with him…maybe not in any league.” It’s high praise from one of the best players of his generation and proof of the kind of skill-set that led Wynalda to claim: “Poku’s the best player in the NASL and maybe too good for MLS.”

Poku, with one cap for Ghana’s national team, remembers that Miami FC Cup run fondly. The memories of knocking off Major League Soccer opposition like Orlando City and Atlanta United are still fresh. “We want to go against an MLS team here in Tampa Bay,” said Poku, who faces USL Championship league mates OKC Energy on the road in the Third Round on May 29. “Nesta was so hard on us in Miami and he didn’t give out praise easily, but when we beat Orlando, you could see it on his face. He was so pleased and proud of us. The aim is always to play the big guys. To win and go as high as you can.”

No longer an anonymous midfielder hungry for opportunities and hunting chances, Poku’s eager to make a deep run with his high-flying Rowdies. They’re undefeated at the top of the USL Championship standings with six wins and five draws from eleven games. And a comprehensive 4-1 win over summer-league amateurs The Villages (USL League Two) set Tampa Bay on their way to a Third-Round berth. Poku was alarmingly good in that game. He controlled midfield and accelerated through the lines. He held the line too, when needed. Even against college kids, he didn’t hold back. It’s not in his nature.

“If I’m in there, I’m playing with my heart all the way out,” said Poku, who knows the danger of a hungry underdog better than most. “I told the guys in the locker room before The Villages game, ‘this can be the hardest game of your career because these guys will be so hungry, so desperate to show what they can do’.”

Poku sees the upcoming Third Rounder against the Energy as a turning point.

A Chance to Shine

“We’ve got to approach the game against OKC holding nothing back because if we win we get a shot at the big boys and at that point everything changes,” said Poku, his West African accent thinning with every day he spends in the States. “The Cup is something that means a lot to me and this is our chance to go and show what we can do. It means a lot to me and to every other player here.” 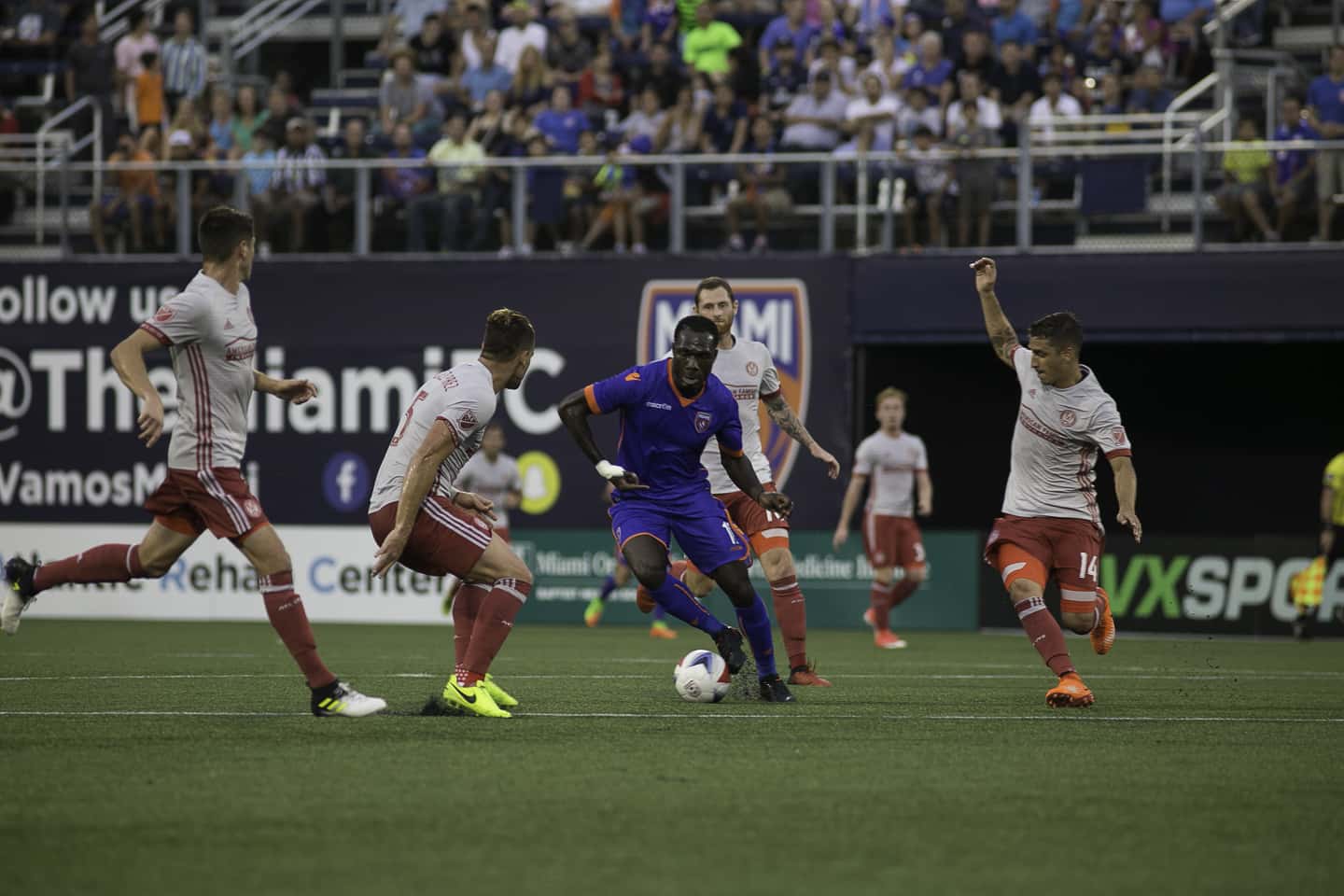 It’s been 19 years since a team from outside MLS has won the Open Cup. Poku and his teammates, from young guns like 22-year-old Panama striker Juan Tejada to experienced campaigners like goalkeeper Chris Kanopka (35), sense something special might be afoot in Tampa. “If we keep out mindset right, I think we can go all the way,” said Poku, channeling the spirit Wynalda – his mentor and potential opponent in later rounds. “We have the potential with the guys we have and I think we really stand a chance.

“But weird things happen too,” added this formidable player who knows all too well the stresses and strains, the fickleness of the Open Cup. He’s careful to check himself. “Once you start playing teams above you, you feel that feeling that you have nothing to lose. But there’s still a long way to go and anything can happen.”