The Old Ghosts of San Francisco
Without Boxer Stadium, there’d be no Children’s Mercy Park in Kansas City. No Allianz Field in St. Paul. You’d have none of your gleaming, glittering tributes to the strides soccer’s made in America without this old ground. It was built in 1953 and it ain’t pretty. The grass is long and patched with dandelions. Weeds grow through the cracks in the concrete grandstand. It’s the oldest soccer-specific stadium in the country. A West Coast version of New York City’s Metropolitan Oval, it’s where the ghosts of American soccer’s past – its brawls and all slender glories – whisper and mingle with the here and now. Sure, the wind whips through Boxer and you’d better bundle up. But oh how she looks out over the rooftops of the City by the Bay. Sixty-three years after her opening, Boxer’s still hosting U.S. Open Cup games.

It only takes one moment in #USOC2019 as @FFCFoxes move on with a 1-0 victory against @elfarolito_npsl pic.twitter.com/ZMSNVvSajJ

Most recently on Boxer’s bumpy pitch, El Farolito, semi-pro strivers with history and pedigree, stretched the visiting pros from Fresno. The tackles were vicious. The play was slow, deliberate on that long grass. Skillful. One mistake was always going to decide it. In the end, El Farolito’s goalkeeper Luis Castro dropped the ball. It fell to the wrong foot. And that was that. Boxer Stadium doesn’t play favorites. She’s just a witness to what the game was, is and might become still.

Wynalda’s Past, Present & Future
Eric Wynalda knocked Cal FC out of the Open Cup. It was almost Biblical. He built that team of unknowns and left-behinds from greater LA into a unit, and on one given night in 2012, they took down the Portland Timbers of Major League Soccer. But before you tar and feather the man, Wynalda’s no sell-out. Not a chance. He’s still that same old avowed evangelist of the Open Cup, its underdogs and opportunities, the warm hand it puts on the shoulder of those who believe in impossible things. His current side, the Las Vegas Lights of the USL Championship, have something of the Bad News Bears about them. From Sammy Ochoa, still wily but paunchy and nearing the end, to fiery winger Pablo Cruz, one of six players Wynalda brought with him from Cal FC. The Lights wear garish neon and keep a pair of lovely llamas, Dolly and Dotty, as mascots. Hoopla aside, the Open Cup Second Round game played at Cashman Field in downtown Vegas, between Cal FC and Las Vegas Lights, was about as devoted to attack and style and fire, as any you’re likely to see. 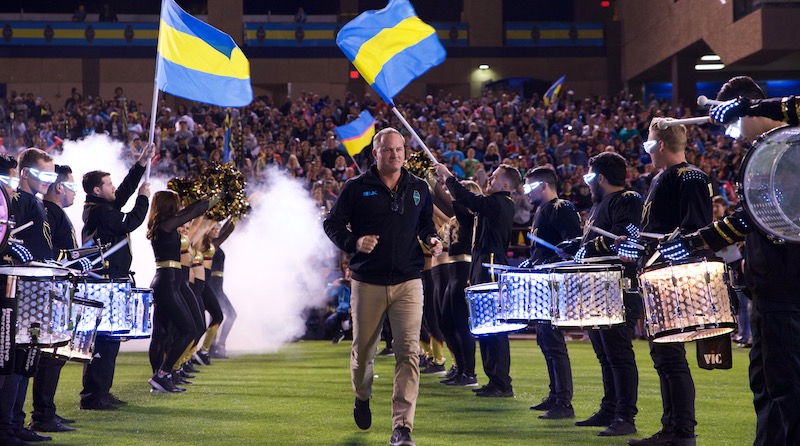 When Eric Wynalda’s past and present met, we all hit the jackpot. What of his future, you ask? A date at that same old baseball stadium off the Strip against another amateur side, Orange County FC. They’re led by Wynalda’s old USA teammate Paul Caligiuri. Will we never escape the past?

Live By the Shootout…
Des Moines Menace goalkeeper Jordan Bell rescued his team in the First Round. His psych-out head games upset Duluth FC. He leapt on the line and rattled the crossbar during that shootout last week. And it worked. But he ran out of mojo this time. He pressed his luck in front of that same goal where he tripped up the brittle Minnesotans. Against Saint Louis FC’s pros, Bell’s antics went stale. He had the air of a one-hit wonder playing that same old tune for old time’s sake. Was there anything at all written on the crib sheet he kept in his sock and consulted before every kick? Was it just an elaborate scam? If so, how delicious. The yellow card Bell earned may not be the first-ever shown in an Open Cup shootout, but you don’t see its ilk every day. He spent so much time and energy trying to get in the kickers’ heads, he forgot to make his saves. Bell got his hands to the first shot and should have kept it out. But on this night, he saved none while his counterpart – 18 year-old Patrick Schulte – was the one with the hot hands. The skinny youngster saved three of four before earning a big hug from his mom and grandma, who came out to watch their boy’s first pro start.

Teachers, Students & Open Cup Lessons
Chas Wilson, a social studies teacher at West Chester Henderson High School in suburban PA, put his hand up in the air in celebration. He’d scored again for his West Chester Predators; this time against pros Birmingham Legion. It was only consolation, but it was a salute to all those landscapers, laborers and nine-to-fivers out there who still play the game because they love it. Because of the sheer joy of it. His hand went up in salute to his students, who he teaches from beyond the classroom in this 106-year-old soccer tournament. They’re simple, enduring lessons. Chase your dreams, his hand in the air seemed to say. Don’t make excuses. Don’t give up. Not all victories are wins.

Elsewhere, in Nashville, Kobe Perez of South Georgia Tormenta FC 2 missed his high school graduation to play in an Open Cup game. He lost, 2-3 to pro side Nashville SC. And he missed out on those caps and gowns – that special, bittersweet day of hugs and endings and new beginnings. Let’s not worry, though, for what’s won and lost isn’t always tallied on the scoreboard.

Cup Dreams & Soccer Soldiers
It wasn’t possible. It must have been a dream. The whole thing. It was a nightmare back-pass for Charlotte Independence defender Hassan Ndam, who laid the ball into the loose space between himself and his keeper. It was a dream-come-true for Valentin Sabella, who raced onto the gift, around the ‘keeper and slotted home. There were just two minutes left in extra-time. The score was 2-2 now and penalties loomed. “What is happening?!” ESPN+ analyst Bobby Warshaw shouted in wonder and despair and disbelief. What was happening was the essence of the Open Cup. Florida’s amateur Soccer Soldiers, down a man for many minutes, were on their way to beating their second pro team in the 2019 tournament and capturing our imagination with their cheek and style and guts. “This makes no sense!” Warshaw, who knew the Open Cup as a player, screamed as the Soccer Soldiers moved on against all logic and heavy odds. He sounded almost resigned by the end. “This is the Open Cup,” he conceded, his voice withered from the excitement. It is indeed. More, please. 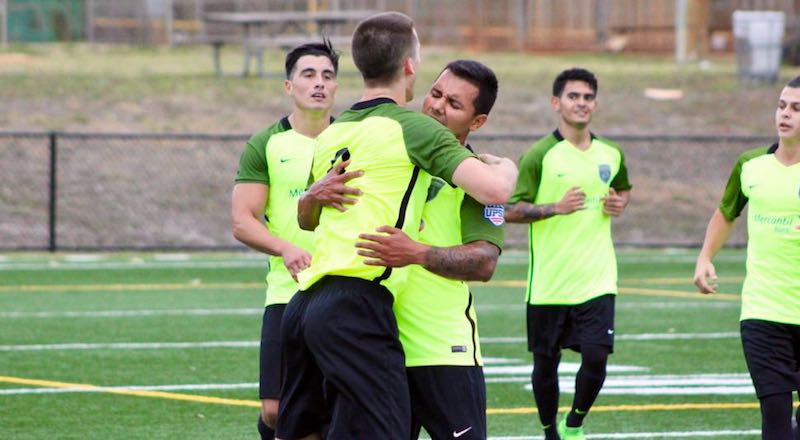 Soccer in a Baseball World
You can still see the shadow of the pitcher’s mound. It stains the grass like a shipwreck under the water. A vestigial infield cuts through the pitch’s flank like a wound. There’s something awkward about these abandoned baseball stadiums – Cashman in Vegas, the one in El Paso, Memphis and Al Lang Stadium in Tampa Bay. But these old ghosts have something to say. Something mournful about where we’ve been as a country and where we’re heading. Like the train whistles that sounded from passing engines in Pittsburgh, on the Monongahela River, beside the magnificent soccer specific home of the Pittsburgh Riverhounds. And in Little Rock in Arkansas, which saw its first Open Cup game since the tournament began in 1914. These are the sounds and sights of the last century, one where the Open Cup survived, awkwardly at times. Is it also a glimpse of soccer’s bright future in these United States?

Too Close to Call
It was just too close in Orange County. Literally. When you say Orange County SC and Orange County FC out loud on TV, the two names sound exactly the same. So the ESPN+ commentators came up with a system: Orange County Blues and Orange County Blacks. An elegant workaround and one suited to the Open Cup’s spirit of improvisation. These two teams, one amateur and one pro, could not be separated. After 90 minutes, they were too close, tangled at 2-2. After 120 minutes, still they were tied. It seemed fitting, in the end, for the fate of two teams separated by just one single letter of the alphabet, who share the same stadium every weekend, to be decided by a shootout. And the amateurs won.

If the first edition is anything to go by, the 🍊 County Derby is going to become a classic. 2-2 after 120 minutes, amateur @ocfcsoccer edged all-pro @orangecountysc on PKs to book a date in the Third Round against @lvlightsfc.

A Fond Farewell
In among the upsets and the dreams, we’d be wrong not to spare a thought for those clubs who took their leave. With every rise, a fall – this is the Open Cup after all. There’s no winner without a loser. No draws here. Nothing to share. You NTX Rayados, we’re sad you’re gone. You showed us your style and class, and even cancelled flights and flat tires couldn’t stop you. West Chester’s Predators, you ruled the road and are closer for it. The Villages, the Buffalo from Central Florida, we’re sure we’ll see you again too. Cal FC’s Richie Menjivar and Danny Barrera – those heroes of 2012 – you remind us that anything is possible in the Open Cup. For those we’ve lost, know you’ve all done your part.