West Chester United SC (aka the Predators) are no strangers to long road trips (and driving themselves). They're also among the top amateur teams in the country and looking to make waves at the 2019 U.S. Open Cup.
By Frank Dell’ApaMay 6 2019
Open Cup

When Jose Mourinho talked about parking the bus with Chelsea FC, jokesters had a field day photo-shopping him behind the wheel. But for the West Chester United SC (aka the Predators), it is no laughing matter for Blaise Santangelo to plan both team tactics and travel and, yes, climb into the driver’s seat for a road trip.

“Look, I do everything,” Santangelo said. “From the laundry – make sure they have fresh and clean kits, everything is there waiting for them – everything I can do to make these guys feel like they’re a pro club, even though we have amateur status.”

Santangelo’s multi-tasking paid off in the Predators’ 3-0 win over Safira FC in the final Lamar Hunt U.S. Open Cup play-in game on April 7. The Predators loaded into two Suburban SUVs for the six-hour drive to Somerville, Mass. Then, they followed Santangelo’s strategy, capitalizing on the narrow dimensions of Dilboy Field to score on a corner kick, free kick and throw-in. 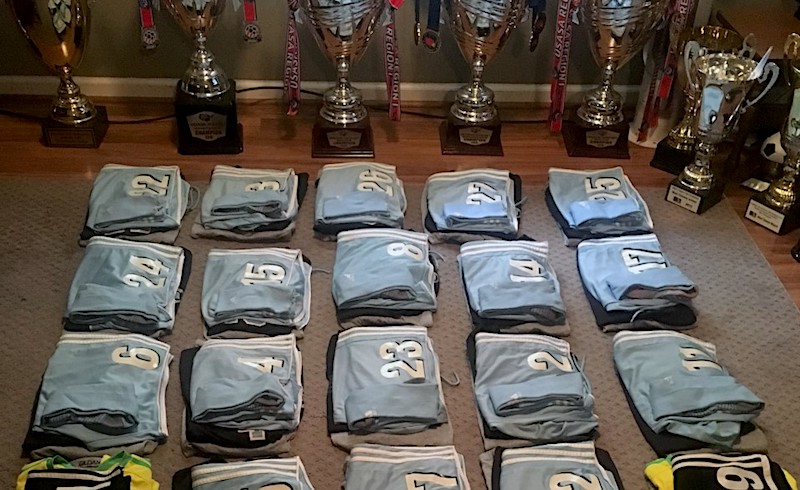 Now, Santangelo, West Chester’s head coach and director of the Men’s Elite Program, is preparing for a 2019 Lamar Hunt U.S. Open Cup First Round match against FC Baltimore Christos at Homewood Field at John’s Hopkins University at 7:45 p.m. Tuesday, May 7. The Predators’ road to their second appearance in the tournament began with wins over local rivals Vereinigung Erzgebirge and Ukrainian Nationals, continuing against the New York Pancyprian Freedoms and Safira. A victory over Baltimore would qualify the Predators to meet the Birmingham Legion, a sixth successive road game, the trip to Alabama their fifth state on the U.S. Open Cup trail.

On the Road Again
“It’s a bummer we’re on the road yet again,” West Chester defender Peter Nolan said. “It’s almost unfathomable to think we’ve been on the road every game. It’s not a motivating factor but it makes things difficult, with logistics and work. But Blaise [Santangelo] is a real-deal coach, plus he is good with logistics and he’s able to finance the team. And, because we’re young, we can get off the bus and not have any problem playing.”

The Predators range in age from 18-year-old Alex Kades, a high school student bound for the University of Pennsylvania, to Nolan, 30.

Nolan, who played at Kenyon College, has had a successful amateur career, playing for Boston’s GPS Omens team that took the Rochester Rhinos to the wire in a 1-0 extra time loss in the 2017 Open Cup. Nolan joined the Predators last year, but his time with them could be coming to an end as he recently accepted a position with a financial firm in New York. 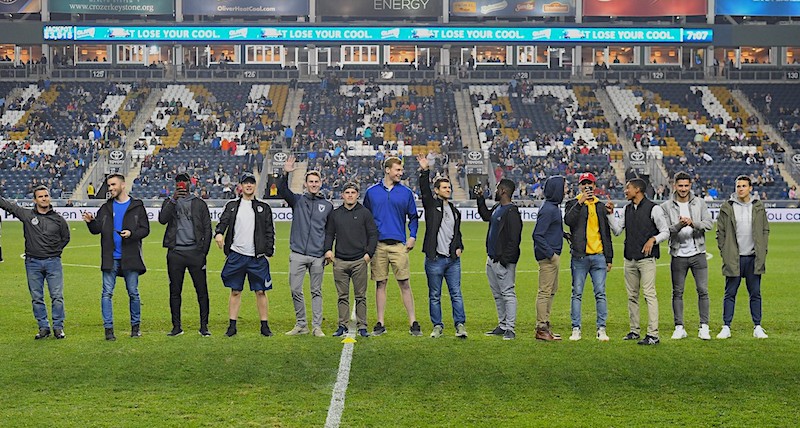 “This is special for different reasons, in many ways the opposite of GPS because the core of the team is [younger] guys,” Nolan said. “Many of them have ambitions to play professional soccer. They’re local kids, they’re talented, fit and intelligent.

“I think the sky’s the limit with these guys. They’ve put together as good a team as any I’ve played with. Hopefully, we can do the business in Baltimore.”

The Predators have re-tooled since winning the 2015 Werner Fricker Cup and reaching the second round of the 2016 U.S. Open Cup. Only forward Chas Wilson, a 27-year-old teacher at Henderson High School, remains from those West Chester teams.

“I would say we’re deeper top to bottom, but that team had great role models, leaders,” Santangelo said of past Predator squads. “This team is young, average age 23. Someone reminded me of the Spartans – they didn’t want to train so much, they just wanted to go to war. And that’s kind of how these guys are. They have that road warrior mentality. They’re just not going to let being on the road be a problem.

“A lot of them play in the NPSL, so there’s travel there, as well. We kind of know how to do it, we do a lot of traveling around.” 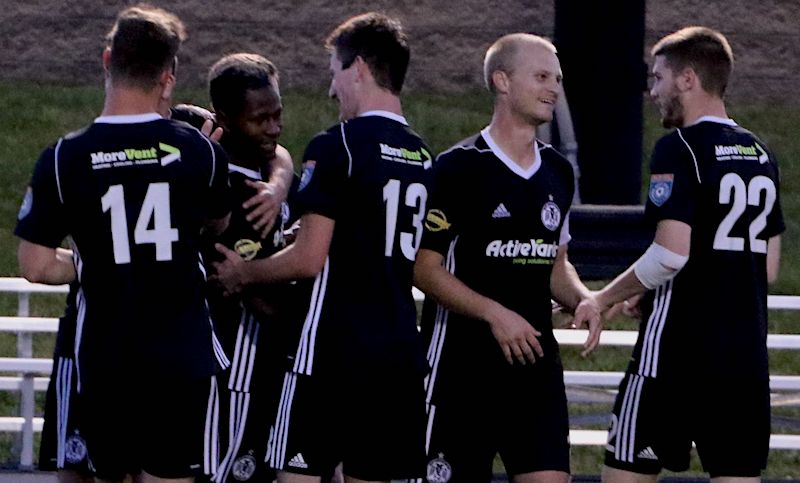 Santangelo describes Wilson as “a wise old soul at the young age of 27.” Wilson performed at West Chester State, and is a starting forward with the Predators, though he has filled in on the back line, on the wing, and in central midfield.

The Predators’ captain is Mike Gonzalez, who played for Lehigh and Penn State and now works in finance. Defenders include Enda O’Neill, a former Colorado Rapids Academy, University of Wisconsin and Villanova player whose brother, Shane, plays for Orlando City SC of Major League Soccer (MLS). Andreas “Dre” Bartosinski, who played for FC Koln’s junior teams and at Villanova, leads the midfield. Strikers include former Lock Haven State star Troy Amspacher and Matt Greer, formerly of the Philadelphia Union Academy, who will miss the Baltimore trip while finishing studies at Dartmouth.

Most of the current team competed in last year’s U.S. Amateur Cup final, a 2-0 away loss to the Milwaukee Bavarians.

Predators – 40 Years on the Hunt
“West Chester has been around for 40 years, and we went to the Open level seven years ago,” said Santangelo, who played at Elizabethtown (Pa.) College. “The great thing about our program is we do have so much talent in our area. The Philadelphia Union Academy is right down the road. Playing in the NPSL has helped out a tremendous amount. We’ve won the [United Soccer League of Pennsylvania], one of the oldest amateur leagues in the country, the last three years. We were 53-0-3 before we lost to United German Hungarians.”

Several Predator players have performed as guest players with Bethlehem Steel. The Predators even took a 1-0 win over Bethlehem in a practice game in West Chester. 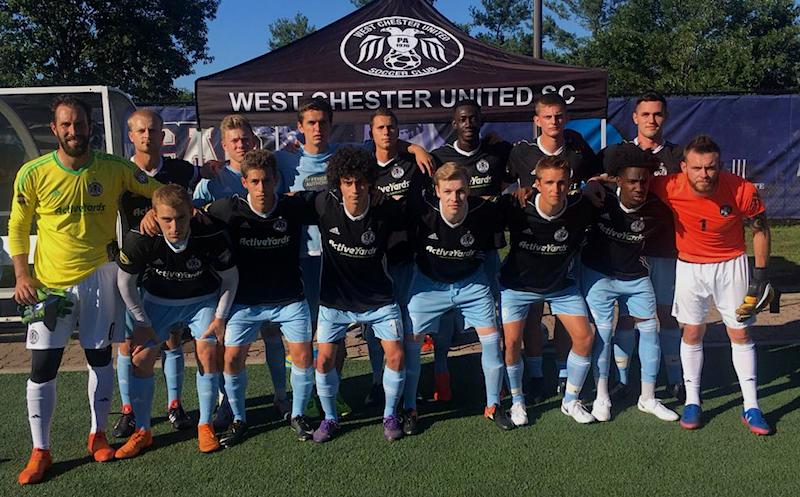 “We do a lot of training,” Santangelo said recently in a telephone interview while driving to an 8 p.m. practice session. “A lot of them are young professionals who could’ve gone pro but have decided to play amateur at a high level. They are young professionals making a good living and this is something they’ve decided to do – they know we’re real serious about this.”

The Predators’ Open Cup campaign in 2016 included a penalty shootout win at Fredericksburg SC in Virginia and a 3-1 loss to the Harrisburg City Islanders before a crowd of 3,000 at West Chester’s Kildare’s Turf Field.

If the Predators can keep this run going, there is a chance they will be able to cut down on travel. MLS teams enter the competition in the Fourth Round and Santangelo is optimistic about the Predators’ chances. The Union’s Talen Energy Stadium is located within a half hour drive of West Chester, but Santangelo has other ideas.

“I keep threatening the Union,” Santangelo said through a crackling phone line. “They are going to have to come to our place to play.”