Jonah FontelaMay 14 2019
Open Cup
AN EVANGELIST FOR THE U.S. OPEN CUP & ITS UNDERDOG OPPORTUNITIES, ERIC WYNALDA NOW FINDS HIMSELF ON THE SIDE OF THE FAVORITE, WHEN HIS NEW CLUB LAS VEGAS LIGHTS PLAY HOST TO CAL FC, THE AMATEUR TEAM HE INSPIRED TO GLORIOUS GIANT-KILLING HEIGHTS IN 2012.

Eric Wynalda will have to face his past.

He coached the last amateur side to beat a Division I professional team in the U.S. Open Cup. It was in 2012, when he was at the helm of Cal FC. Wynalda wasn’t at Jeld-Wen Field on that fateful day in May, he was on assignment in Europe for his day-job as a TV soccer pundit, but he was very much the architect. He plucked players, talents like Richie Menjivar and Danny Barrera, unknown outside of LA’s fertile amateur soccer scene, and helped them believe anything’s possible.

Seven years later, Wynalda’s on the other side of the looking glass. As coach of professional side Las Vegas Lights, who play in Division II, known now as the USL Championship, he welcomes that same Cal FC for a Second Round date in the 2019 Lamar Hunt U.S. Open Cup on May 14 (7:30 p.m. PT; ESPN+). 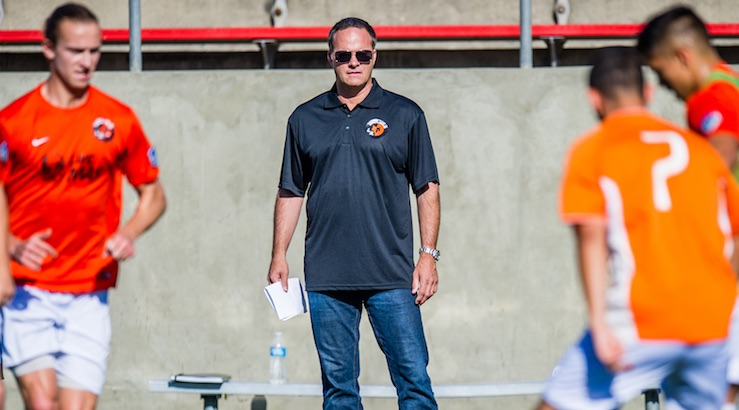 (Wynalda during his last stint in the Open Cup, with LA Wolves in 2017)
Now Barrera is back to face his old mentor, so too is Menjivar.
“Eric Wynalda jump-started my career,” said Menjivar, now a full international with El Salvador, who’s had pro stints in Denmark, in New York with the Cosmos and Penn FC – to name only a few. “That 2012 [Cal FC] team was just tons of fun. All the players knew each other from way back and it felt like playing in your backyard with your friends. The chemistry was so good that it really showed on the field.”

Wynalda fostered that critical chemistry, to help make the players believe what might have sounded, even to them, like a fantasy. “He [Wynalda] had so much knowledge of the game, and I tried to soak it all up,” added Menjivar, who’s been capped 41 times for El Savaldor’s national team. “We were a very talented group of players and in a lot of ways, he just let us play. He made the right adjustments, but he believed in us.”
“When we went to Portland, we didn’t really have any expectations, the guys just wanted to be out there and soak it in,” added Menjivar, who Wynalda brought with him to the Atlanta Silverbacks when he took over the Georgia club later in 2012. “We just wanted to enjoy what we did. We didn’t have any pressure that day – and that was the best part. We had such a great fighting spirit. I was sore for days after that game [a 1-0 win in extra-time of a game in which Cal was out-shot 37-8].” 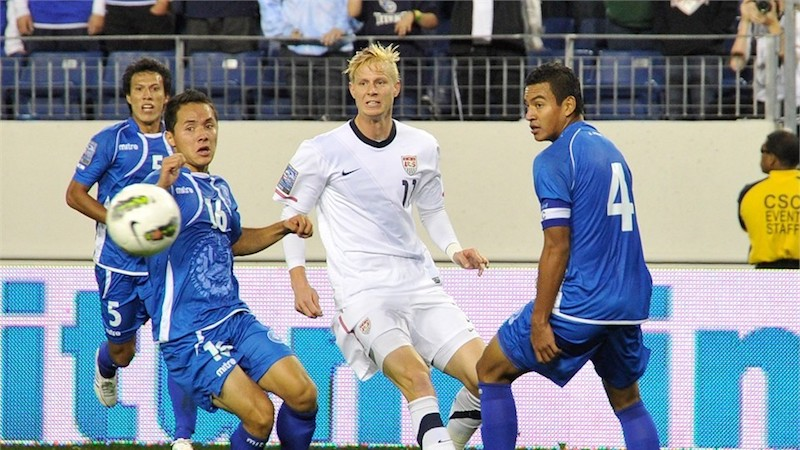 (Richie Menjivar - 16 - in action for El Salvador against the USA)
Coach Wynalda, who famously likes to say things like, “Professional isn’t always better,” now finds himself in a different pair of shoes. An Open Cup evangelist, he’s on the wrong side of a potential Cupset to the team he made famous as Cupsetters.
He won’t be worried. He won’t be rattled. He’ll be prepared and professional. It’s fair to say, Wynalda does things his own way. Always has. From his playing days, when he was among the first Americans to try their luck abroad, to today, spouting big opinions on TV, Wynalda’s very much his own man. But the Southern California native, a legend of the American game who can come off as smug and coarse in the pundits’ booth, has a secret. He cares. A lot. About players, those little moments in the game that can change lives, and the romance of the Lamar Hunt U.S. Open Cup.

“The Open Cup is about something intensely American,” said Wynalda, who last coached in the Open Cup when he was in charge of LA’s amateur Wolves in 2017 before taking over the Lights, of the USL Championship last year. “It’s about opportunity. There are opportunities for guys who come from outside the lines. You get an opportunity to show you’re good enough to play with the best. You get to show the strength of one game and one day. One little moment in time.”
Wynalda seems to live for that precise moment, that instant when you either take a chance or waste it. He knows about opportunities too, having scored 34 goals for the U.S. National Team over 106 caps. Quick and rangy, he was predatory – an opportunistic striker with swagger and attitude. He lined up at all three World Cups in the 1990s and was a poster boy for that formative period in the American game. 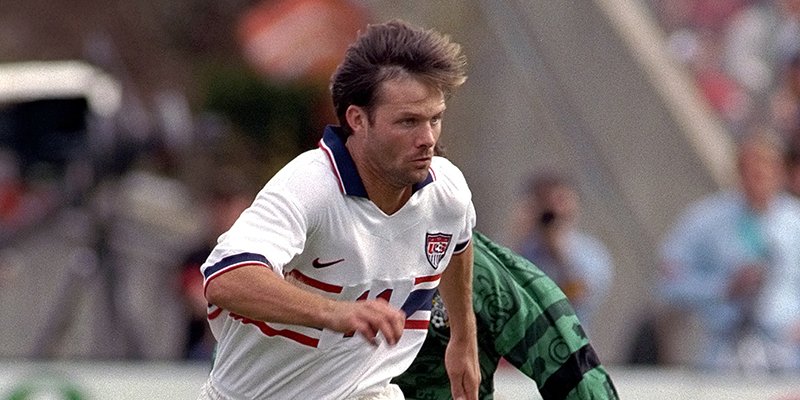 (Eric Wynalda is a legend of American soccer - here in action against Mexico)
His coaching career so far has blossomed, perhaps predictably, in the wild and unregulated spaces of the Open Cup. It’s a competition where you lose and you’re out. It’s built to be dramatic, with no draws tolerated. It’s a purist’s dream and a romantic’s delight. Wynalda, who scored the first goal in Major League Soccer’s history, never won the Open Cup as a player, but he went to a semi-final with Chicago Fire and was a runner-up with the now-defunct Miami Fusion.
As head coach of Cal FC, he assembled and guided an amateur side to the Fourth Round of the Open Cup. He still remembers Menjivar fondly, as player does coach. “He was just a kid in a t-shirt and old jeans who was pretty good on the ball,” Wynalda said. “And he took his chance with Cal FC with both hands. Games like that are what I live for; when players realize in the middle of the game, ‘hey I can do this. I can be somebody in this game’.”

For Wynalda, that success, which included wins over professional sides Wilmington Hammerheads (USL) before the famous Portland Timbers win, wasn’t about the broad strokes of a team “punching above their weight,” a phrase he thinks is more about marketing than soccer. “They strove to do something wonderful,” he said. “To have a day, a moment in time, that belonged only to them.”

Two years later, in 2014 with the Silverbacks, Wynalda pulled off a pair of wins over MLS teams Real Salt Lake and Colorado Rapids before losing in the quarter-finals to four-time champions Chicago Fire. Jaime Chavez and Kwadwo Poku were in Wynalda’s team for that wild ride and now both are cashing big paychecks with giants Miami FC. “I wouldn’t trade the sound of that locker-room after we beat the Rapids for anything in the world,” said Wynalda, speaking slowly and with genuine emotion.
“In the Open Cup, good things will happen if you honor the moment and live up to it,” Wynalda said, a few years back, unwittingly giving advice to the team he’ll want to beat in the Second Round of the 2019 edition of the 106-year old tournament. “They need to own the moment. They have nothing to lose at all.” 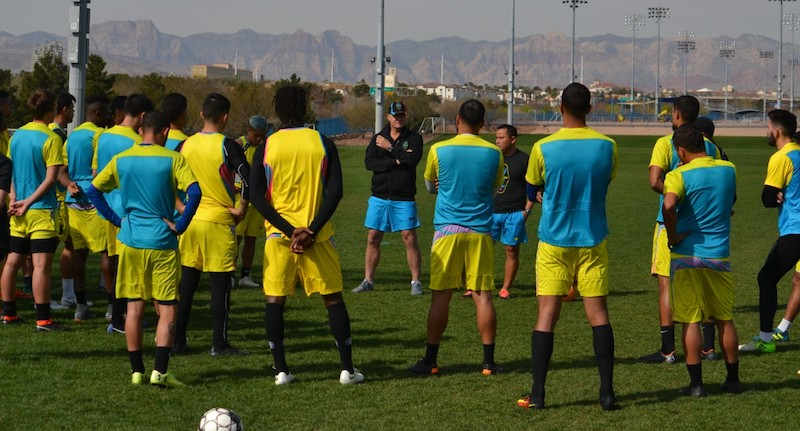 (A proud son of Southern California, Wynalda's loyalties will be tested in the clash with Cal FC)
It’s all a little strange. For Wynalda to be on the side of the favorite. It’s a little cruel too. An advocate for underdogs and the kind of self-belief that can slay Goliaths and start careers in the game, he’ll have all the pressure on him this Tuesday at Cashman Field – not far from the glitz and glamor of Vegas’s famed strip.
We still don’t have the pressure on us,” said Menjivar, back with a team as comfortable for him as an old threadbare t-shirt. “They’re pro, division two, and we’re just an amateur team trying to make some noise in the Open Cup. But that’s the beauty of it. On paper it looks like we don’t have a chance to win the game, but anything can happen.”
Wynalda doesn’t need Menjivar to tell him that. He knows it in his bones.