First in the Nets

While standing among the spectators at Parc Olympique Lyonnais during the national anthem minutes before the United States met England in the 2019 Women's World Cup semifinals, Kim Wyant glanced toward the video board.

She noticed USWNT forward Alex Morgan singing, with her hand over her heart, head tilted back slightly, her eyes closed.

"Now, the totality of that moment was much bigger -- much, much bigger than when I was standing on the field in Italy in 1985. But I knew how she felt because I had been there too, not with 20, 40, 60 million people watching. I connected with her. That was really neat. That was pretty cool." 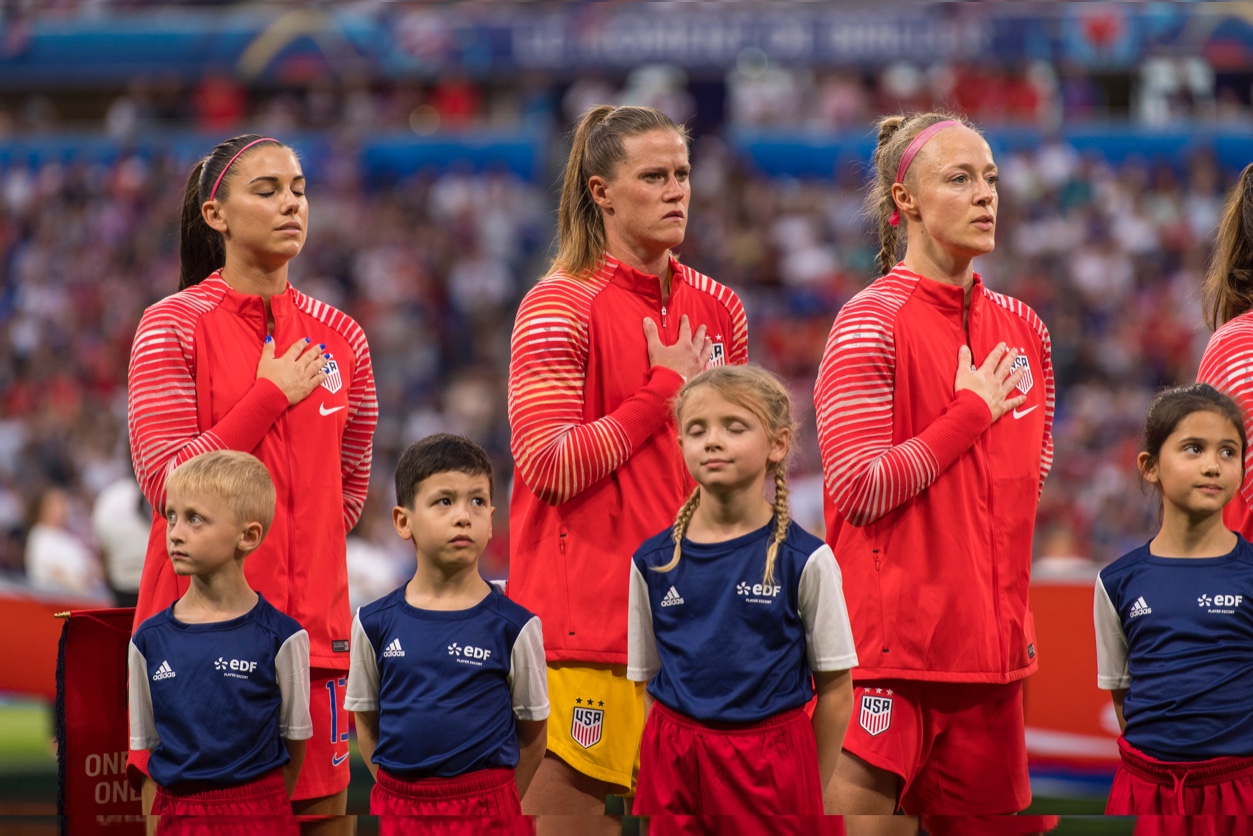 Wyant knew that unique feeling of pride for one's country and team as she experienced it for the first time 35 years ago. She was the goalkeeper among a group of pioneers who were in the starting lineup when the U.S. Women's National Team made its international debut on August 18, 1985 in Jesolo, Italy. "Still one of my most vivid memories," she said.

"I was very emotional, probably having tears in my eyes," Wyant added. "I had my hand over my heart, singing the national anthem. I felt very bonded to my teammates. Just the recognition that I was about to play in a game representing my country, it was very overwhelming. It was very special."

Wyant and her teammates laid the groundwork for Americans to compete in, excel in and dominate the international women's game. Those early days of the USWNT weren’t glamorous. No pro league, no opportunities for world championships or gold medals and no money.

Wyant, who has made a career of making history, had a late start on the soccer field. Hialeah High School (Fla.) didn’t field a team until her junior year. She loved playing sports, competing at volleyball in the fall, basketball in the winter and softball in the spring. When a coach asked her to try out for soccer, Wyant jumped at the opportunity.

After seeing how huge the field was on her first day of practice, Wyant made a wise choice for herself -- and eventually for U.S. Soccer -- to become a ‘keeper.

Though she did not have formal training, she learned to guard the net with her natural athletic ability.

"I was good at catching," she said, "so it was a position that I really relished. We were not very good. Actually, we were terrible. I remember playing games where we were unable to get the ball over the halfway line. That experience of getting clobbered every game, it really helped to develop my skills because I was very active. I made a lot of saves. I was doing it through natural ability and athleticism."

Wyant's saving graces did not go unnoticed. She joined a club team and earned regional recognition, and then a chance to play for the University of Central Florida.

Not only did Wyant start for head coach Jim Rudy's team as a freshman, she stood out, helping UCF reach the 1982 NCAA Division I Final against the University of North Carolina. The Knights fell 2-1, but she was named tournament MVP, a rare honor for a player from the losing side.

In those days, Regional Teams were used to select the first pool for the U.S. Women’s National Team. Squads from four parts of the country tussled at the 1985 National Sports Festival in Baton Rouge, La. The day after the tournament, players gathered in the stadium and sat in the penalty area. Officials announced a team was being selected to play in a tourney in Italy. 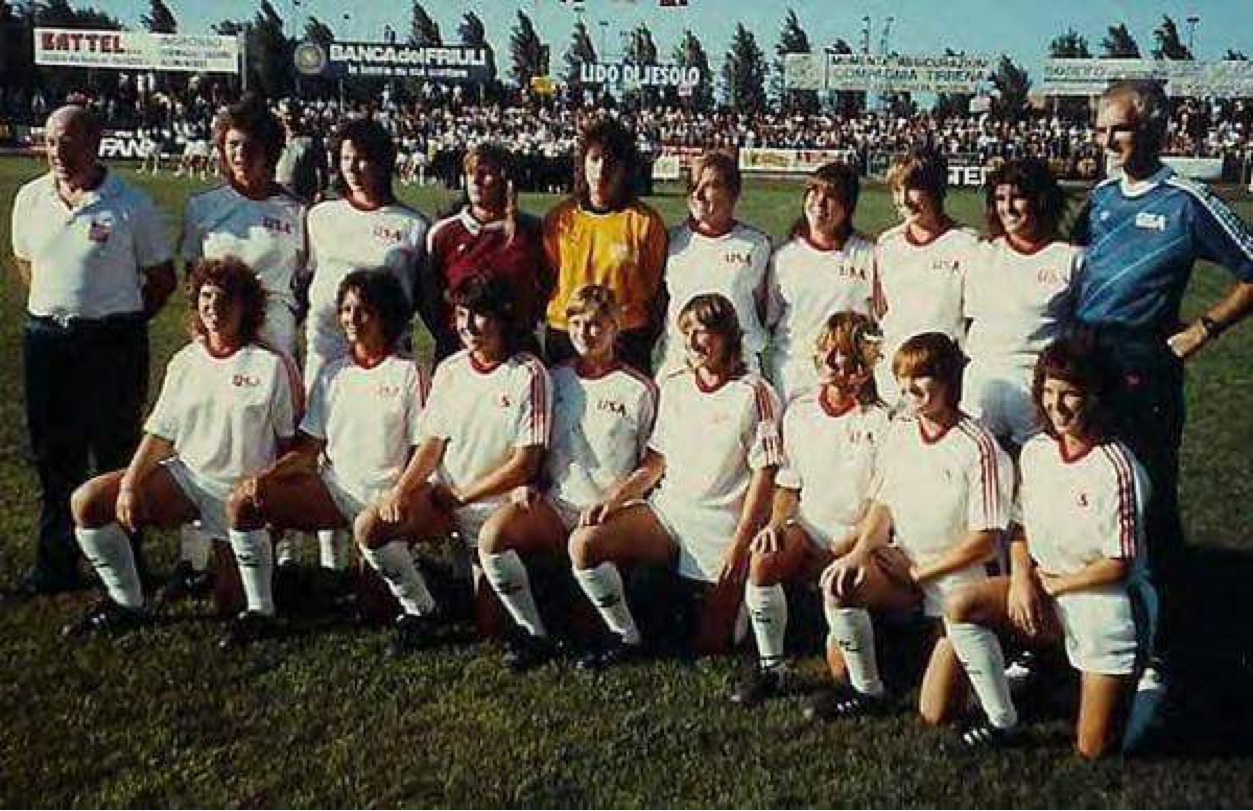 The USWNT made its international debut in 1985, playing four matches at the Mundialito in Jesolo, Italy.

"I think it was Mike Ryan [the first USWNT coach] who stood in front of all the players, and he read the 16 names that had been chosen for the first Women's National Team," Wyant said. “I don't know if I was nervous … just emotional. Things are done differently nowadays. Back then, they just read the names in front of everybody. Here's the team.”

An injured Michelle Akers did not play in the opener in Italy, but the striker played a role in helping to chronicle it. She sat in the stands as her former UCF teammate and current roommate asked her to take photos with her camera.

"She took a picture of us taking a picture. That's very cool," Wyant said. "Wow, Michelle Akers took these pictures sitting up in the stands. The greatest player on the women's side ever to play the game is the team photographer. Crazy when you think about it."

With no international experience, the players faced surprises and disappointment in a 1-0 loss to Italy.

"We thought we were talented, definitely," Wyant said. "We were all accomplished soccer players for 1985. You had several national champions on the team from UNC. We were organized. The word to describe what we were was maybe just naïve, because we were happy to be there. There was this thing called the Women's National Team. We get to play some international games. We get to play in Italy. There was just a lot of joy, curiosity and naivety around it because we didn't know what was in store for us.

"We left that first game disappointed. We would literally get fouled and pushed off the ball and there would be no call from the referee. We were outraged by that because we're Americans, we played by the rules. But when you look back, that was part of being naïve, that's part of the international game. That's the one of the hurdles you face when you play an international opponent on their home turf. There was definitely a learning curve for us." 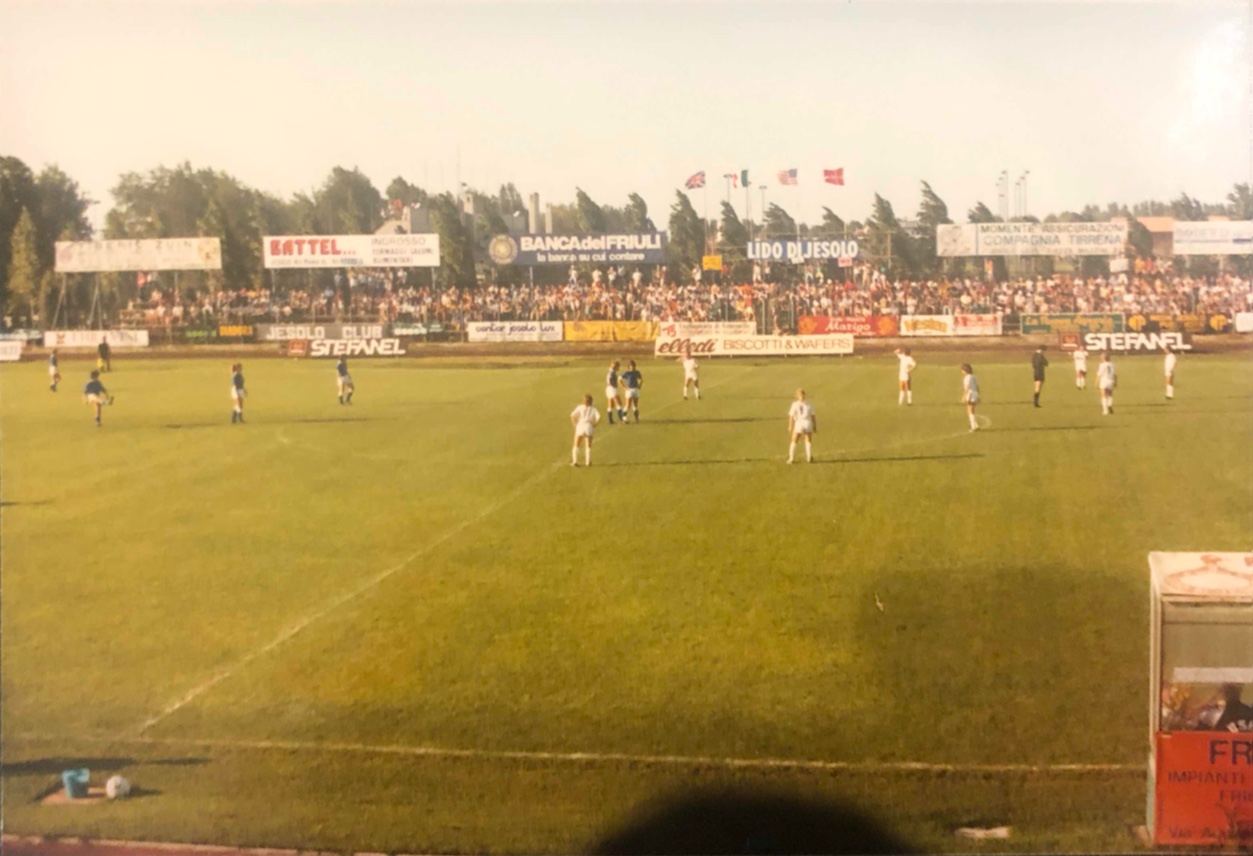 Kickoff of the first USWNT match vs Italy. Photo taken by Michelle Akers.

Simply getting to one game was an adventure as the bus driver got lost before a match against England. "We arrived at the stadium in time for the kickoff and they did not give us time to warm up, though we asked for extra time," said Wyant, adding that the USA dropped a 3-1 decision.

The team went 0-3-1, including a 2-2 draw and a 1-0 loss to Denmark. "By the end of the tournament we started to find our international legs," Wyant said.

A year later, on July 7, 1986, Wyant backstopped the USA's first win, a 2-0 triumph over Canada in Blaine, Minn. The joy of that milestone accomplishment was blunted by an ACL injury she suffered in a 2-1 loss to Canada two days later.

With talented goalkeepers on their way up, including Mary Harvey and Kim Maslin-Kammerdeiner, Wyant realized the road back would be difficult.

"That was a big setback," she said. "I was wondering how I was going to get back on the team, since women's soccer was non-existent on the senior level. It was a desert. I knew that kids who were in college and getting the benefit of a 20 or 25-game schedules were going to have the advantage."

Wyant did return to the National Team, recording nine total appearances, but never appeared in a World Cup or Olympics. 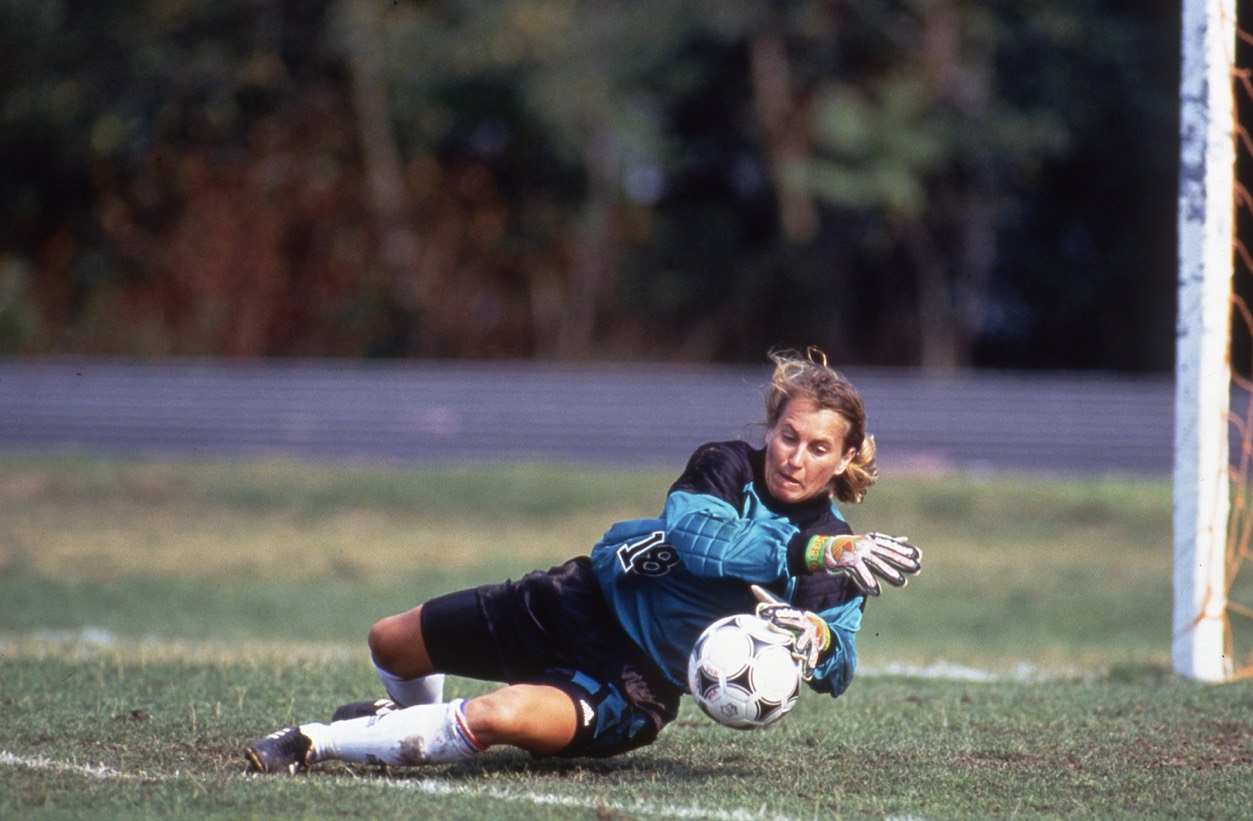 When one door closed, another opened. Chuck and Valerie Jacob created the Long Island Lady Riders, and Wyant signed with them. The Riders captured the 1995 and 1997 W-League championships. Wyant secured several honors, including championship MVP and goalkeeper of the year four consecutive times.

"The W-League breathed new life into my career," she said.

One of her crowning achievements wasn't even in a league game. Weeks prior to the 1999 Women's World Cup, the Riders played the Brazil Women’s National Team, posting a stunning 2-0 triumph against the team that would go on to finish third. Wyant was spectacular, denying Brazil three times during a seven-minute stretch in the second half.

"We gave them a good kick in the butt when they needed it," Wyant said. "They were winning pretty much up to that point so maybe it was a good reckoning. The loss probably benefited them immensely."

After retiring, Wyant, now 56, coached at the Lady Riders, Florida Atlantic University, Dowling College and at New York Athletic Club (W-League) before another opportunity of a lifetime knocked. Division III New York University needed a coach for the men’s team after Joe Behan resigned due to family health reasons one game into the 2015 season.

"I was not sure I would be making history because there are definitely other women who have coached men's sports in the NCAA. But I just knew the enormity of the moment because there's just more interest in women being in leadership roles in society. I knew this was going to be different because women were not coaching men's soccer in the NCAA. I knew it was going to be magnified because of the media environment we're in.”

"More pressing was the fact I was taking over a team that was one game into the season. That was definitely a very unique situation. It was a hard situation for the players and the school. That was going to be difficult for any coach, no matter what their gender was."

NYU finished the season 6-12. In 2018, Wyant directed the Violets into the NCAA Division III tournament, which made headlines as another first.

"I had only two recruiting classes," Wyant said. "For [the freshmen] to go through such a memorable moment and then to culminate their career after they stuck with me and through it, and in their senior season - they went to the NCAA tournament - that was probably my most gratifying coaching moment at NYU." 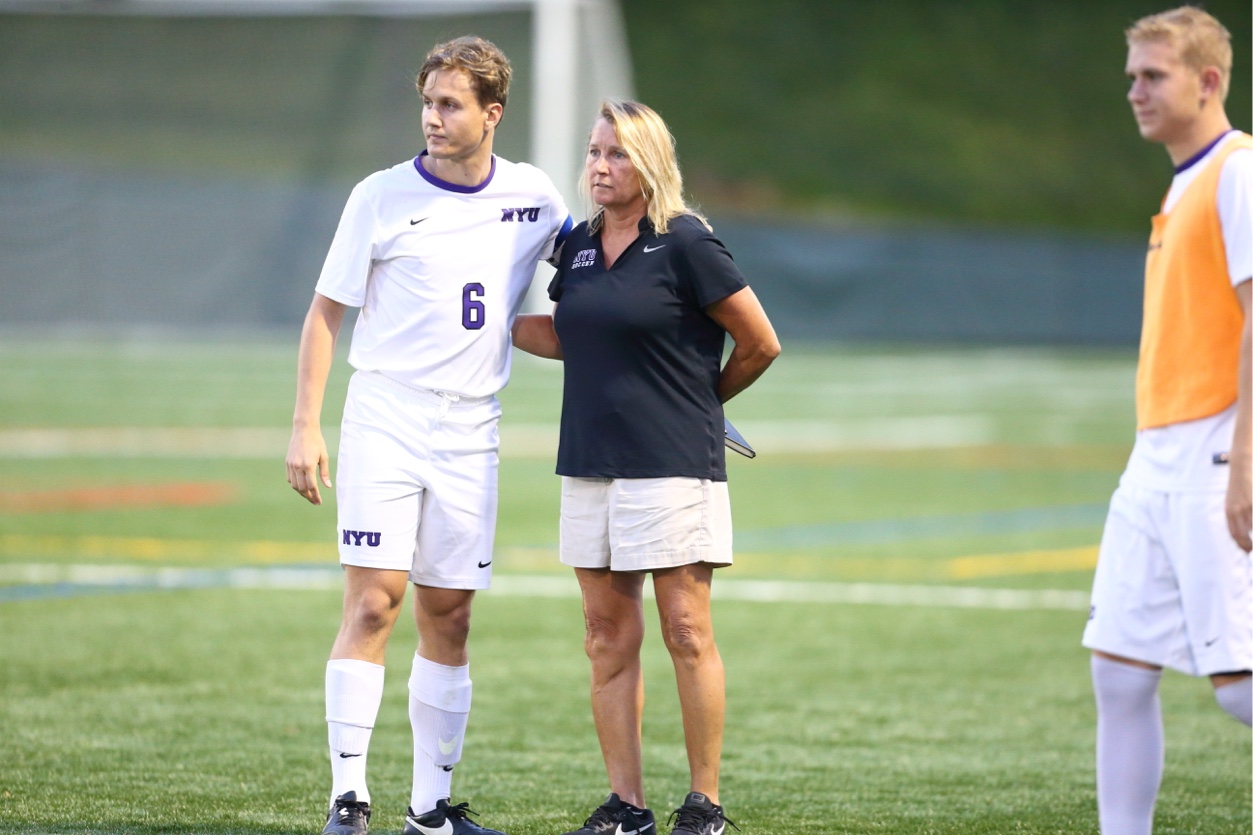 Even with all of this history, Wyant doesn’t think of herself as a pioneer. She claims that she has been in the right place at the right time.

“I'm just very grateful that I was in the time period where more opportunities were given to girls [and] women to use their talent -- and my talent happened to be a good athlete, a good soccer player -- which provided me with so much opportunity and opened up so many doors,” said Wyant, who was recently was appointed coach of Brooklyn City FC in the United Women’s Soccer league.

As for making an impact, Wyant is far from finished.

"I want to continue to make a difference," she said. "I am very happy at NYU and I still have a lot of work to do. I am always thinking, what's going to be my next move and how I am going to be prepared for it? It will be exciting to talk to you 10 years from now and to see where we've come and where we're going."