The daughter of an Air Force veteran, Col. James E. Thompson, who flew B-52 combat missions during the Vietnam War, Thompson was raised in the Denver suburb of Lakewood, Colo. with one eye on the skies and the other on the soccer field. Now a Coach Educator with U.S. Soccer, Thompson has been able to realize both those dreams while helping lift others to new heights in the process.


A former captain in the United States Air National Guard, Thompson now works as a Coach Educator with U.S. Soccer and creating revolutionary mentorship opportunities for women in soccer through her work with the Jill Ellis Scholarship Fund and the SheChampions Mentorship Program. Thompson, who heads the Coaching Education Department’s diversity initiatives, leads the mentorship program, which plays a critical part in U.S. Soccer’s goal of doubling the number of elite professional women's coaches by 2024.

"The mentorship program is something definitely that is near and dear to my heart," she said. "It’s the brainchild of one of the initiatives we started in coaching education. It is extremely important that I give back to the up and coming generations. Hopefully, the program will help inspire new generations that coaching is a viable career that you can do as a female."

Growing up in the game during the 1980s, Thompson had many mentors who helped her development as a player and then later her transition into a career in coaching. But something was notably absent.

Along with her success on the field, Thompson excelled in the classroom and was offered appointments to the Air Force Academy and West Point. She ultimately turned them down – and delayed her entry into the wild blue yonder – to follow her passion for soccer and pursue her dreams of playing at the highest level. At the time, that meant a prolific career at Colorado College, a women’s college powerhouse in the 1980s, and where Thompson collected All-American honors.

Another chance to fly came after college, when Thompson was presented with the prospect of joining the Air National Guard.

"I knew I could not pass up that opportunity again," she said. "So, I jumped at it."

Thompson joined the Air National Guard after Operation Desert Storm in 1991 and underwent 13 months of grueling training at Reese Air Force Base in Lubbock, Texas. 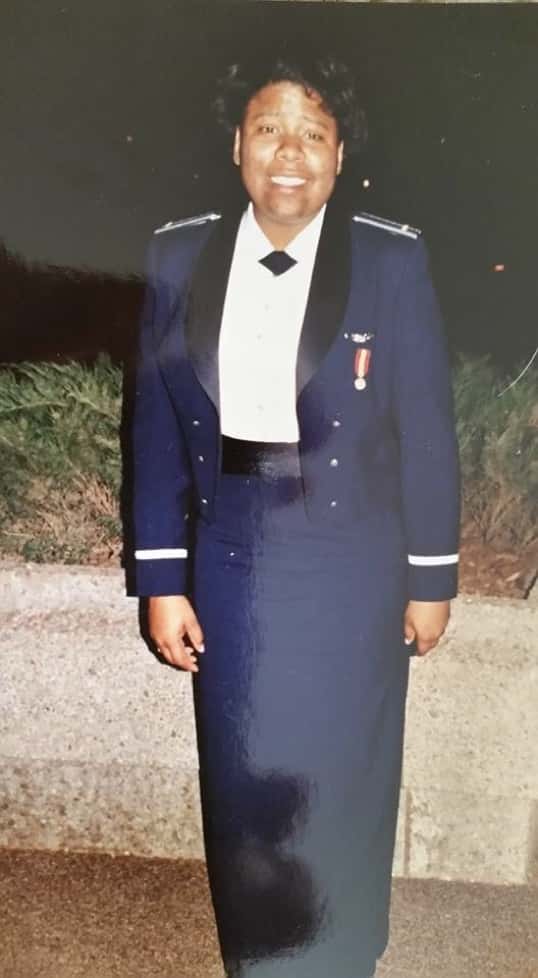 The washout rate was around 50-60 percent.

All candidates went through pre-flight training that lasted six weeks, needing to demonstrate their basic cognitive and physical skills flying a small plane, a Cessna. Thompson flew twice a day and got quizzed on a regular basis.

Since women weren’t allowed to enter combat, Thompson had a choice between flying air refuelers or cargo planes, choosing the former.

"Military flying is a much different route than going the private pilot way," she said. "It's much more difficult I would say. Maybe I'm a little biased but you definitely turn out better pilots just because of the environment that we're in."

Graduation day was emotional for Thompson and her father, Col. James E. Thompson, who pinned wings on her.

"I can't speak for him, but we both had tears in our eyes,” Thompson explained.

And for good reason.

"That was probably my greatest achievement in my life was to get those wings to know that I accomplished that," she said. "One, I'm female. I was the only female in my class and probably two classes in front of me and two classes behind me. And being a Black female on top of that."

Some three decades ago, the challenges for women were even more extensive than today and even more so Black women.

"The challenges were like you would expect of a very early 1990s military, a very conservative military where a lot of the senior leadership do not want to see woman flying,” she said. 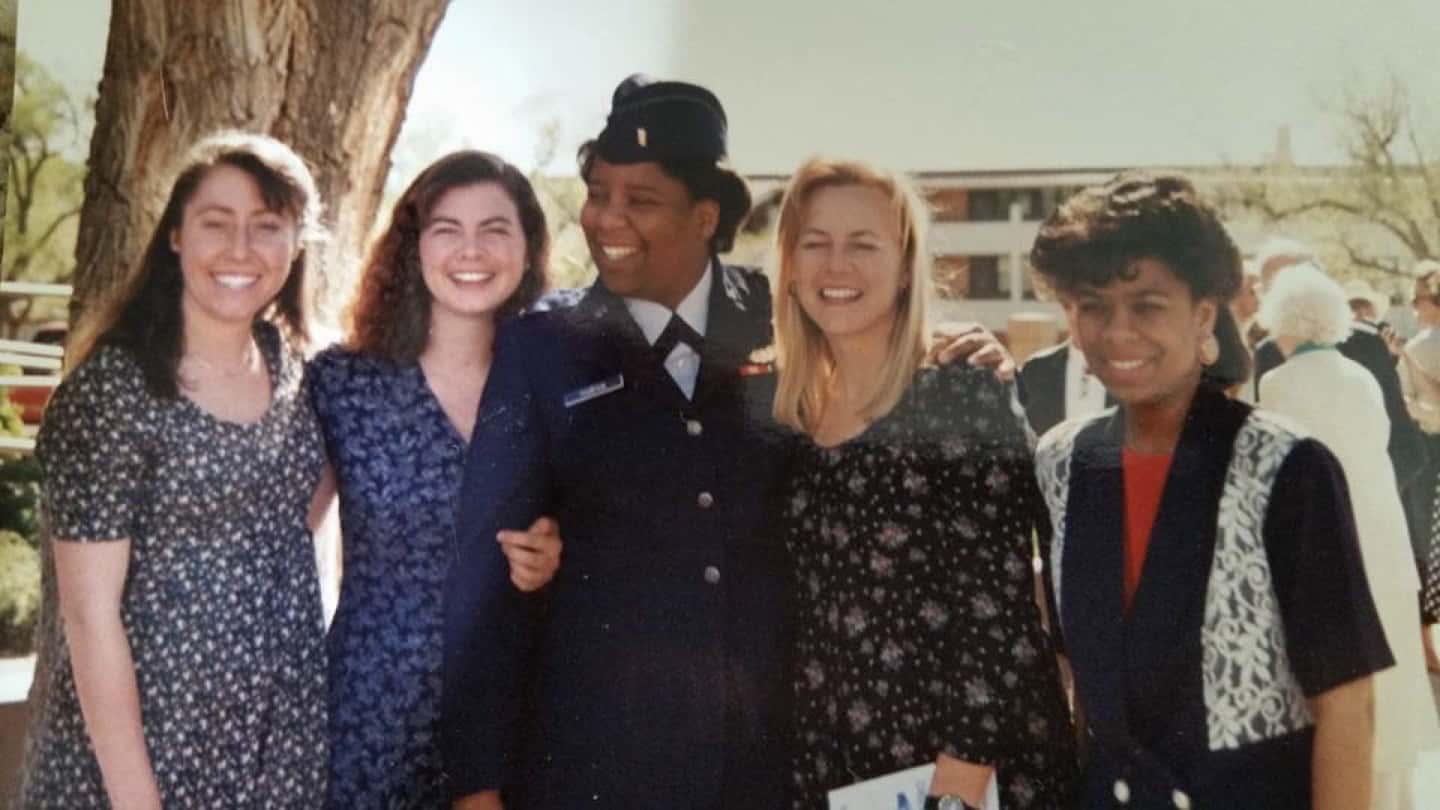 Thompson (center) was one of few women in the pilot corps and noted the lack of female role models.

Thompson, 50, wished she’d had women to turn to for advice and support.

"I did not have any female role model in the military," she said. "We were few and far between. It created the same challenges that many females face in any profession or career where you are the only one that looks like you in the room. My father was my mentor in the military."

Based out of the Tennessee Air National Guard, Thompson started as a first lieutenant and co-pilot before promotion to pilot and captain. For every mission in the KC-135 Stratotanker refueler, the crew discussed it thoroughly, "even to the detail on how you're going to walk around the plane before you take off," Thompson said. 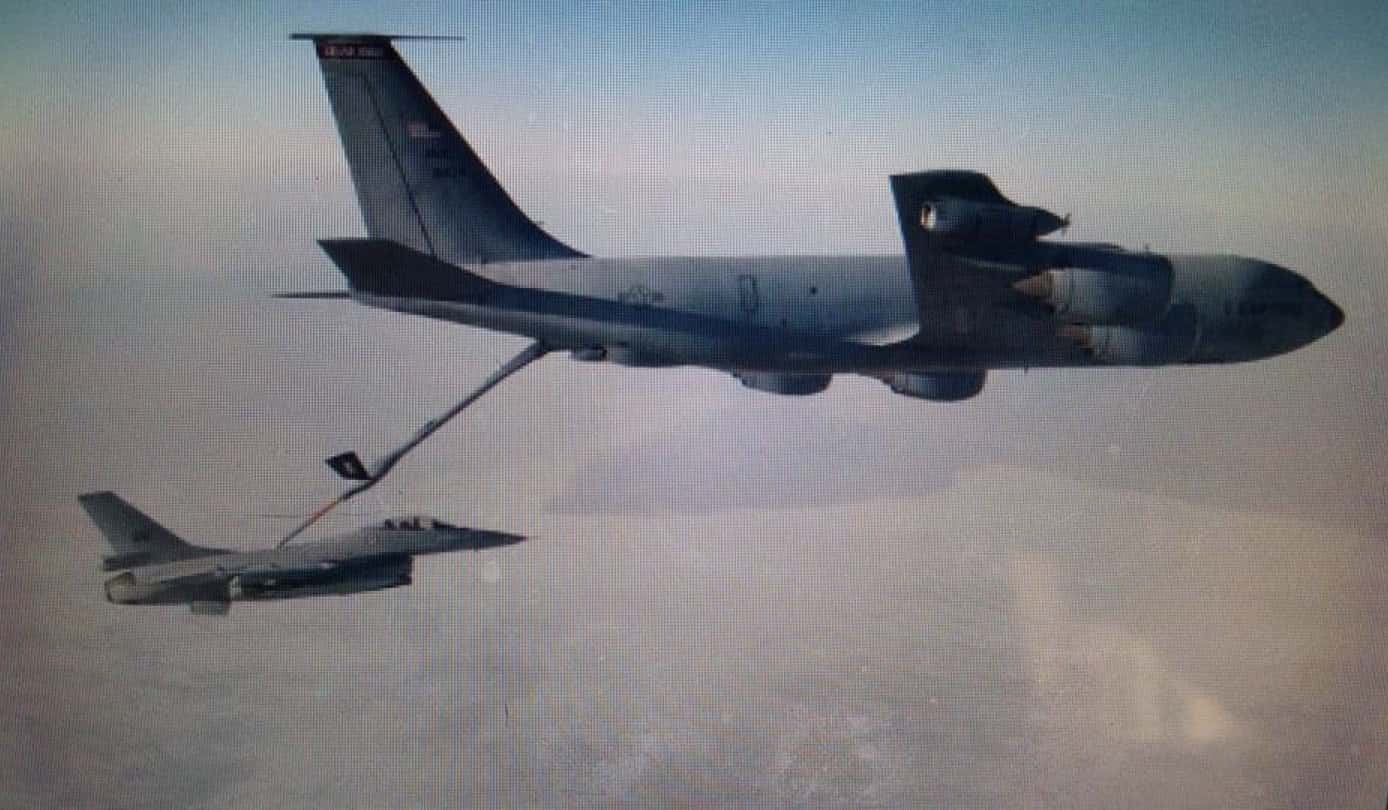 Thompson frequently flew refuelers like the KC-135 pictured above.

While in the air, the plane flies to "a track" in the air for refueling.

"They're just like a running track but up in the sky," Thompson said. "We fly up and within the track and the other plane comes up and meets us to refuel."

After returning to base, the crew was debriefed on every part of the flight.

"It's a very methodical, procedural thing you go through every flight," Thompson said. "By the time you fly two or three years, it’s pretty automatic except for when you are refueling a plane. That's when things get touchy because the different the type of plane, it creates different types of drag and pull on your plane. You have to react differently."

Thompson loved flying. She said she would have stayed for her full 20 years if she had flown fighters.

"I was more excited to do more of that type of flying, which you do a lot of formation flying, low level flying, tactical flying,” she said. “When you're doing air fueling, I enjoyed it for a while but after while it became monotonous. You're just doing the same thing. After a while, I'm not being challenged where I want to be. That's why I started looking at other avenues."

Thompson flew for nearly six years before receiving an honorable discharge in 2001 and diving into the challenges and opportunities of a career in coaching and coaching education. As of late, her work has focused on creating a comprehensive mentorship program for women in coaching and providing the next generation with the support she wishes she had in her own journey.

The project officially came to life on October 6 with the launch of the Jill Ellis Scholarship Fund and SheChampions Mentorship Program. The 22 women seeking their A Youth and A Senior (geared for the college and professional levels) licenses this year have been paired with highly accomplished mentors. At the end of November, the Pro License candidates will begin working with theirs.

All candidates are also having half their tuition paid by the Scholarship Fund.

"We've had so much feedback, just going back to the announcement of the program," Thompson said. "There was so much excitement and buzz and then we had a kickoff webinar. The caliber of mentors we have in our program is exciting. You can feel the excitement of everybody that was in there. I would say it is a who's who of coaches in the United States. You can feel the excitement and the thrill of them being part of an organization and part of a program."

Mentors include three former U.S. Women's National Team coaches - Anson Dorrance, the University of North Carolina women's coach who guided the USA to the first Women's World Cup title in 1991, April Heinrichs, who directed the U.S. to the 2004 Olympic gold medal, and Ellis, who won back-to-back world championships in 2015 and 2019.

Thompson, who lives in Kansas City, Kansas, has known Ellis for quite a while.

"When U.S. Soccer said to me, 'We want to put these two programs together, the Jill Ellis Scholarship Fund and the SheChampions Mentorship Program, I was ecstatic," she said. "Jill has really taken to this program with everything that she has. I was just talking to her last week. She is just so excited about her mentee and the conversations they’ve been having. She's going to go and visit her. It's just that kind of excitement from somebody with such accomplishments that is humbling for me." 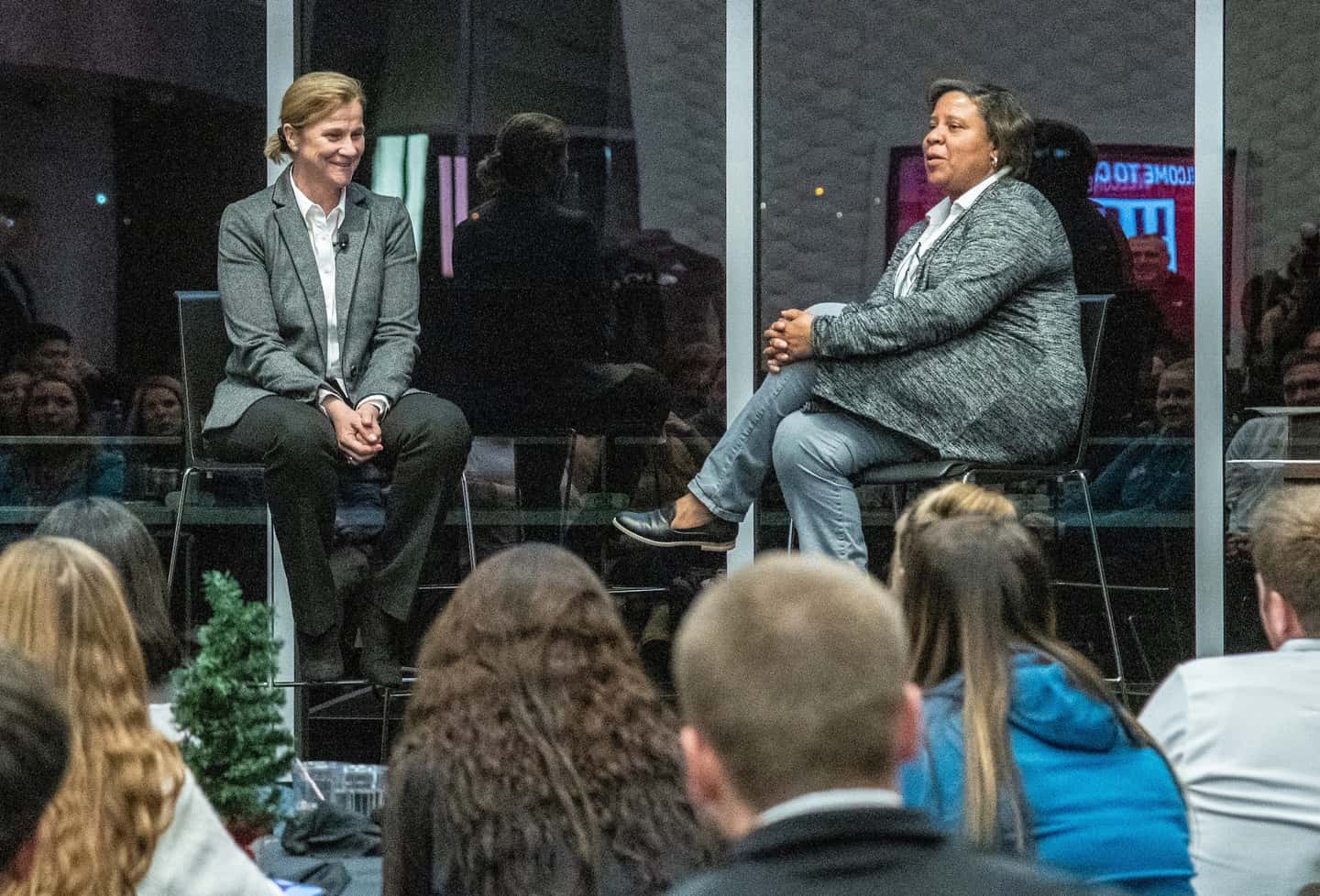 Plans are to add 30-35 candidates at the B License level and expand mentorship opportunities to the C License levels over the coming years, Thompson added, and to create a template that be given out to U.S. Soccer member associations.

"So, they might be able to implement a mentorship program at their level," she said.

There's plenty of work to do. Sky Blue FC's Freya Coombe is currently the only full-time female head coach in the National Women’s Soccer League. Only nine of the 24 head coaches at the 2019 FIFA Women's World Cup were female.

"As a female coach, you definitely have a lot of barriers you have to break down,” said Thompson. “One of those is a cultural barrier in that men are better coaches than women, even better coaches of women.

"I never played for a female coach and a lot of my colleagues and friends can say the same thing. It has become a recent change where players have female coaches. It's a struggle. It's hard because I tell a lot of people that women coaches, especially at the elite level, have about a 25 percent chance of even getting looked at for a position."